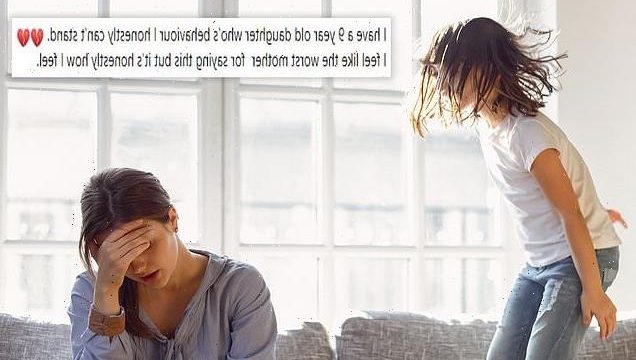 A Sydney mum has ranted about her nine-year-old daughter’s constant temper tantrums, whining, and ‘immaturity’ in a long Facebook mummy group post.

‘This is going to sound horrible, but I please try and be kind because I feel terrible already,’ the mum wrote. ‘I have a daughter whose behaviour I honestly can’t stand,’ she said.

She claimed to feel like the ‘worst mother’ for admitting to her feelings, but her daughter’s antics have her ‘at her wits end.’ 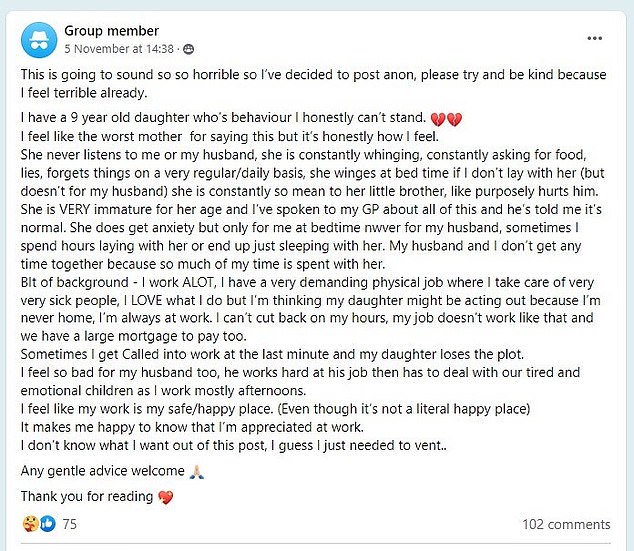 ‘This is going to sound horrible, but I please try and be kind because I feel terrible already,’ the mum wrote on a Facebook group as she pleaded for advice

The mum revealed that her daughter ‘never’ listened to her or her husband, is ‘constantly whinging,’ lying, and is ‘always mean’ to her little brother.

‘She is VERY immature for her age,’ the mum said. ‘I’ve spoken to my GP about her behaviour, but he says it’s normal. My daughter also gets anxious at bedtime, but only for me. I spend hours laying with her or end up just sleeping with her.’

But one of the greatest problems was the lack of time the mum got to spend with her husband.

‘My husband and I don’t get any time together because so much of my time is spent with her,’ she said sadly. 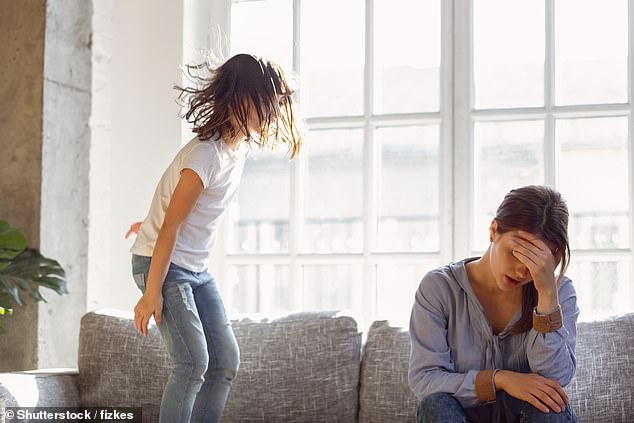 The mum revealed that her daughter ‘never’ listened to her or her husband, is ‘constantly whinging,’ lying, and is ‘constantly mean’ to her little brother

The mum speculated that the root of the problem was her job – where she works long hours caring for sick patients.

‘I work a lot, I have a very demanding job,’ she said. ‘I love what I do but I think my daughter is acting out because I’m never home. I feel like my work is my safe place, and it makes me happy to know I’m appreciated at work.’

She cannot cut back on her hours and the family is additionally struggling to pay a very large mortgage.

The mum added that while she just needed to vent, she would appreciate gentle advice from other parents in the community.

A mother who admitted to regretting having her daughter revealed she doesn’t like the five-year-old child, and doesn’t want to be responsible for her for another 13 years.

The anonymous woman, thought to be US-based, shared her thoughts on Reddit’s ‘regretful parents’ forum, where those who wish they hadn’t had children support others in the same position.

In her post, the woman described her daughter as ‘competitive and a sore loser’, as well as saying that the child has no friends because other mothers think she is mean. 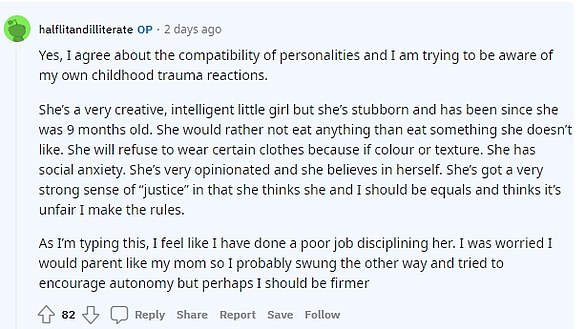 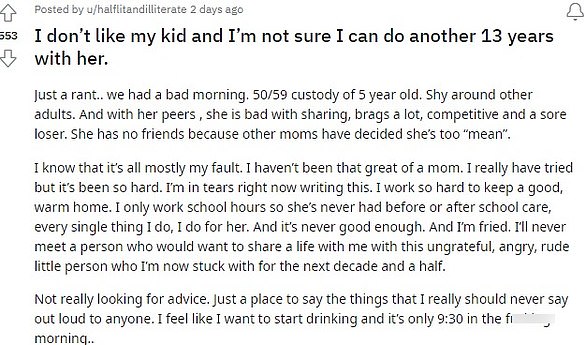 ‘It sounds like you’re burnt out,’ one mum said. ‘You need to put yourself first – which might mean looking for another job or seeing a psychologist to help with some tools to deal with your daughter’s whining.’

‘Downsize your house, mortgage, and work hours,’ another advised. ‘Things don’t matter, people do, and your child is crying out to feel loved and valued. Their childhood will be over in the blink of an eye but the resentment will last a lifetime.’

Other mums focused on validating her negative emotions.

‘We don’t live in a utopian world where we love our children and take pleasure in being mums at all times,’ one mum bravely admitted. ‘What’s lovable about a whining toddler or hostile adolescent?’

She added, ‘Negative feelings are a part of any relationship, and acknowledging that makes room for other emotions like love.’