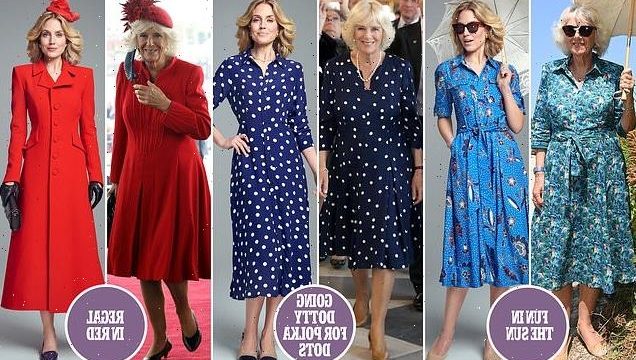 Move over Kate… Camilla is the new Queen of the High St! How Duchess of Cornwall is putting on the style and outshining even her most glamorous relatives, writes JENNIE BOND

Camilla never set out to be a fashion icon: jeans and wellies, probably slightly splattered with mud, have always been much more her style.

But, as surprising as it sounds, the Duchess of Cornwall has inspired many of this season’s key pieces. Move over, Kate — Camilla is the new royal trendsetter.

From her tweed blazer and cute loafers to flattering raincoats and belted shirt dresses, her signature look is everywhere and, crucially, affordable.

As the BBC’s former royal correspondent, I first met Camilla at Clarence House when she invited me to a reception to publicise her work for the Osteoporosis Society in 2006.

What struck me then was not her clothes — smart daywear — but her deep, warm voice.

The voice of a mature woman who didn’t need to dress ostentatiously to be noticed.

Princess Diana was a far more natural style icon, but few of us have ever possessed the willowy stature she had that meant the great fashion houses lined up to dress her.

Physically, Camilla has always been much more your Everywoman.

Camilla now adopts styles that can suit the majority of over-50s, from denim jeans to the colourful print frocks

Camilla, pictured as she attends the Headquarters of the Bank of England in October 2020 and her look copied by a model

These days, she adopts styles that can suit the majority of us over-50s, from denim jeans to the colourful print frocks she wears so easily at less formal royal engagements.

And she has learned the art of having a number of key items in her wardrobe and working around them — the Chanel pumps, the Burberry mac.

I don’t often wear designer gear myself; you’re more likely to find me in Marks & Spencer.

But I am surprised by how often I find myself admiring what the Duchess is wearing, planning how I can emulate her look and colour scheme for half the price.

Now that she’s been given the High Street stamp of approval, it’s one look that’s well within my budget and yours.