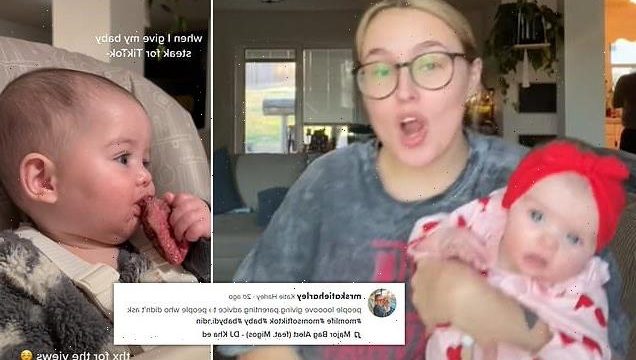 A mother who filmed her baby eating a medium rare steak has divided opinion after critics warned the five-month-old girl is too young.

Katie Harley, 23, from South Carolina, who regularly shares her family life on TikTok, went viral after sharing a clip of her daughter Eliza enjoying a steak.

The baby girl appears delighted to be eating the meat as she slowly chewed at it in the short clip, which has racked up almost 200,000 views.

Critics were quick to argue that it’s ‘dangerous’ for five-month-old Eliza to eat medium rare steak, but others defended Katie saying they’ve also fed their own young children steak. 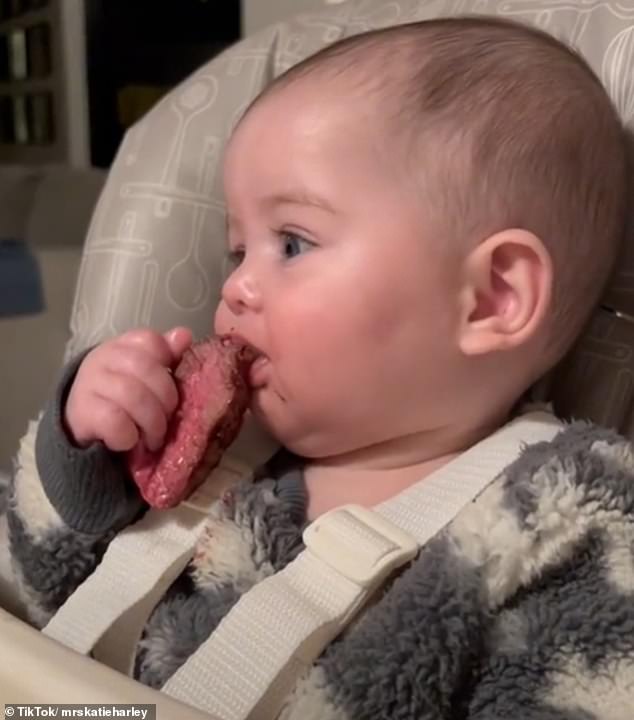 Katie Harley, 23, from South Carolina, went viral on TikTok after sharing a video of her daughter Eliza (pictured) eating a steak

Katie responded to one commenter explaining that she has researched if it’s safe to feed an infant steak.

The mother explained that she only gives Eliza food that she feels comfortable eating herself.

She uploaded a second video of her daughter eating a steak, captioned: ‘People loooove giving parenting advice to people who didn’t ask.’

Eliza’s sweater and high chair gradually becamse covered with pink juices from the meat as she tucked into the steak in the clip. 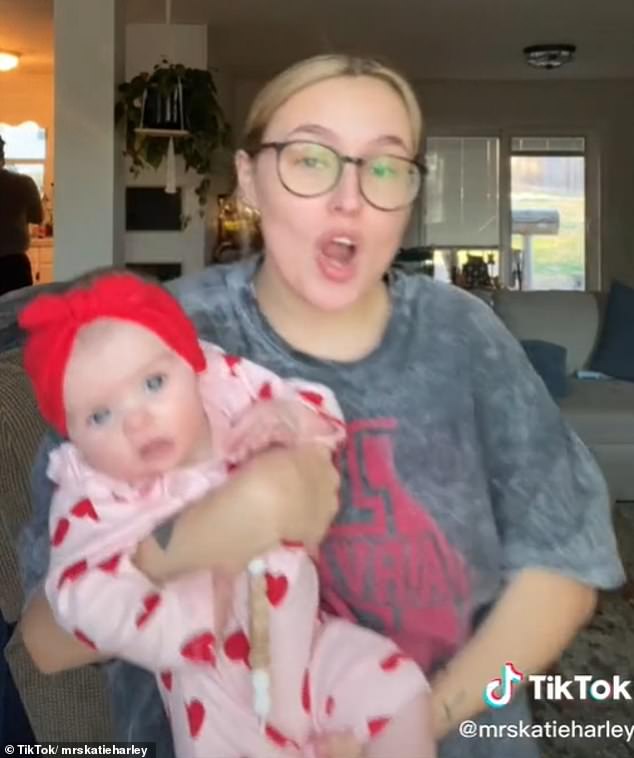 Among the critics was one, who wrote: ‘I just asked Google and it said no rare or medium rare meat for babies or young toddlers. Their stomachs can’t handle the potential bacteria.’

Another said: ‘Too red for me, I won’t even eat it like that. Steak is so easy to choke on. My grown niece chocked on it not long ago, so scary’

A third added: ‘That’s not even cooked.’

The Baby Centre website claims children can be given meat from six-months-old and it’s important to introduce other sources of iron because the stores that were built up while the mother was pregnant will start to run out.

‘You may prefer to start with soft, cooked poultry, such as chicken. But you can also introduce red meats, such as pork, beef or lamb.

‘Always take care to cook any meat thoroughly, until the juices run clear, and remove any bones,’ the website reads.

Solidstarts.com also offers advice to parents who want to give their children meat, advising that is should be prepared in age-appropriate way to minimize the choking hazard.

Children aged six months should be offered a large strip they can chew on, and once they reach a year it can be cut up into smaller pieces. 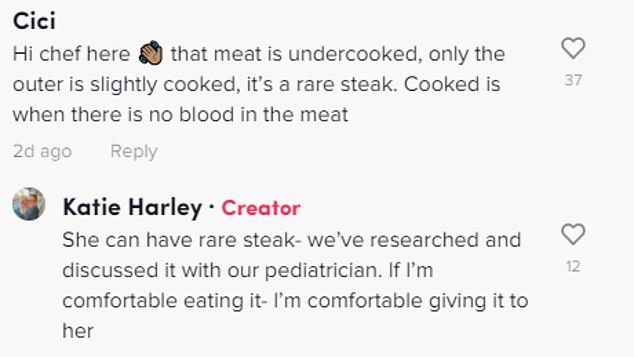 One person wrote: ‘It’s good for them and encourages jaw development and strength.’

‘My son was six months eating steak… nothing wrong here. People will get mad at anything that doesn’t concern them,’ another commented.

Another said: ‘Every think the baby was anemic? I was told by our pediatrician to give my son steak to up his iron’

Others claimed they’ve fed their own children steak, while accusing critics of getting ‘mad at anything’