Having filmed almost the entirety of her latest movie in a UK hotel room, it was a welcome relief for Emma Thompson to get some fresh air while visiting Sydney Harbour.

Promoting the British sex comedy Good Luck to You, Leo Grande, Thompson and co-star Daryl McCormack took a stroll to Mrs Macquaries Chair on Saturday morning as part of their world tour.

Thompson said the film was “one of the most intense things I’ve ever had to do”. 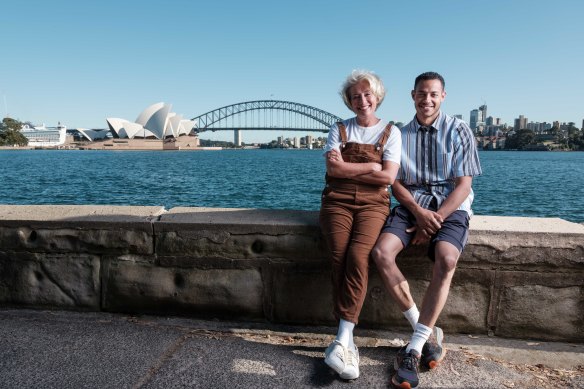 Stars of the film Good Luck to you, Leo Grande Dame Emma Thompson and Daryl McCormack in Sydney this weekend to promote its recent debut.Credit:Oscar Coleman

McCormack plays a sex worker hired by a former religious studies teacher (Thompson) to explore new things after the death of her husband.

Being photographed on a perfect Sydney Saturday, he joked they should pose as the couple from the film, taking a holiday around the world.

Dealing with issues of sexuality, body positivity, pleasure and love, the film was brought to life by Australian director Sophie Hyde.

She’s one of the reasons Thompson and McCormack decided to make the journey to the other side of the world to promote the film.

“Sophie’s an incredible director,” Thompson told Today. “I just wanted to come and really say here to Australians that she was an incredible person to work with.”

“Both of the people in this movie we’ve never seen before.” she said. “Nancy (Thompson’s character) is normally the person that other people are doing interesting things around … It’s an utterly original piece.”