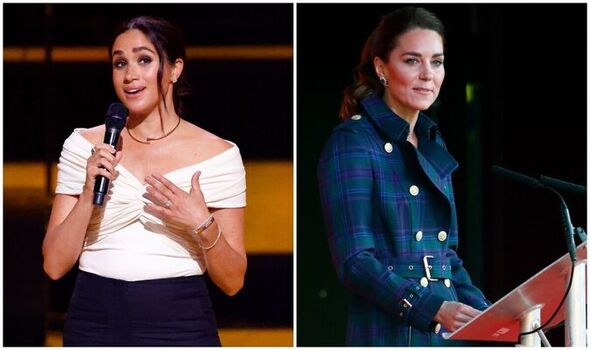 Meghan Markle, 41, attended the prestigious Northwestern University in Illinois. According to a study, the Duchess of Sussex ranks above all other Royal Family members when it comes to the quality of academic institution she attended.

Northwestern University, where Meghan studied a double major in Theatre and International Relations, places 30 on a list of over 1,350 institutions in the QS World University Rankings.

This is 61 places ahead of the University of St Andrew’s, which is the second-best institution attended by a royal in this survey.

The research, by international education provider Oxford Royale, analysed QS World University Rankings to discover which royal is the most intelligent.

Kate Middleton and Prince William are a royal power couple when it comes to intelligence, placing second and third on the list of most intelligent royals respectively.

The Prince and Princess of Wales met and fell in love when Kate was studying History of Art and William was studying Geography at the University of St Andrews.

The dazzling duo started off as friends but sparked a romance after Prince William saw Kate model at a university fashion show.

Although the royal couple attended the same institution, Kate pips William to the post when it comes to intelligence, getting AAB in her A-Levels, ahead of William’s grades of ABC.

Princess Eugenie takes the crown as the UK’s fourth smartest royal. The Princess studied History of Art and English Literature at Newcastle University, which ranks 134 out of all universities on the QS World University Rankings list.

In addition, she achieved AAB in her A-Levels. Despite Eugenie’s sister Princess Beatrice also achieving strong A-Level results (ABB), Eugenie comes out top when it comes to brains.

This is because Newcastle University ranks 327 places above her older sister Princess Beatrice’s choice of university, Goldsmith’s.

Peter Phillips and Zara Tindall, the children of Princess Anne, also rank high on the list of most intelligent royals.

The royal siblings both attended Exeter University, which places 149 on the QS World University Rankings list.

A spokesperson for Oxford Royale commented on the findings for Express.co.uk, arguing that the Duchess of Sussex is “unashamedly brilliant”.

They said: “Meghan Markle is an unashamedly brilliant woman, and her refusal to remain silent on complex, controversial issues from racism and injustice to period poverty and the need for paid parental leave is a testament to her intelligence and academic pedigree.

“Despite the fact that as the wife of Prince Harry, Meghan has married into a royal tradition of neutrality on key political issues (to preserve the stability of The Crown), the Duchess of Sussex has never let this prevent her from expressing her beliefs openly and articulately.

“Not only has Meghan had a successful career as an actress, but she also completed a degree in of the most complex and rigorous subjects available – International Relations – at a top academic institution.

“This has given her excellent preparation for a life and career where she will communicate continually with the public.

“Meghan and Harry’s marriage is a multi-skilled partnership; while the Prince opted not to attend university and serve in the army instead, the resilience and lateral thinking skills he will have gained from his military career, coupled with the natural empathy he has inherited from his mother, Princess Diana, will bring great strength to the couple as they navigate a lifetime in the spotlight.

“While the public focus is always on Kate Middleton’s impeccable fashion sense and style, she also shines as the second most intelligent member of the UK Royal Family.

“With impressive A-Level results and a degree from one of the UK’s strongest academic institutions, she is well equipped for a role which requires careful curation and intelligence.”