“Who invited them?!?” screams Mama June.

What should have been a nice family gathering for Ella’s birthday went off the rails thanks to Mama June and Sugar Bear’s wife, Jennifer.

While the bad blood between the two “Mama June: Road to Redemption” stars is nothing new, they did a pretty good job of avoiding each other following June’s sobriety … until now.

In this sneak peek at tonight’s new episode of the WEtv show, June and boyfriend Geno Doak are clearly caught off guard when Jennifer and Sugar Bear show up to the bash for Lauryn “Pumpkin” Shannon and husband Josh’s daughter.

“Who invited them?!” she exclaims as the two arrive at the party, before Pumpkin asks her other half the same question, seemingly unaware he had extended the invitation. “What the f— are Jennifer and Sugar Bear doing here?” she asks. “That man is my boss, I had to invite him,” he replies.

“You did not have to invite nothing!” she shoots back, before he says he didn’t expect them — or June and Geno — to actually show. 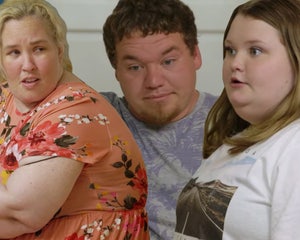 In a confessional, Sugar Bear says he only showed up so he could spend more time with his daughter, Alana “Honey Boo Boo” Thompson. But, he adds, now that’s June is there, he doesn’t “see that happening.”

“I just hope Jennifer can keep it together, because she can only go so long biting her tongue,” he says … before Jennifer starts letting loose. As June exclaims “all the big [presents] are from me,” Jen barks back, “You’re just trying to buy her love!”

When little Ella says “Thank you” for her present, Jen then tells June, “At least someone in this family has a little manners.”

The footage ends with Jessica saying in a confessional, “These two need to get it together or get out.” Find out what happens when “Mama June: Road to Redemption” airs Fridays on WEtv.