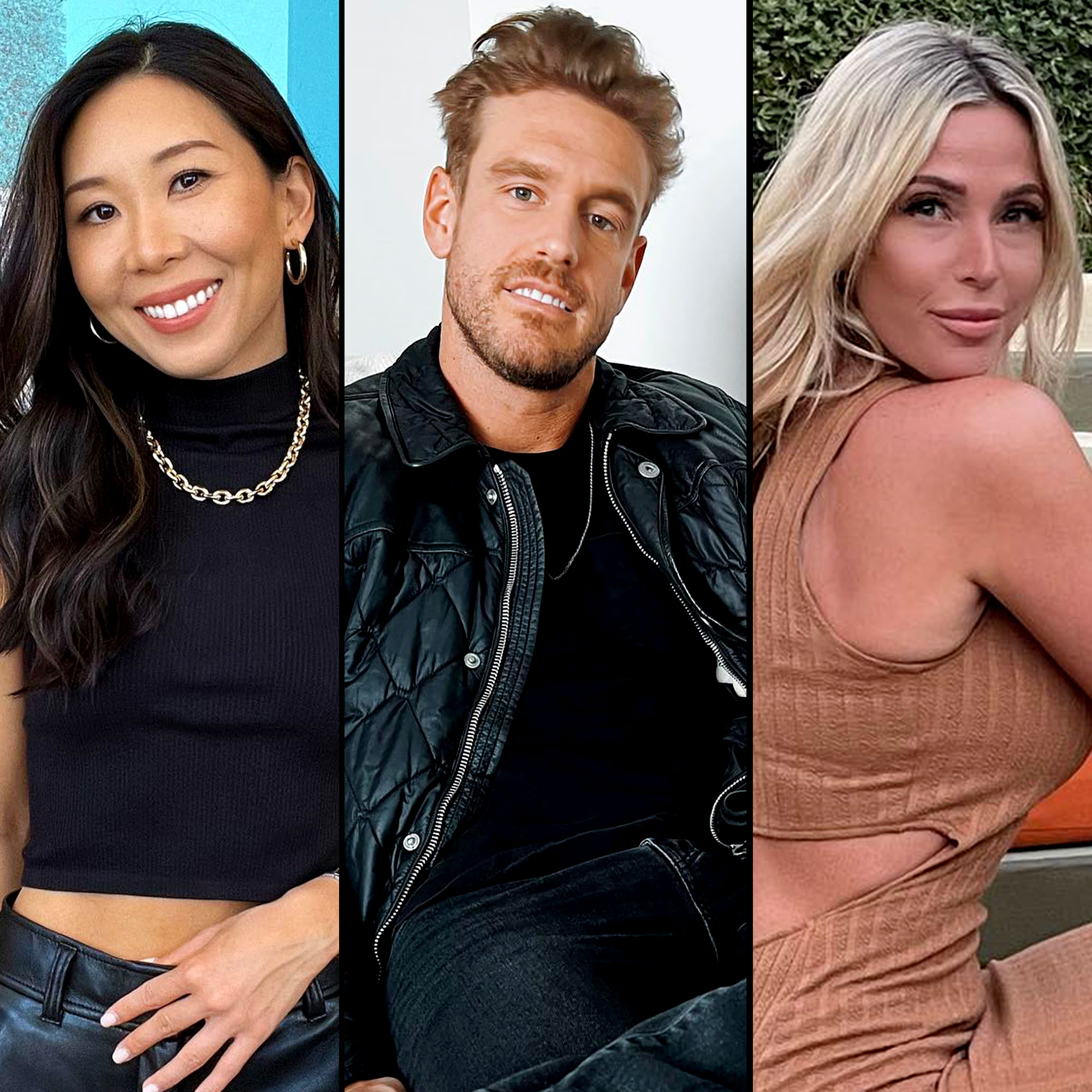 Sharing her side. Love Is Blind alum Natalie Lee responded after her ex-fiancé, Shayne Jansen, discussed their relationship on Nick Viall‘s podcast — and she had a very different story to tell.

Getting Messy! Relive the Biggest Drama on ‘Love Is Blind’

“I know about the podcast and am very shocked by what was said,” the consulting manager, 29, began in a lengthy post shared via her Instagram Stories on Wednesday, March 30. She went on to list several things she wanted to “clear up” about what Shayne, 32, said during the Wednesday episode of “The Viall Files” podcast.

“Regarding the comment about me ‘scripting’ our conversations: I never told Shayne what to say nor did we ever discuss or plan what to say in certain scenes,” she wrote, referencing Shayne’s claim that she — “to a certain extent” — tried to anticipate what they would say during the show. “I did, however, set boundaries with filming — specifically I asked him not to drink alcohol before ‘serious’ scenes and not to share in-depth details of our intimacy out of respect for my family. I know he found this frustrating; the latter is what led to our fight in Mexico.”

Natalie went on to deny Shayne’s claims that they tried to rekindle their romance four times after filming wrapped. “We dated twice after our wedding, not four times,” she wrote. “We rekindled the weekend we filmed the reunion episode but decided to keep the door closed. Recently we met up to discuss the possibility of reconciliation but ultimately agreed not to date until he changed some of his behaviors. A few days later, I fully closed the door for any type of reconciliation after discovering some lies he told me.”

From the Pods to the Weddings: Behind-the-Scenes Rules of ‘Love Is Blind’

While speaking to the former Bachelor lead, 41, Shayne claimed that Natalie was still hung up on what happened between him and Shaina Hurley during filming, but in her Instagram post, Natalie claimed that was not the case. According to Natalie, it was actually Shayne’s actions that caused them to split again after they rekindled their relationship following the show. 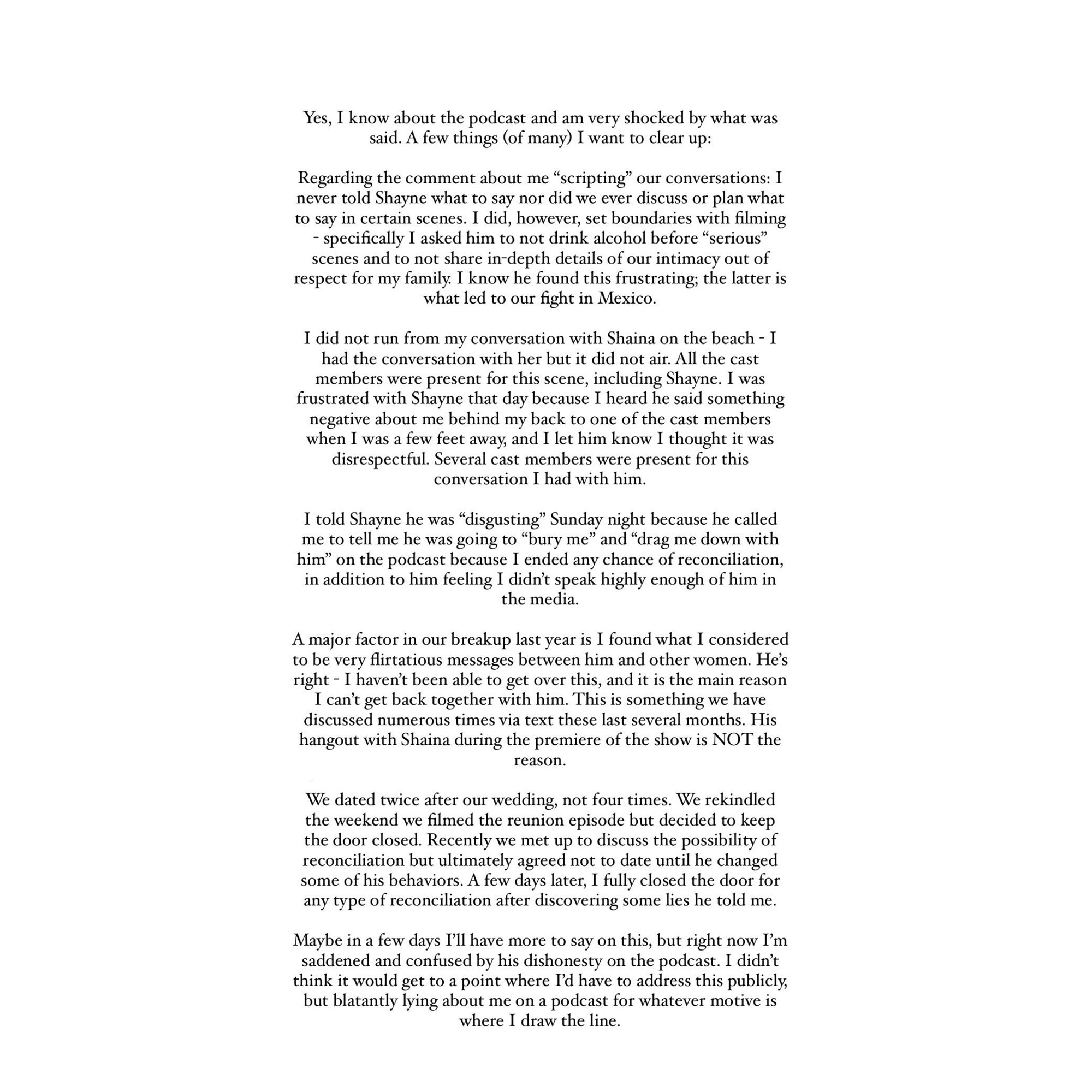 “A major factor in our breakup last year is I found what I considered to be very flirtatious messages between him and other woman,” she claimed. “He’s right — I haven’t been able to get over this, and it is the main reason I can’t get back together with him. This is something we have discussed numerous times via text these last several months. His hangout with Shaina during the premiere of the show is NOT the reason.”

Natalie also denied Shayne’s claim that she ran from Shaina, 32, when they were supposed to have an on-camera discussion during the show. “I had the conversation with her but it did not air,” Natalie wrote. “All the cast members were present for this scene, including Shayne.”

She went on to confirm that she recently told Shayne he was “disgusting,” but she offered more alleged context for her comments. “I told Shayne he was ‘disgusting’ Sunday night because he called me to tell me he was going to ‘bury me’ and ‘drag me down with him’ on the podcast because I ended any chance of reconciliation,” she claimed.

Natalie and Shayne were one of five couples to get engaged during season 2 of Love is Blind, which premiered on Netflix last month. They split on their wedding day, but Natalie previously told Us Weekly that they tried to rekindle their romance shortly after filming ended.

“Maybe in a few days I’ll have more to say on this, but right now I’m saddened and confused by his dishonesty on the podcast,” she concluded in her post. “I didn’t think it would get to a point where I’d have to address this publicly, but blatantly lying about me on a podcast for whatever motive is where I draw the line.”