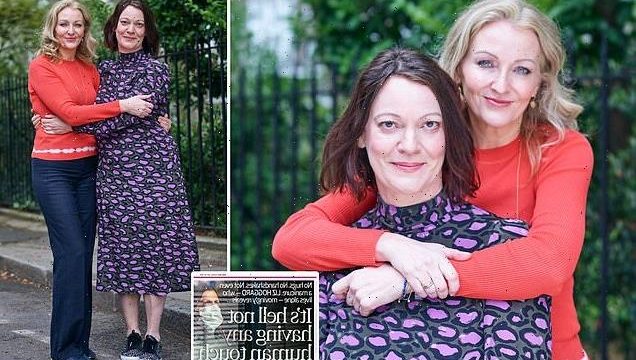 Rigid with effort, I’m trying to remember how people actually embrace. Something that was once so effortless now feels tricky.

I lurch forward; Helen steps back, slightly in shock. Then she laughs and throws her arms wide.

I’ve never understood the concept of ‘skin hunger’ before, but it feels amazing to be allowed to hug my best friend after 17 long months. I can feel the serotonin and oxytocin flooding my body.

Yet I’m not used to feeling physically shy with Helen.

We first met ten years ago at a fashion party in our 40s. She had gatecrashed. The party was being held near her flat and she claimed the noise made it impossible to sleep. I remember watching this blonde woman in Louboutins march up to the snooty PR and demand to be let in. ‘Hmm,’ I thought. ‘She’s a piece of work.’ I made a mental note to avoid her. 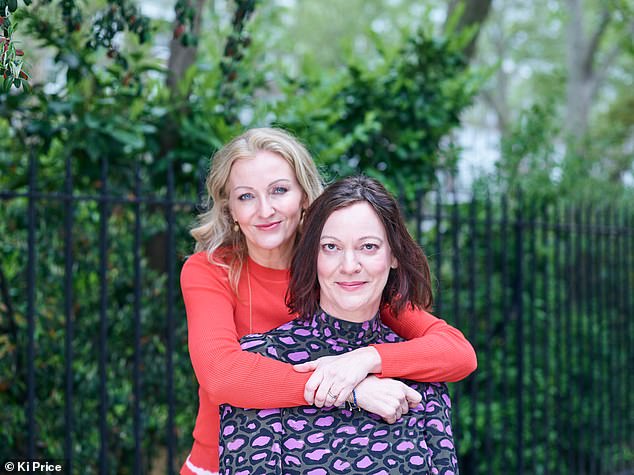 Liz Hoggard who went viral with an article about missing human touch, shared reconnecting with her best friend Helen. Pictured: Liz and Helen

But to my amazement, she came up to me and said: ‘You look as if you’re over 38 and have something to say for yourself.’ She gestured at the room of gorgeous twentysomethings and grimaced.

That was it, we were off. We talked, danced and put the world to rights. Since then, I’ve gone for suppers, lunches and holidays with Helen and her husband and daughter, and often sunk illicit cocktails. She’s the person I call if something bad happens. She’s the person I call if something good happens. So there was no question that she’d be my first embrace.

Today is the day we are officially allowed to hug family and friends from other households for the first time in more than a year.

It should be a glorious day. But still I feel slightly terrified. After a year of being suspicious of other people, of their very breath, voice, scent, where even a simple brush of the shoulder feels transgressive, can we suddenly turn on the tap of tenderness again?

Over the past year, I’ve longed to hug Helen but it felt as if there was an invisible force-field keeping us apart. Keeping us safe.

Today I feel guilty about my level of privilege. I’ve been vaccinated (with a second jab at the end of this month). I work mostly from home. I’m in my late 50s, so most of my friends are awash with antibodies. They are probably the safest people in the country. 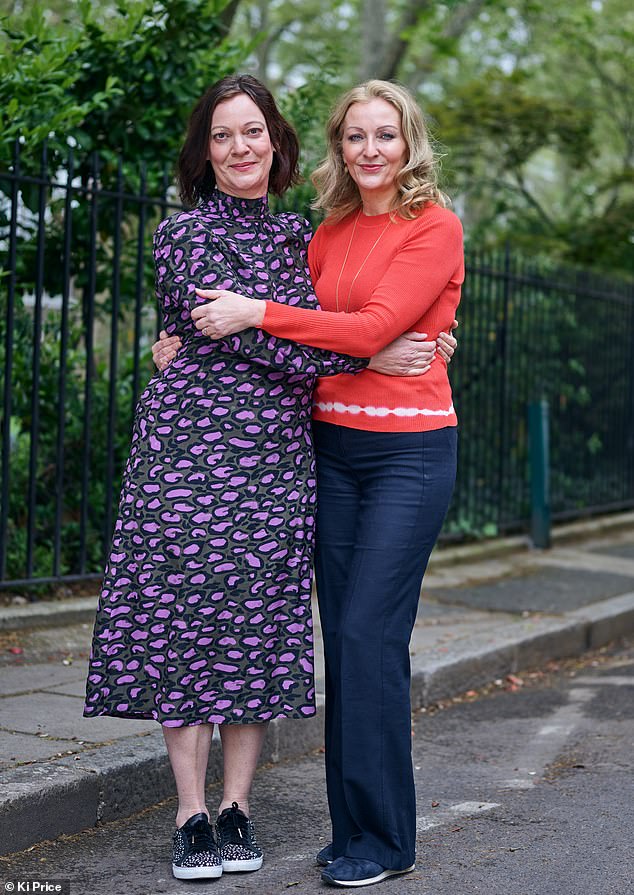 Liz said her body is still on high alert and scanning for a rogue encounter that might prove deadly, despite the lifting of restrictions. Pictured: Liz and Helen

But a small alarm inside me is ringing: maybe we need more time to renegotiate our relationship with touch?

Despite the lifting of restrictions, my body is still on high alert, scanning every room for a rogue encounter that might prove deadly. I wash my hands like Lady Macbeth and no longer think of masks as the enemy.

Yet I love my friends and family and have missed their 3D presence so dearly, it felt like a physical ache. There are few greater joys in life than gossiping with close pals, pressing a friend’s knee, brushing their arm. Touch brings us together, spells out that you are valued — and seen. 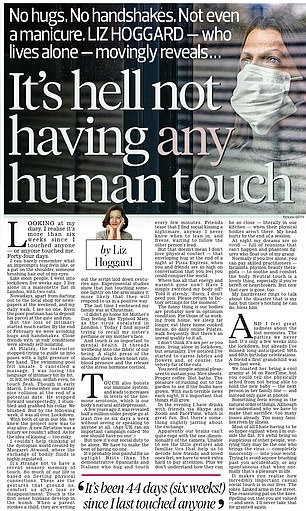 Pictured: Liz’s story a year ago

I only managed to see my mother (85 this year) and sister for a fleeting weekend in December, before the London drawbridge was hauled up again. I haven’t seen my youngest sister and her partner for over a year. At the last minute I turned down Christmas indoors with Helen and her family because I just knew infections would spike horribly in the new year. I’m grateful that I saw sense, but it felt inhumane. I’ve danced in Helen’s kitchen to Sister Sledge at Christmas for the past ten years. They’re my London family, my tribe.

And I know how a year in social isolation can lower our morale. In April last year, I wrote a heartfelt piece for the Mail about the psychological effects of living without human touch, which to my astonishment was picked up by TV and radio. I even appeared on Newsnight, live from my kitchen, my iPhone balanced on a mug.

As presenter Emily Maitlis quizzed me on the best way to cope alone in a pandemic, I realised we’d ‘touched’ a raw nerve.

Letters and emails arrived from people offering their own sanity-saving tips (Netflix shows, planting bulbs, truffle oil, live-streamed theatre). And I needed them.

At the time of the Newsnight interview, I was only six weeks into my nun-like existence. But already, like so many single householders, I was going slightly mad.

I live in a small maisonette in South London. I don’t drive or cycle, and public transport was then banned except for key workers. A promising date with a librarian, ‘M’, fell by the wayside (we were too busy trying to stay alive). 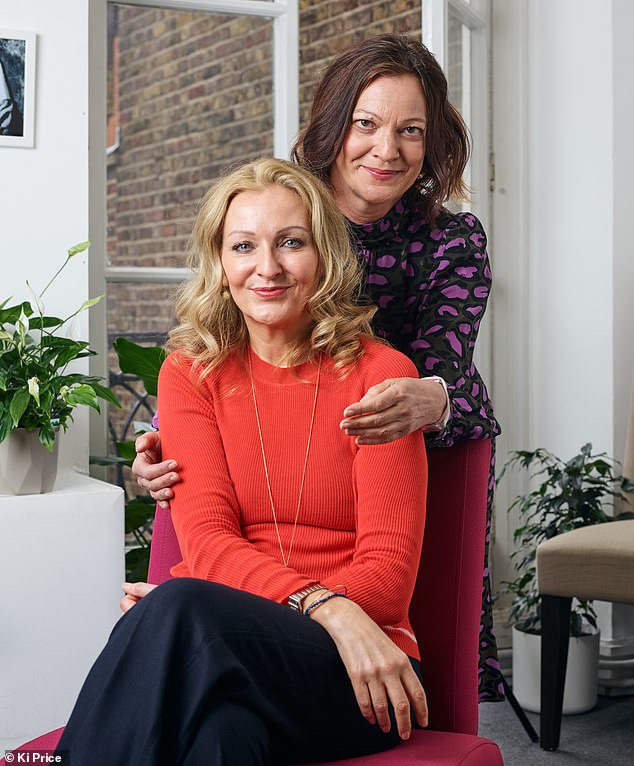 Liz said single households suffered the most in lockdown and felt like the demographic the Government forgot. Pictured: Liz and Helen

After solitary walks in parks, I would scuttle home, steam my clothes at 40 degrees and leave my shoes outside in a box.

In this new parched-earth landscape, it felt so strange not to have a recent sensory memory of touch. So much of our life is based on fleeting physical connections that ground us, comfort us after loss or disappointment.

Then, last May, my younger cat stopped eating. I will always love the vet for letting me take her into the surgery, in full PPE, the day before she died. I buried her under a tree and wept. I would so have loved a hug.

The year wasn’t all bad. It turned out ‘M’ the librarian lived four train stops from me and, in an unlikely plot twist, we ended up together last summer. Staying overnight with someone new filled me with trepidation, of course, and I felt guilty every time I went home from his house, double-masked in a taxi.

I remained hyper-vigilant about strangers and even now feel a shock when I see people touch each other in films or TV shows.

When the second lockdown hit, it was a real body blow. I’m inordinately grateful I was able to spend weekends with a new support bubble (M and his son). 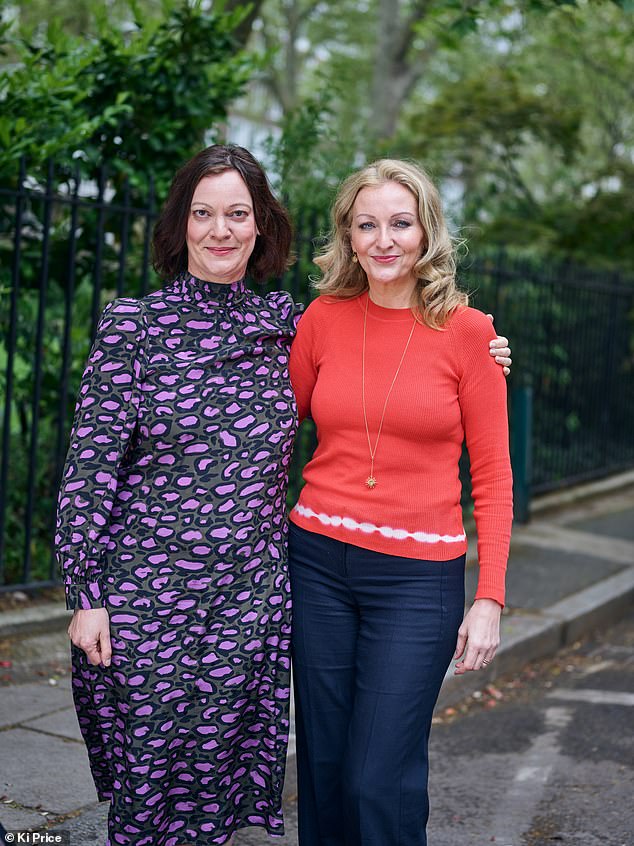 Liz said her first proper hug with Helen is the first step in her journey to have a life with connection. Pictured: Liz and Helen

Single households really did suffer most in lockdown; they felt like the demographic the Government forgot. So yes, I have a new relationship (and I apologise to Emily Maitlis, for deflecting her question about whom exactly I was looking forward to hugging most when it was allowed).

But lovely as romantic touch undoubtedly is, I miss my wonderful friends. I want to be able to lean in after an evening at Pizza Express, or express commiseration with a hug. I want to link arms with Helen in the street.

I want life. I want connection. So I know that means being brave and living with intelligent risk. My first proper hug with Helen is the first step on that journey.

And yes, I feel lighter, more grounded, after that embrace. Something has been mended.

In fact, social intimacy is the love affair of my life. My address book is more important than money or property or career highs. And I’ll never take it for granted again.