Spanish artist Santiago Sierra has attacked the “superficial and spectacular” treatment of his artwork Union Jack, saying a wave of reactions triggered its “public lynching”.

The artist, who planned to exhibit a British flag soaked in the blood of First Nations peoples at Hobart’s winter arts festival Dark Mofo, issued a statement early Thursday morning that accused Australian journalists of coverage that “stirred up the mood and built up the indignation to suit their own needs”.

Sierra said his quotes had been decontextualised and he had been “left without a voice, without the capacity to explain and defend” the piece. 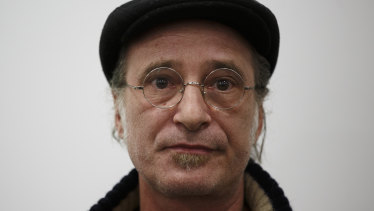 “We believe it is important to know the project with which we began to work [on] and which was accepted by the organisation before forming a judgement and issuing an opinion,” he said in the statement.

Indigenous artists and activists condemned the work but on Monday evening the festival defended it on the grounds of artistic expression. Less than 24 hours later creative director Leigh Carmichael apologised and said the artwork would not be exhibited.

David Walsh, the owner of Hobart’s Museum of Old and New Art of which Dark Mofo is a spinoff, also said he had made a mistake in approving the work and said “it’s no wonder everyone is disgusted”.

In his statement, Sierra acknowledged the use of Indigenous blood has been a particular point of contention given Aboriginal and Torres Strait Islander peoples “suffered most violently from British colonisation”.

“On this point, I have to say that, while this factor was important in the context we were working with, it was by no means the central element of the work given that, as we expressed in the project, British domination has historically extended across the five continents,” he said.

“In an ideal scenario 83 units would be collected, equivalent to just over 37 litres of blood, excluding those places that are uninhabited or inhabited only by [the] British military population.”

Sierra stressed that he did not expect to receive donations from every country or territory colonised by the British Empire, given he was also seeking as many as 20 donations from the Americas, 10 from Europe, 25 from Africa and 18 from Asia.

“In such a case, the country in question and the reason why it was impossible to obtain the sample would be mentioned,” he said.

He added that the blood-soaked flag was meant to encourage people to “reflect on the material on which states and empires are built” and show that “all blood is equally red and has the same consistency, regardless of the race or culture of the person supplying it”.

The artist also revealed he is working on a project that will submerge the national flag of Spain in blood donated from territories colonised by the Spanish Empire since 1785.

“This piece is part of a series of actions that will be carried out all over the world,” he said. “Similar actions can be carried out with reference to the British, Portuguese, French [and] American empires.”

The artwork and Dark Mofo’s response has divided opinion. Australian performance artist and Dark Mofo regular Mike Parr lashed the festival for its “cowardice and lack of leadership”.

The chair of Tasmania’s Aboriginal Land Council has also expressed disappointment that the artwork has been pulled. Others, including Terra Nullius author Claire Coleman, said using the blood of Aboriginal and Torres Strait Islander people would be “abusing, colonising and re-traumatising”.

A weekly read for book lovers from Jason Steger. Sign up now.