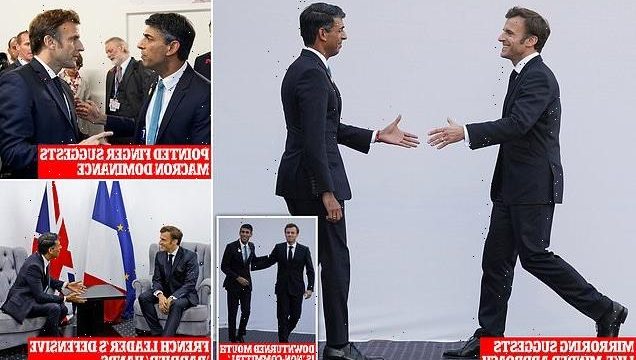 While it appeared to signal a fresh start in Anglo-Franco relations; a moment of warmth between two of Europe’s most youthful leaders, Rishi Sunak’s embrace with Emmanuel Macron at Cop 27 might not be quite as wholesome as it seems, suggests a leading body language expert.

The new British Prime Minister and his French counterpart embarked upon a back-slapping, grinning display of apparent entente cordiale after meeting in Sharm el-Sheikh on Monday – and Mr Sunak later suggested that the meeting had been productive, with an agreement on moves to try and tackle the immigration crisis in the Channel ‘imminent’.

The two premiers certainly have plenty in common – they’re both the eldest sons of doctors, and have both enjoyed a rise to power at an impressively young age – Macron is 44, while Sunak is 42 – but, says body language expert Judi James, their demeanors during their first public meeting as premiers suggest things weren’t quite as cosy as they looked. 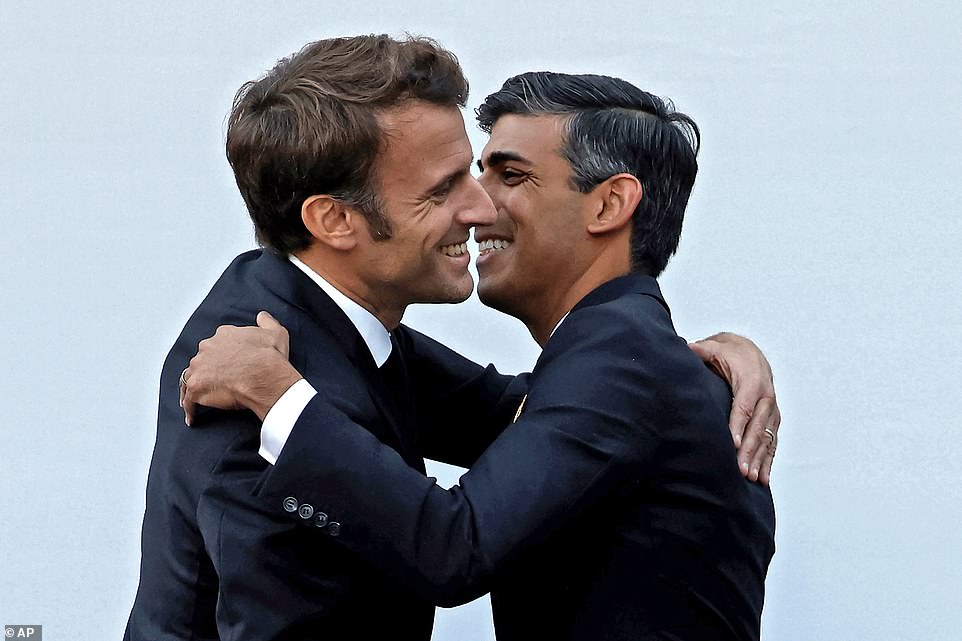 Europe’s latest bromance? Or grappling for power? Body language expert Judi James says the highly public first meeting between Rishi Sunak and Emmanuel Macron at Cop27 wasn’t quite as cosy as it appears 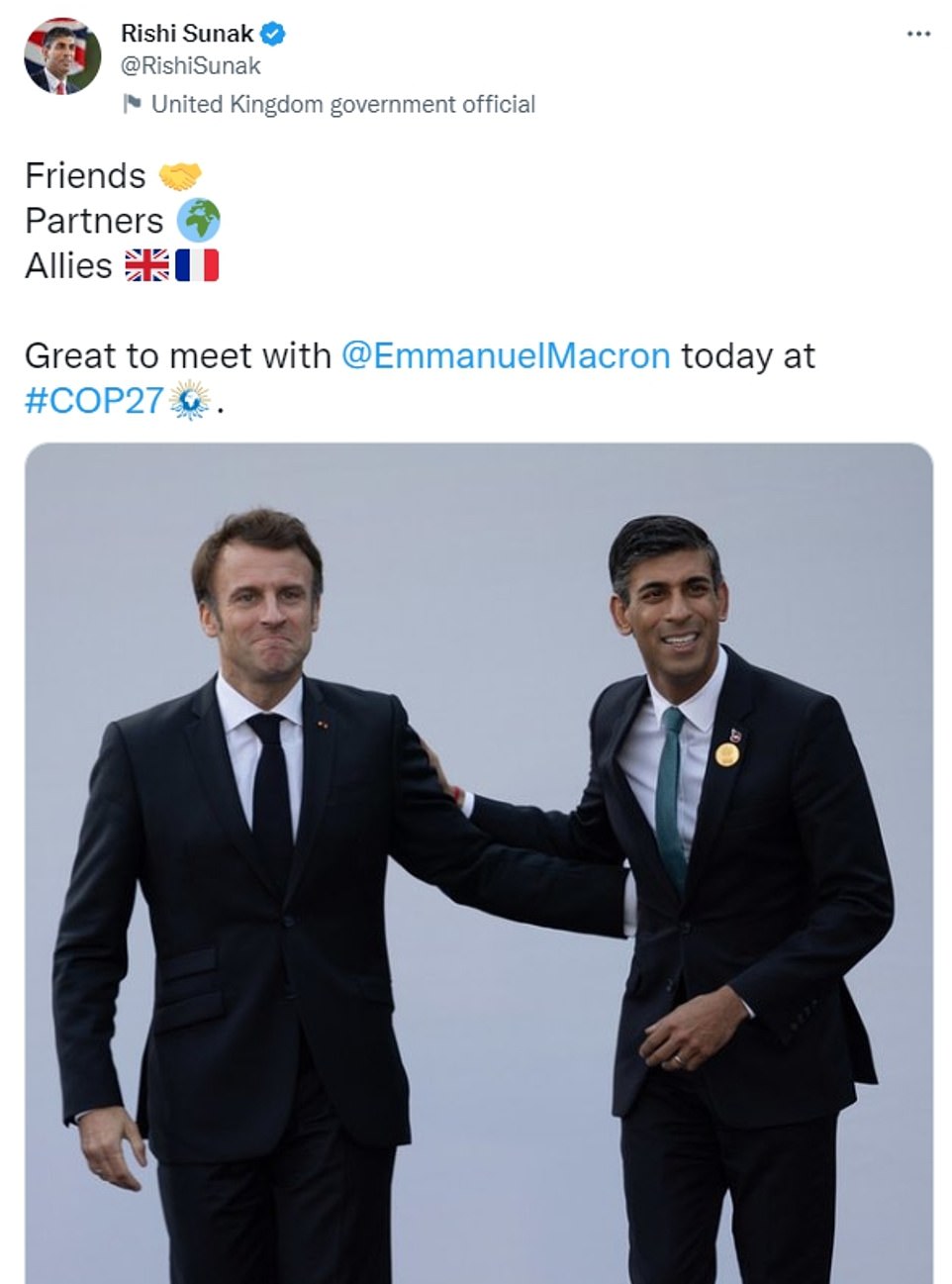 Following the meeting, Mr Sunak tweeted a photo of the two men, captioning it ‘Friends, partners, allies’…but James suggests their body language wasn’t quite on the same page.

The expert said: ‘On the surface, this meeting looks like quite the bromance, but before we start to label this as a new era of entente cordial we might need to take a closer look at their subtler signals to pick out the running sense of both caution and power-play from Macron in particular.’

Here, FEMAIL looks at telling moments from that first meeting that might belie those saccharine smiles… 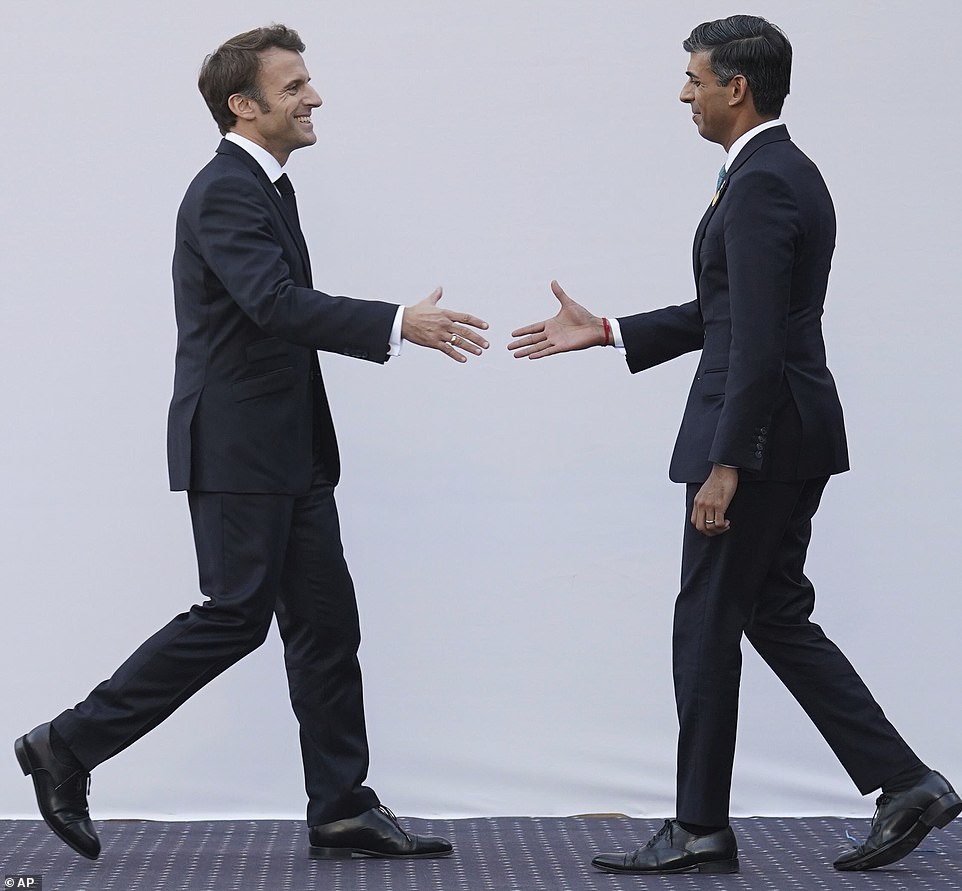 Et bonjour! Britain’s Prime Minister reaches to shake hands with Macron, ahead of their bilateral meeting in Sharm el-Sheikh on Monday, with their body movements appearing in sync, suggesting a mutual desire to put previous Anglo-French struggles behind them, says James

‘As an intentional gesture their handshake on stage looks positive. Both men are about the same height and the mirroring this creates as they move towards one another looks like friendly empathy and a like-minded approach.’

Judi continues: ‘Both men have a cocked or erect thumb as they stretch their hands out to each other, signaling liking and enthusiasm and both use eye contact.

‘Rishi’s mouth-shrug smile acknowledges all the problems that have occurred before between the two countries and appears to shrug them off for a fresh start.’ 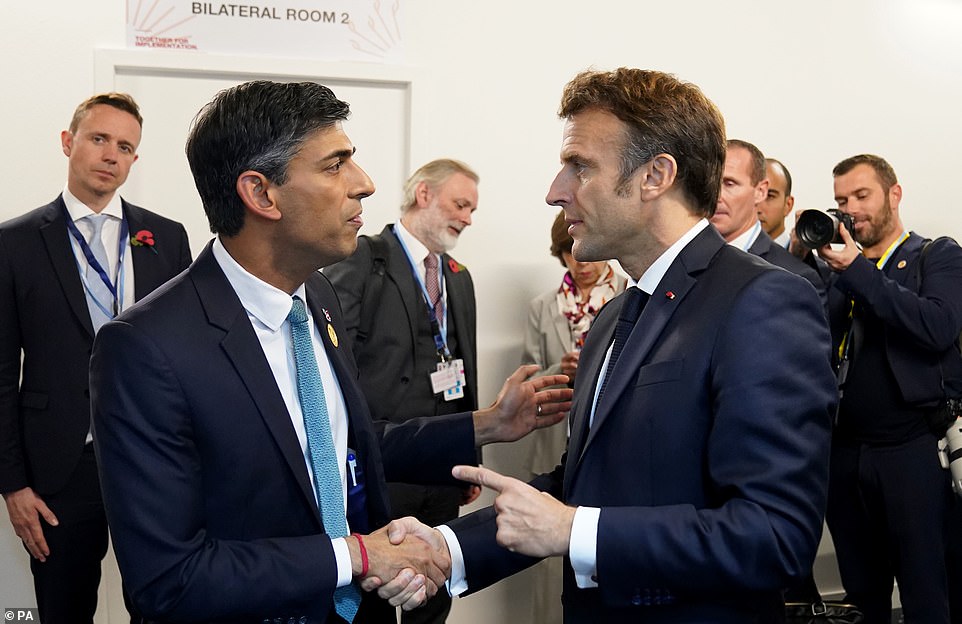 Learned from Donald? Macron deploys a firm handshake on Sunak…while also pointing a finger at him, suggesting he holds the power in this particular exchange

‘The hand clasp that we see later though is all about power-play from Macron. He learnt his greeting rituals from the likes of Trump and this is a power-shake in the style of the ex US president.

‘Macron has applied a hand clamp here to keep Rishi pinned and his other hand performs a pointing gesture with his index finger while his eye contact becomes more of a stare. This would make it appear that he is the one making points or arguments and laying down the law to Rishi, who stands almost helpless and passive in response.’ 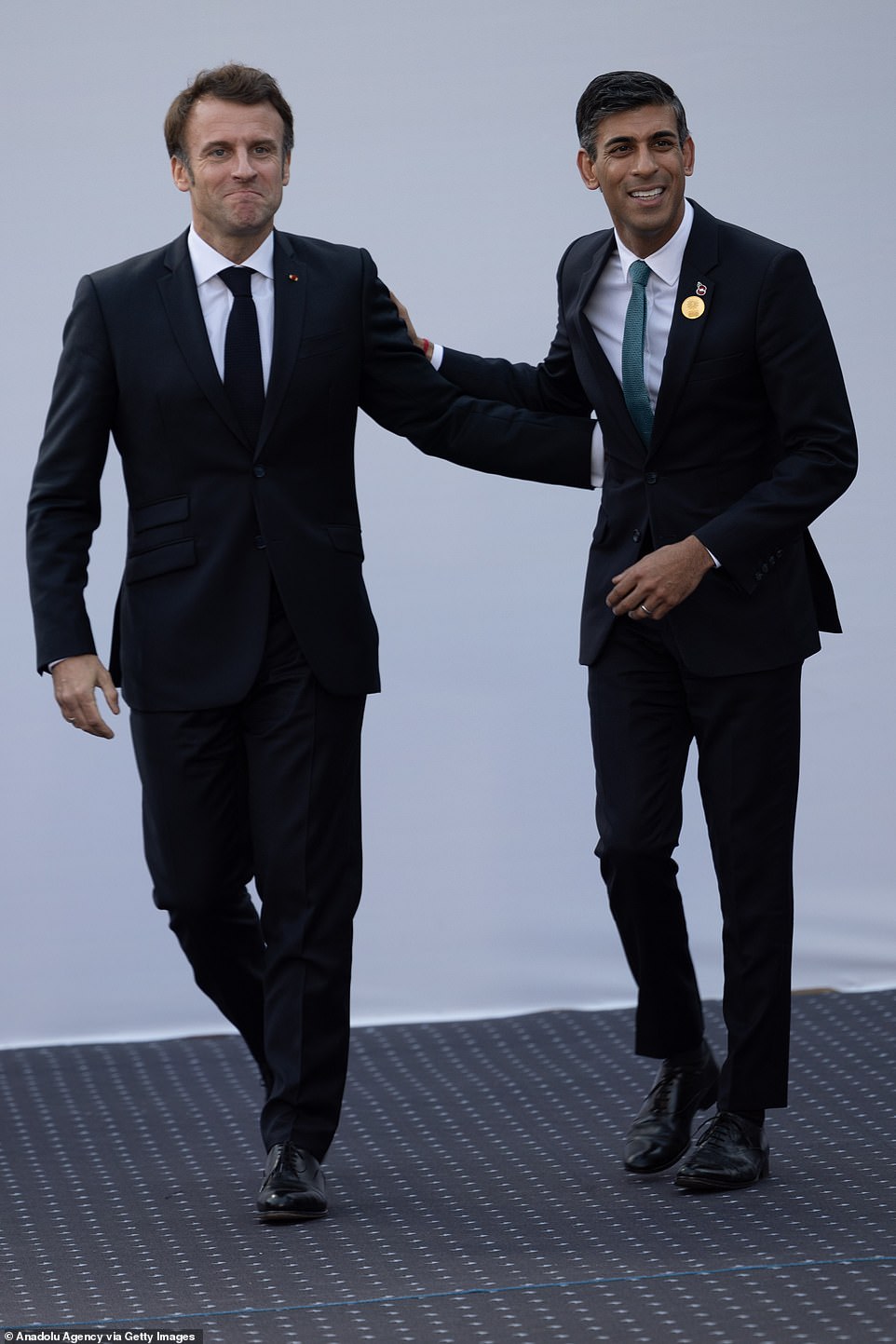 A smile that says ‘steady on’? Macron’s downturned mouth suggests he’s not quite as confident in future relations as his English counterpart

‘Even in their greeting hug we can see Rishi’s flattened hand clinging while Macron places a less tactile fingertips pointing downward clasp on Rishi’s shoulder.

‘Their mutual back-touching as they walk bonds them together in a warm-looking embrace but there is one pose where Macron performs a clamped, down-turned mouth smile that looks non-committal while Rishi looks like a happy, excited puppy.’ 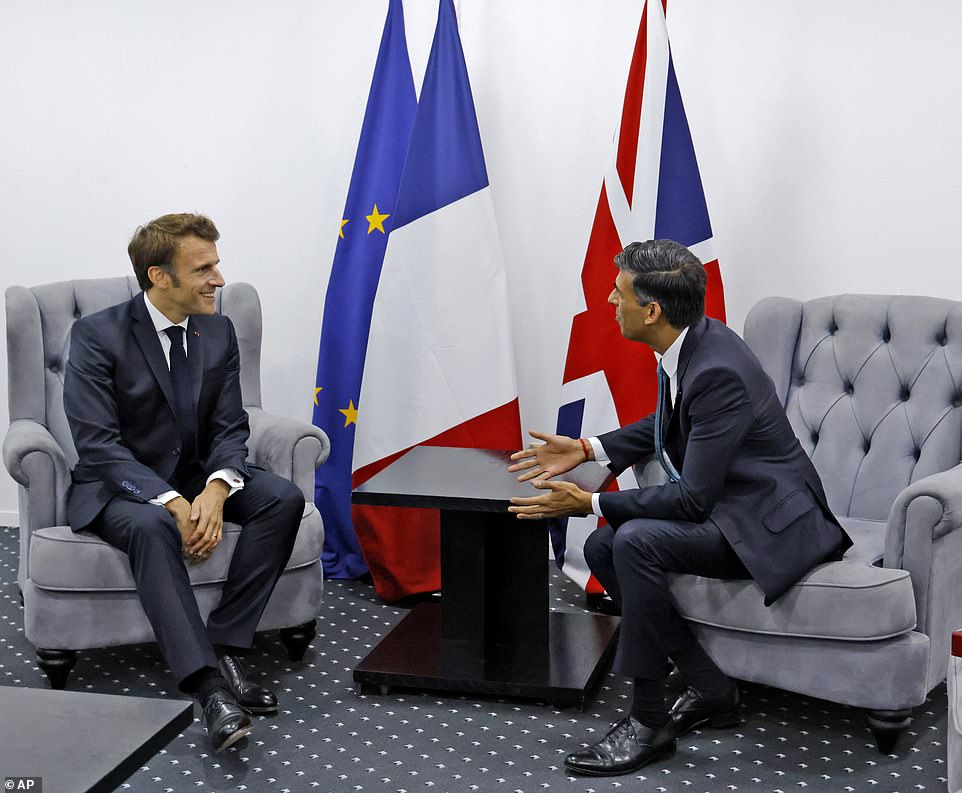 With the flags behind them, this exchange appears open and friendly, says James, but Rishi’s forward position suggests he’s more eager to please, with the French president holding his hands in a defensive position

‘When the two leaders sit together it is Rishi again looking submissive to a more dominant Macron. Rishi sits forward in his chair, leaning out towards Macron here and with his knees touched together.

‘He has both hands extended in what looks like a pleading gesture that makes it look as though he it trying to ask or persuade Macron. Meanwhile the French leader looks more guarded and more confident. His knees are splayed but he also clasps his hands in front of his crotch in a barrier ritual.’

British immigration officers will be deployed to tackle the Channel crisis in French territory for the first time as part of a landmark deal, the Daily Mail can reveal.

The deal will also see the largest-ever sum handed by the UK taxpayer to France – thought to be around £80million – for escalated anti-dinghy patrols.

Rishi Sunak indicated on Monday that an agreement was imminent after his first meeting with French president Emmanuel Macron. 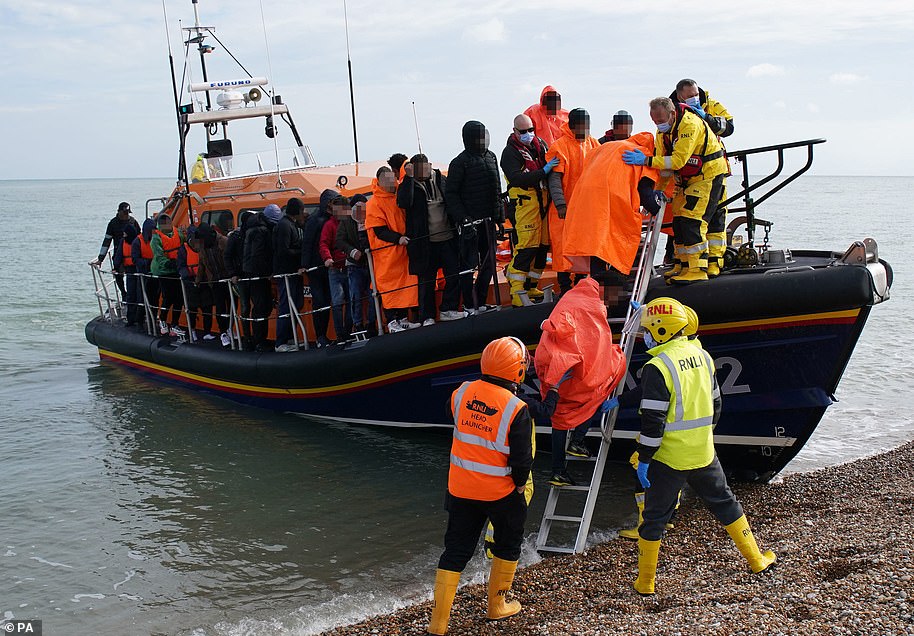 The Prime Minister said he had ‘renewed confidence and optimism’ that deals could be struck with Paris and other European partners to combat illegal immigration.

But critics warned that any new deal would have to deliver after years of broken promises.

Six weeks ago the Mail revealed that a previous attempt at an accord with France had been torpedoed by Liz Truss’s remarks about Mr Macron.

Boris Johnson’s government had been poised to announce a ‘ground-breaking’ agreement – but Miss Truss unintentionally scuppered the deal when she said the ‘jury is out’ on whether Mr Macron was a ‘friend or foe’.

Mr Macron’s government pulled out of the Channel negotiations a few days later, even though an agreement was on the cusp of being signed and sealed.

Last night negotiations were back on track as Downing Street confirmed talks were nearing a conclusion following a meeting between the two leaders at the Cop27 summit.

‘A deal is being discussed and I think is in its final stages,’ the Prime Minister’s official spokesman said.

After meeting Mr Macron in Egypt yesterday, Mr Sunak said: ‘There is an opportunity for us to work closely not just with the French but with other countries as well.

‘I’m actually leaving this with renewed confidence and optimism that [by] working together with our European partners, we can make a difference, grip this challenge of illegal migration and stop people coming illegally.’

The PM refused to put a timescale on when the Channel migrant crisis might ease, although he promised to take new action as soon as possible.

‘We all want this situation to resolve itself as quickly as possible,’ he said.

‘I also want to be honest with people it’s a complex issue. It’s not one simple solution that’s going to solve it overnight, I wouldn’t be honest if I said there was.

Officials are understood to be hammering out final details, with a formal announcement expected next week.