Senior union figure Misha Zelinsky has withdrawn from the race for the safe NSW federal Labor seat of Cunningham, clearing the way for political staffer Alison Byrnes to win the party’s nomination uncontested.

Mr Zelinsky, the national assistant secretary of the Australian Workers’ Union and a recent Fulbright scholar in Australian-United States Alliance Studies, said it had become clear in recent days he would not have enough support among branch members. 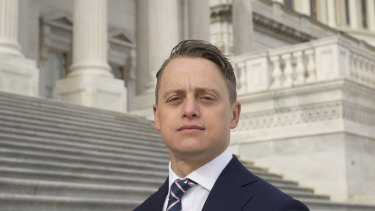 The contest for the seat, to be vacated by long-time MP Sharon Bird at the next election, had threatened to become a distraction for the federal opposition, with major unions backing Mr Zelinksy but several senior NSW Right factional leaders at loggerheads.

While widely viewed as a rising star of the ALP, Mr Zelinksy has continued to be plagued by scrutiny for his contributions to a 2012 satirical female advice book that was slammed as “degrading to women”.

“As I have had discussions with local Labor members, I have encountered encouraging support for which I am grateful. I appreciate the candour, friendliness and fruitful conversations,” Mr Zelinsky told The Sydney Morning Herald and The Age.

“However, it’s become clear that the majority of Labor members believe now is not the time for me to run for Federal Parliament. A ballot would be a needless distraction from the upcoming election fight.”

Ms Byrnes is a staffer to the retiring sitting member, Ms Bird. Her husband, Paul Scully, is the NSW state MP for Wollongong. Labor has held the seat on the coast between southern Sydney and Wollongong for all but two years since 1949, with Ms Bird holding the seat on a 13 per cent margin.

Mr Zelinksy, 37, said he wanted Labor to unite to elect an Albanese government and while he was withdrawing from a preselection ballot, he pledged to be handing out how-to-vote cards for Labor on election day and wished Ms Byrnes good luck.

He has apologised for the book but those supporting Ms Byrnes again raised questions about his judgement and attitudes towards women during the preselection process.

Senator Kristina Keneally last month told Sydney’s The Daily Telegraph the book, He’s an Arsehole Anyway – How to Deal with Being Dumped According to the Arseholes Themselves "hasn’t improved with age” or been negated by two apologies.

‘It’s become clear that the majority of Labor members believe now is not the time for me to run for Federal Parliament.’

A senior Labor figure said the party needed quality candidates such as Mr Zelinksy, an economist, lawyer and public policy expert, in the Parliament and “on the front bench” sooner rather than later. The figure said it would be a “matter of when, not if” he gained a seat.

Born in Wollongong, Mr Zelinsky said he resolved to run because he was alarmed by the rising cost of living and the increasingly insecure grip Australians had on their working lives.

“I love the Illawarra with a passion. This is the most beautiful place in the world. My family owes everything to the ’Gong,” he said.

Senator O’Neill said while she “unequivocally” condemned his comments in the book 10 years ago, he was entitled to redemption.

“Those comments, for which he has apologised, should be weighed up against a lifetime of service to the Australian labour movement,” she said. “His policy work is substantial and in the last 10 years he has achieved much, both personally and for others. He would undoubtedly make an immense contribution to a future Labor government.”