Labor looks set to avoid internal controversy over its energy policy, with key unions tempering calls for major changes on fossil fuels and coal and gas-fired power in its national policy platform to be debated on Wednesday.

But the platform lays the ground for a battle with the federal government over environmental laws, calling for new national standards, policed by an independent regulator, and enhanced protections for threatened species. 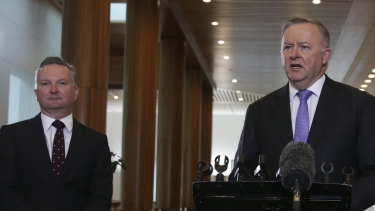 The Morrison government wants to hand control over environmental approvals for major projects to state governments and has rejected the creation of an independent regulator, preferring to keep the role within the Environment Department. The reforms are currently stalled in the Senate.

On the energy front, major unions and the influential left-wing Labor Environment Action Network will endorse the platform, which lacks definitive positions on hot-button energy issues including support for coal-fired power, the role of gas in the energy mix and measures to further boost renewable energy.

Labor has been divided over energy policy in recent years, culminating in prominent Left faction member Mark Butler being replaced as energy minister by the Right’s Chris Bowen in January. The powerful CFMMEU backs coal power and the Australian Workers’ Union has called for a better deal on gas for manufacturing, while Labor’s environment movement wants a rapid transition to clean energy and ambitious climate targets.

The party’s national policy platform says it will not rule out new gas extraction and power projects, in line with the Morrison government’s policy, and Mr Bowen said last month gas power would remain critical to support growth in renewable energy.

The AWU will propose an amendment that endorses gas projects and infrastructure in a general sense.

However, the Electrical Trades Union (ETU) will seek amendments that acknowledge the energy market operator has forecast a decreasing role for gas-fired power in the energy grid.

“It’s important that the ALP’s platform is based on fact and recognises the economic reality of what’s going on in Australia,” an ETU spokesman said. “Gas peaking stations are barely operating at 30 per cent capacity and their only way forward is with massive taxpayer subsidies. We need to make sure the platform recognises what’s really going on in the energy sector so we can support workers in new sustainable industries.”

The federal government has committed to reduce emissions by 26 per cent, based on 2005 levels, by 2030 and reach net zero sometime in the second half of this century.

Labor’s platform pledges to adopt the latest scientific advice on emissions reduction, which says to be consistent with international action required to limit global warming to below 2 degrees, Australia must reduce emissions 50 per cent by 2030 and hit net zero by 2045.

“Allowing an aluminium smelter or a steel mill to close in Australia does nothing for the planet because that production simply shifts elsewhere, like China,” AWU acting national secretary Misha Zelinsky said.