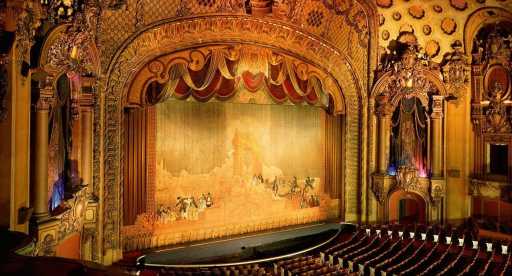 Downtown Los Angeles is a very different place than it was when the Los Angeles Conservancy kicked off its  “Last Remaining Seats” film screenings in movie palaces 35 years ago. When the annual series hits key theaters this month (after taking the last couple of Junes off for the pandemic), there will be far less trepidation in the air about the fate of some of the key theaters and the neighborhoods they’re in than there was back in 1987. One thing that’s very different, now versus then: the number of filmgoers who’ll be walking to the Orpheum and the Los Angeles, the two theaters that will host five of the six screenings.

Meanwhile, perhaps ironically, the LRS series kicks off Saturday with a field trip to a neighborhood that was seen as deeply thriving 35 years ago, but could use its own boost now: Westwood, where the venerable Village Theater will play host to the Conservancy for the first time.

Saturday night’s showing of “To Sir With Love” will take place at 8 p.m. at the Village on the west side. The following Saturday, June 11, a double feature of Charlie Chaplin’s silents “The Kid” and “The Immigrants” will take place as an organ-accompanied matinee at the Orpheum on Broadway, with “Blade Runner” showing there later in the evening. For the final Saturday showings, on June 18, it will be L.A’s arguably most magnificent theater, aptly named the Los Angeles (pictured above), hosting “The Women” as a matinee at 2 followed by Alfred Hitchcock’s “Notorious” to close out the series at 8.

The Orpheum and Los Angeles have been the two most reliable anchor theaters for Last Remaining Seats since 1987. “Downtown has changed significantly during that time” since the series began in 1987, says Linda Dishman, who took over as president-CEO of the Conservancy just a few years after that. .”We’re very happy that a lot of things have happened on the street: The Orpheum was restored and (re)opened in 2001, and we have the Theater at Ace Hotel (formerly United Artists) that opened in 2014. But there’s still more work to do.”

Continues Dishman, “Particularly at the L.A., just because of the way it’s positioned and designed, you can stand on the steps going up to the balcony and just watch people come into the lobby. And you can tell who’s been there before and you can tell who never has, because the people that have not ever been there, their jaw just drops, because they’ve never been in a theater like that before. Some of the people that have come to Last Seats for many years, you’ll see them up there, just enjoying watching the people that come in. These are places that a lot of people in L.A. don’t know exist, which is why we did the film series. Our goal each year is to bring more and more people into the theaters to understand we have this amazing historic resource, and hopefully with more people interested and engaged on the theaters, we will see more restoration take place and more types of entertainment offered on the street.”

Most of the action is on the south end of the boulevard, where the above theaters sit, along with the Palace, a smaller palace that has often played host to the Conservancy in the past. “And our goal now is to get the whole street revitalized,” like a north end that includes the Million Dollar (which currently hosts Secret Movie Club screenings) and a series of smaller theaters that have operated as clubs or swap meets and are now mostly shuttered. In the middle of the street, the State persists, too, albeit as a church, leaving it off-limits to screenings again.

Adaptive reuse has been a boon, as well. “When I first came 30 years ago, there were several studies done that said they didn’t think that 12 theaters could operate on Broadway, partly because they’re such large theaters. So that was something that we knew was a possibility, that some of the theaters might be used for other things like an Urban Outfitters or an Apple store. And to a large extent, having more options just adds to the vitality of the street. We saw the Apple Store open in the Tower Theater this year, which was really exciting because that was a smaller theater and it didn’t have the same interest” to concert promoters or others who could have maintained it as a theater, after it sat mostly dark for decades. “It needed a lot of work, and so it was really great that Apple came in and really did a spectacular job with the theater.” Next door is an Urban Outfitters that took over the long-gutted Rialto — but the spectacular neon marquee survives, contributing to the sense of Broadway as a thriving — and literally bright — historic district.

Meanwhile, why Westwood for opening night?

“We always try and have one night off of Broadway just to celebrate all of the historic theaters in Los Angeles. We’ve been to the San Gabriel Mission Playhouse. We’ve been to the Alex in Glendale and the Warner Grand in San Pedro. L.A. is rich with historic theaters. We did Westwood this year because in the fall we’re going to be doing a huge weekend of tours in Westwood, so we’re using this as sort of a kickoff for that activity.”

Besides a focus on Westwood’s two surviving movie theaters, the Village and the Bruin across the street, “we will be doing walking tours of the village and walking tours of UCLA,” promises Dishman. There will also be a look at the Tehrangeles tradition on Westwood Blvd. that has been a key part of the Persian history, and the Conservancy hopes to have a walking tour through a historic residential neighborhood as well.

Guests will be part of the series, with living cast members along to introduce or talk after a couple of them — including rocker Michael Des Barres, who played a youthful role in “To Sir With Love,” at the first screening, and M. Emmet Walsh at “Blade Runner” (which, of course, had the Bradbury Building down Broadway as a key location).

The older films have their own attractions. “Obviously we don’t have anybody coming from the silents, but we will have a spectacular organist play on the newly restored mighty Wurlitzer at the Orpheum. The organist is Clark Wilson, who has a national reputation, and I have seen him before and he’s great,” says Dishman. “And then we’re very excited about ‘The Women’ — we’re having a professor named Cari Beauchamp  talk about that time period. The film was written by a woman, and many people are surprised by that because in many ways it’s seen as not being very female-positive, but it tells you a lot about the life of women at that time period.”

The closing night film, “Notorious,” will have as guests film critic Leonard Maltin and Jennifer Grant, the daughter of leading man Cary Grant.

Tickets can be purchased in advance here.