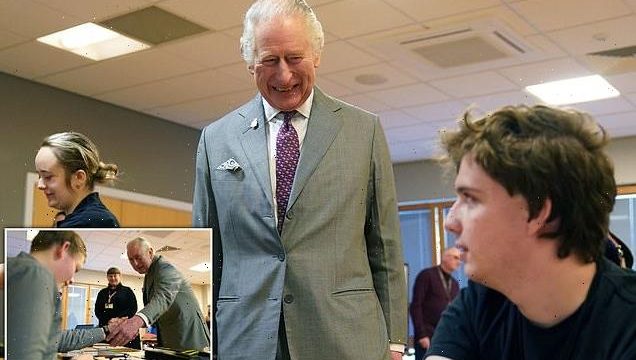 Business as usual! King Charles meets students at the Royal National College for the Blind as Prince Harry and Meghan Markle launch another attack on the Royal Family in new Netflix trailer

King Charles III was pictured in Hereford on Monday visiting the Royal National College for the Blind.

The monarch, 74, beamed as he met with students, staff and volunteers at the college (RNC), which equips students with the skills to live independently, and to prepare for university and the work place.

The King was pictured meeting students and hearing about how they are empowered to overcome professional and academic barriers with transformative braille technology.

It comes as Prince Harry today astonishingly accused the Palace of ‘lying to protect my brother’ and claimed he and Meghan were the victims of ‘institutional gaslighting’ in his most incendiary attacks on the Royal Family yet. 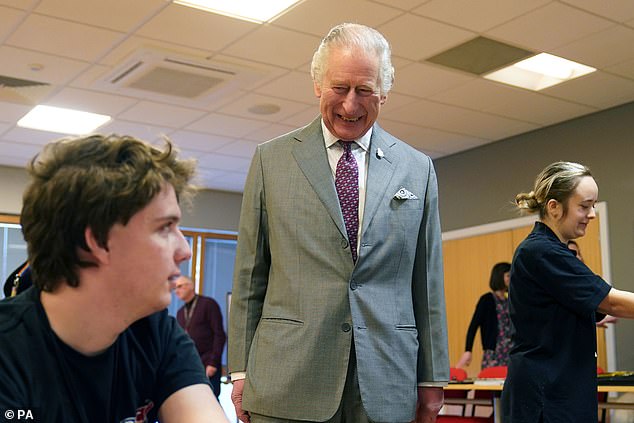 However, Prince Charles showed no sign of turmoil over the family drama as the visit got underway.

He also met an adorable guide dog called Bobby, who was sitting underneath a table with the students.

The Golden Labrador wasn’t wearing his harness during the King’s visit, meaning that Charles was able to engage with him. 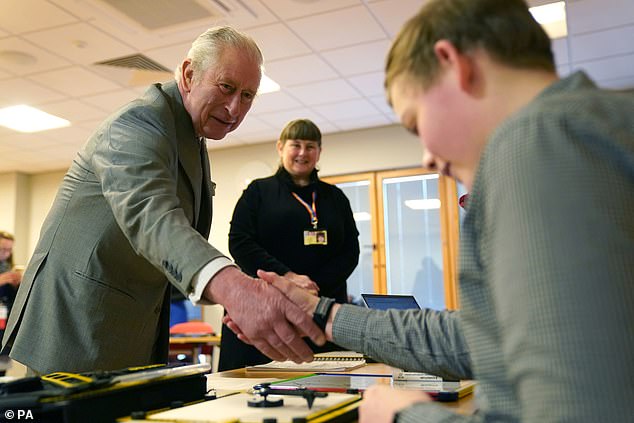 The King was at the college meeting students, staff and volunteers and learning about new braille technology 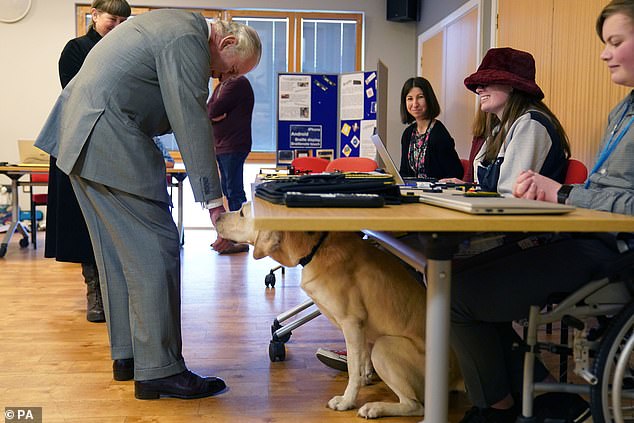 Charles was seen petting a guide dog called Bobby during his visit. The Golden Labrador was sat under a table with the students 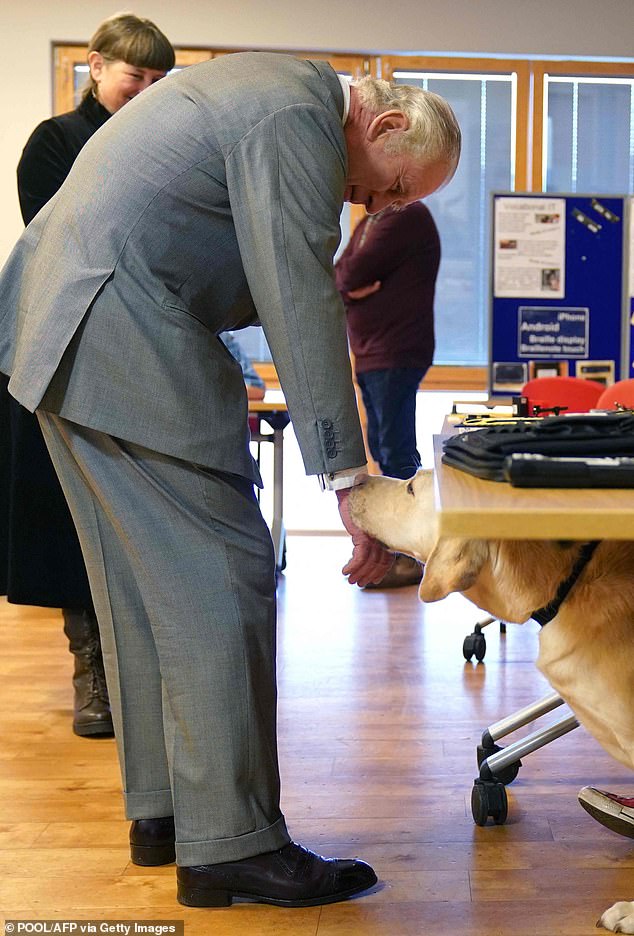 The king look enamored with the cute dog, who wasn’t wearing his harness, which meant he could be engaged with

He will met the players and coaches, and heard of their ambitions to play for the England Blind Football team, which competes around the world.

During his visit Charles unviled a plaque to mark the Royal National College of the Blind’s 150th anniversary on Monday. 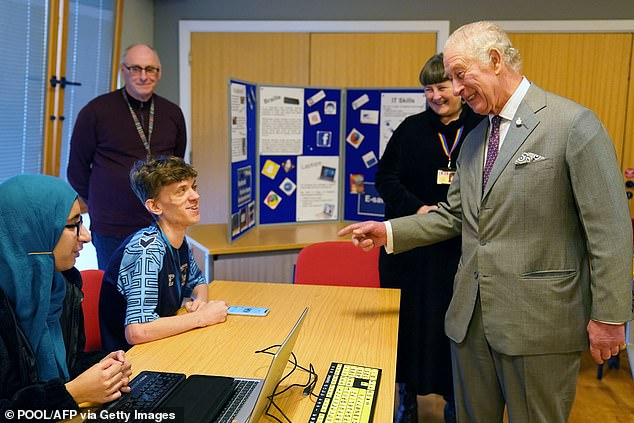 Charles beamed as he met students during his visit, who introduced him to new braille technology being used at the college 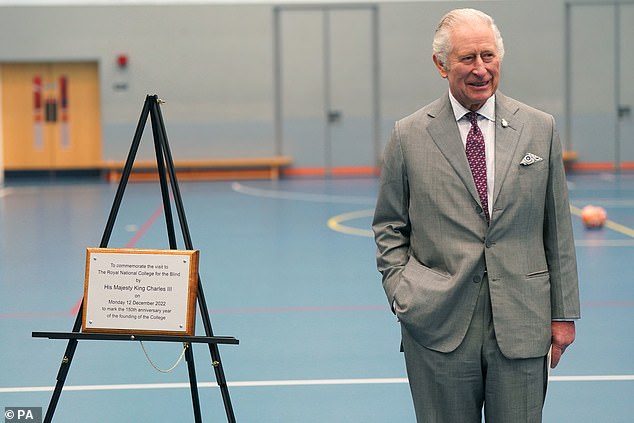 King Charles III unveiled a plaque during his visit to the Royal National College for the Blind, to mark its 150th anniversary 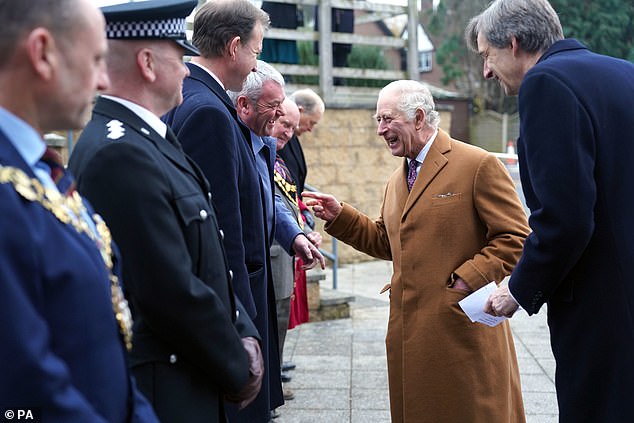 The visit comes after he released his first Christmas card as monarch, choosing a photograph taken of himself and the Queen Consort at a Highland Gathering just days before the Queen died.

On Sunday, the Palace released the image, taken by award-winning photographer Sam Hussein, selected for the historic seasonal card. 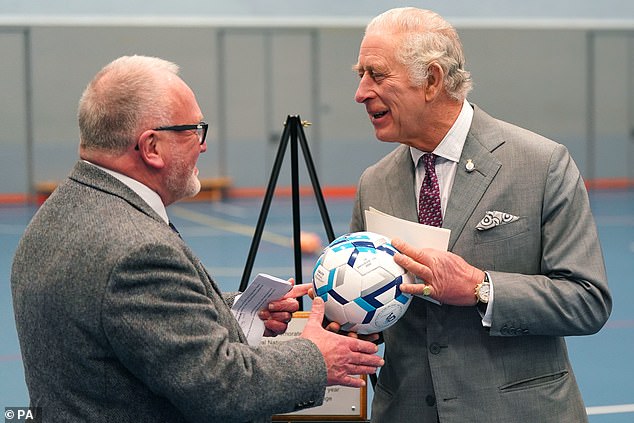 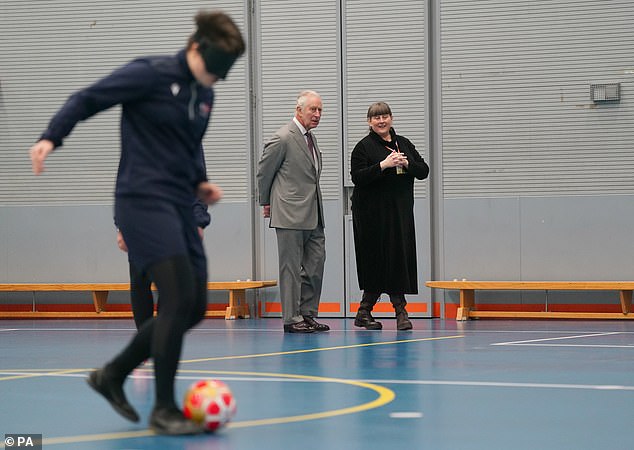 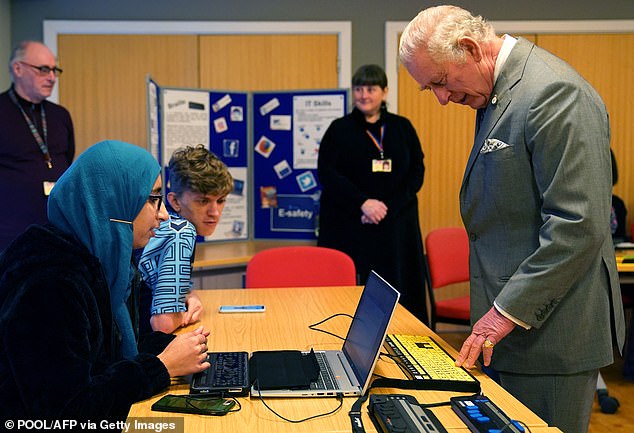 The King is pictured here observing the new technology being used by students at the college, which helps prepare students for university and the workplace 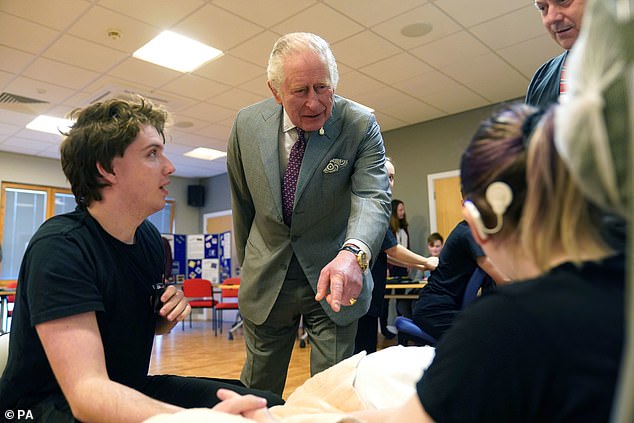 During his visit the King was seen engaging with the students. He was also there to commemorate the college’s 150th anniversary 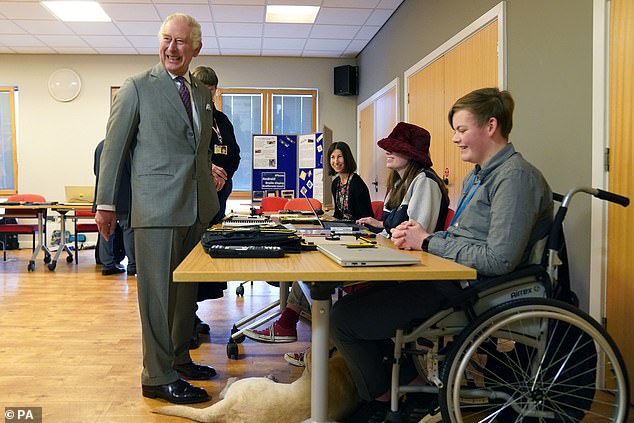 Bobby the guide dog was calm and patient during the monarch’s visit. He was happy to engage with the King

The photograph shows Charles, 74, and Camilla, 75, smiling at the Braemar Royal Highland Gathering on September 3rd, five days before the Queen died on September 8th.

It captures the King from a side profile, dressed in a tweed suit with a red, green and beige tie.

Meanwhile, Camilla is seen wearing a green suit and matching hat with a pheasant motif, and pearl earrings.