The “Half of My Hometown” singer, 29, unveiled the ink via Instagram during an “Ask Me Anything” Q&A with fans on Thursday, January 19. Ballerini shared a sexy bikini selfie that showed off a design on her side in response to a fan who asked if she got any new tattoos. “I got a little wave on my hip,” she wrote atop the snap. “I’ve been wanting it since 2016 and just randomly one day did it.”

She went on to share that the art is her “fourth little baby tat.” Ballerini added that she “kinda wants more” but “kinda don’t want my mom to kill me.” 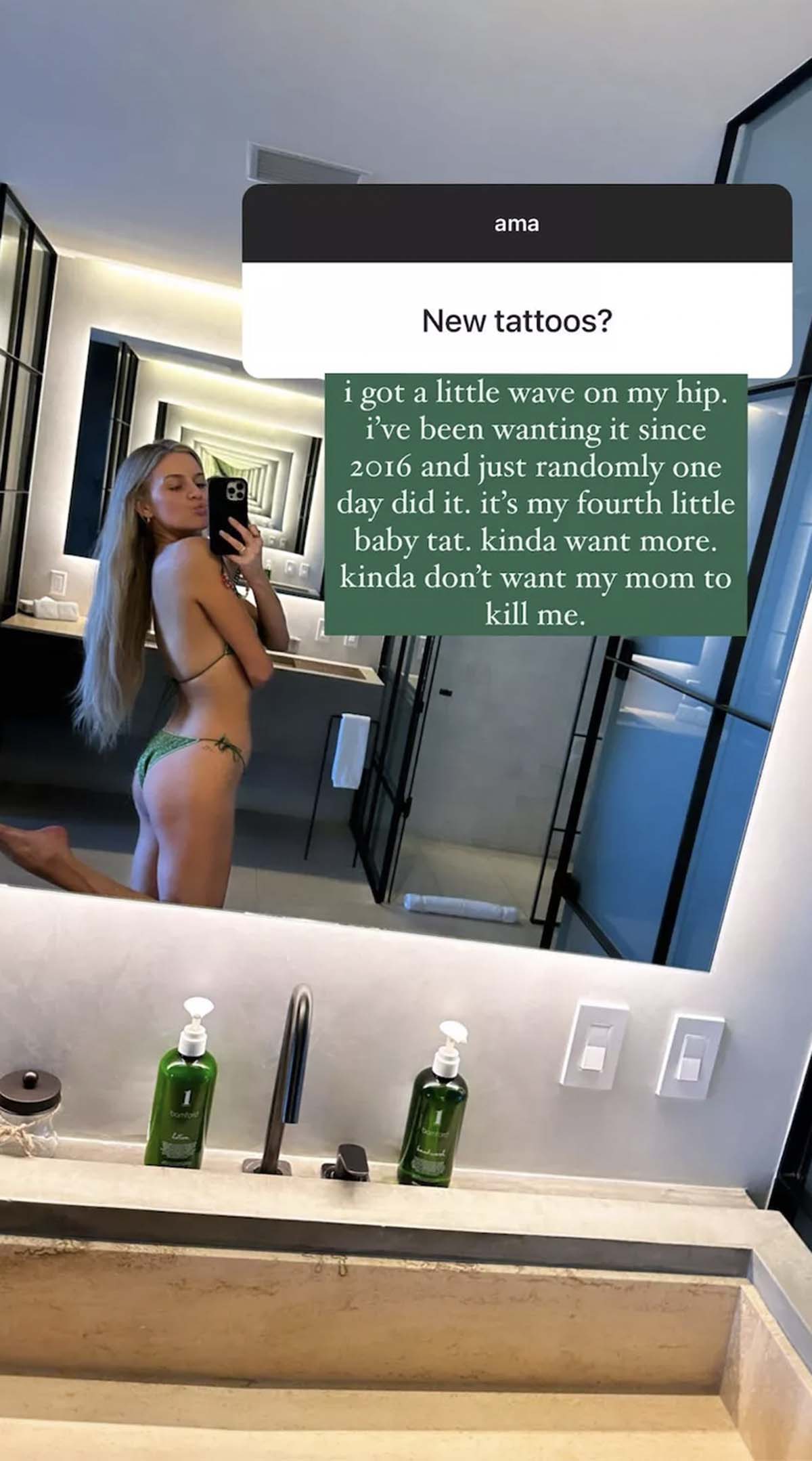 In the snap, the Tennessee native sported a cheeky green two-piece set and flashed a kissy face for the camera as her blonde tresses cascaded down her back. The new addition could be seen below the strap of her bottoms.

The Country artist previously opened up about her body art during a September 2022 appearance on the Late Late Show when host James Corden asked about her ink, prompting Ballerini to share the story behind her first tattoo experience.

See Celebs’ Wildest and Craziest Tattoos of All Time

The “Love is a Cowboy” singer told Corden, 44, that the idea came to her when she was preparing for her first-ever photo shoot in promotion of her single, “Love Me Like You Mean It.” At the time, Ballerini said she was having a “panic attack” about her career and the attention that may come with it. She worried that if she decided to get a tattoo, her fans would think she went “off the deep end.” Ballerini, however, followed her gut and got the tattoo.

Despite the design being “so much bigger” and not the font she wanted, Ballerini said she “wanted to be the same from the beginning.”

The delicate tattoo is written in cursive and reads, “How sweet the sound.” The “I Guess They Call It Fallin’” singer revealed in a 2018 interview with Audacy Radio that the lyrics are from “Amazing Grace” which was the first ever “solo” Ballerini sang in church.

Another one of the “What I Have” singer’s tattoos reads, “Love. Love,” in both her parents handwriting and the other is a square peg, symbolizing someone who feels like a misfit.

The “Subject to Change” singer looked ultra-glamorous in a black mini dress during her appearance on The Late Late Show. It had a stunning sweetheart neckline and cutout in the bodice. The skirt featured studded metallic circles and she added sparkly hoops to the ensemble. For glam, Ballerini looked chic in warm toned eyeshadows, mascara and peachy lips.