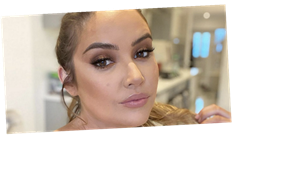 Want the most up-to-date celebrity exclusives sent straight to your inbox every day? Sign up now and join the club!

The former EastEnders actress, who recently opened up on her battle with trolling, has moved into a huge £1 million mansion with her husband Dan Osborne and their daughters Ella, six, and Mia, two.

Dan and Jac have taken the opportunity to start their own home Instagram account, to show their thousands of fans the renovation process.

While sharing a peek inside the impressive new abode, which is set to boast a cinema and lego room, Jacqueline showed off the huge kitchen.

She explained it needs some “tender-loving care” while revealing a problematic tap and a broken kitchen island.

The kitchen is huge, and it featured shiny grey cupboards spanning the space and state-of-the-art appliances, however Jacqueline has made the decision to completely rip it out and start again, leaving some fans on the fence.

“Kitchen is gone. Wish us luck,” Jacqueline penned, adding: “Didn’t plan for this much to be going on. Lots of little changes. I am so excited about this. Well worth it to have the kitchen we want.”

In the photo shared by the mum-of-two she reveals a completely empty space, with only the skeleton of the kitchen island remaining.

The post received just shy of 20,000 likes and saw some fans wishing Jacqueline luck, however others weren’t so impressed.

“Would of loved your old kitchen,” wrote one, followed by a crying face emoji, while another added: “Oh to have the money to pull out such a kitchen. I’ll take it.”

A third penned: “Hope the old one went to someone who would needed it,” and a fourth added: “Such a shame u wasted such a nice kitchen when u could have done a few alterations.” [sic]

Jumping to the defence of Jacqueline and Dan, one of their fans said: “Would people shut up about them removing a kitchen. They wanted a new kitchen, so what let them. They both obviously can afford it and why not!!! Can’t wait to see the new one!!”

Jacqueline and Dan’s kitchen refurb comes after Dan showed off the progress they were making on their cinema room.

In the snaps, the large room has a lot going on, with Harbour Automation putting in the building blocks to create the impressive new space.

The room looks set to have a huge screen in, and also in shot are cosy, leather chairs which look perfect for reclining in.

Dan also showed off state-of-the-art cinema equipment and wires everywhere, showing the showbiz couple are going all in with the room.

The walls and ceiling are painted dark too, so it’ll be the perfect, cosy environment to grab the popcorn and watch a movie in.