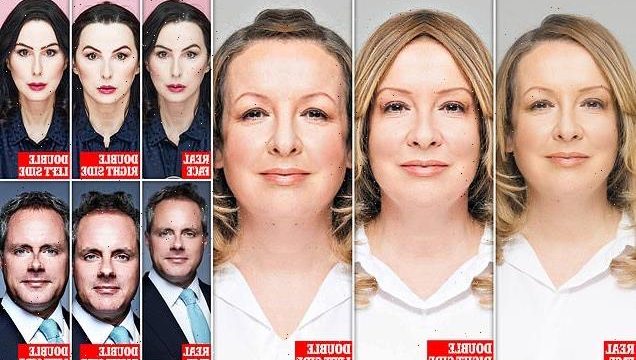 Is this the secret to finding out if YOU have a ‘best side’? With facial symmetry hailed for decades, new apps can now show the differences between our right and left

Most people — especially women — hate being photographed. ‘I take a bad picture’, or ‘I’m not photogenic’, we’ll tell the person pointing a camera at us. The older (and wrinklier) we get, the more torturous it becomes. At this time of year, with holidays, barbecues, picnics and weddings in full flow, it’s particularly hard to avoid being snapped.

We’ve all experienced that discomfort as we scroll through and scrutinise images on a phone and cringe at what we see. Oh no, look at that double chin! Delete. You could roll coins through those forehead creases! Delete. My teeth aren’t really that big, are they? Delete. Not only do I order friends to delete photos of me I don’t like, I then stand over them as I make them delete the ‘deleted items’ folder.

Why is it that everyone else always looks amazing while I resemble a balloon that somebody has drawn an angry face on? 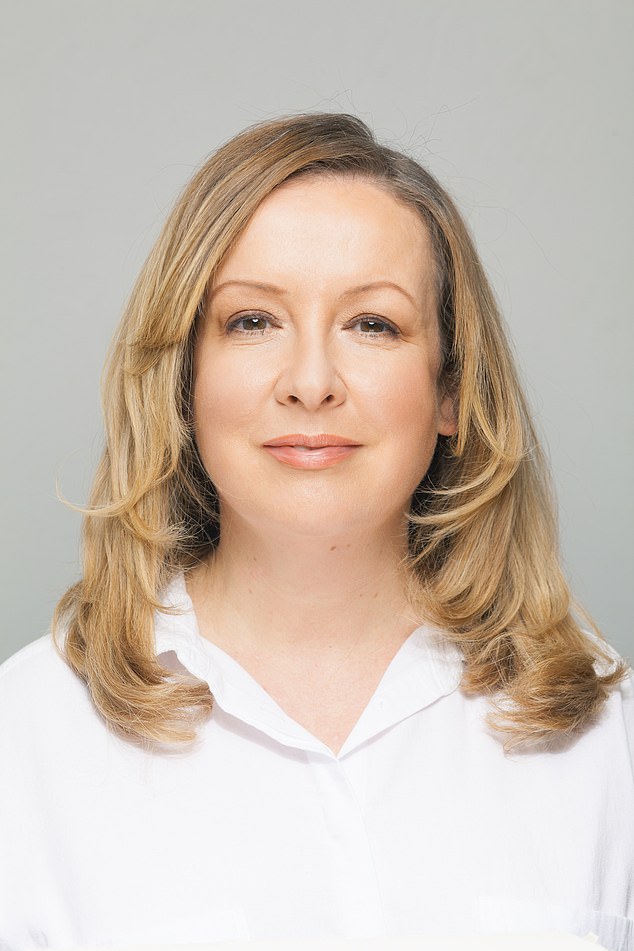 Claudia Connell (pictured) asks: ‘Why is it that everyone else always looks amazing while I resemble a balloon that somebody has drawn an angry face on?’

The reality is that we’re always our own worst critics when we see our image, picking ourselves apart and noticing the flaws that others don’t.

Well, finally I’ve found a photograph that I don’t want to instantly delete or rip up.

My rosebud lips look cute and pouty. My eyes are downturned, but I think that gives me a sexy smoulder. And will you look at that adorable button nose. If I say so myself, I look at least ten years younger than my 56 years.

I wouldn’t be surprised if, in the future, reality TV stars and influencers take my photo to their cosmetic surgeon and say: ‘Give me a nose like that.’ 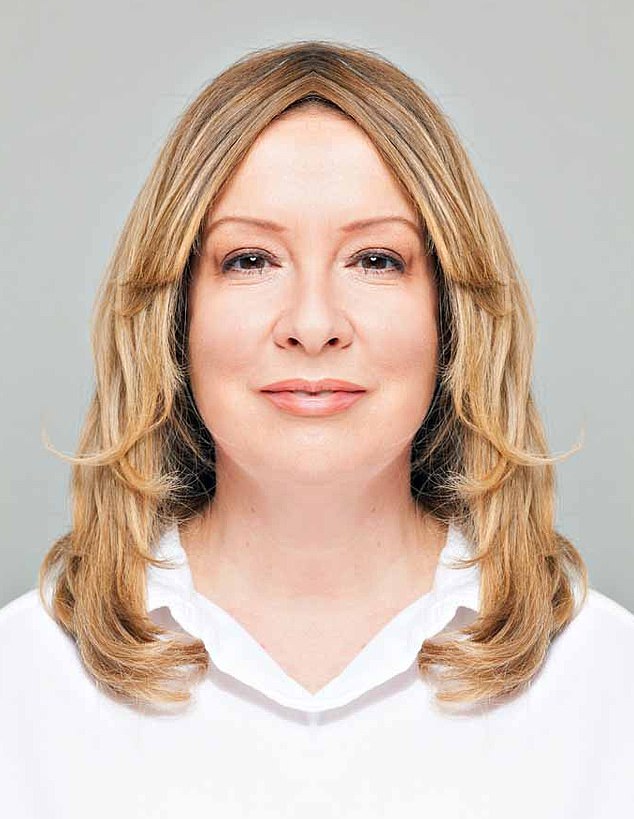 DOUBLE RIGHT SIDE: Claudia says ‘The reality is that we’re always our own worst critics when we see our image, picking ourselves apart and noticing the flaws that others don’t…’

What a shame, then, that the image is manipulated and I don’t look anything like it in real life. Instead it’s how my face would look if my ropey right side looked exactly like my lovely left. If the science is right, most of us do have a best side — and it’s the left.

Whether it’s calculated or coincidence, I do always turn my left side to the camera when I’m being pictured.

I’ve always had a round, moon face but, over the years, I’ve convinced myself that it’s less chubby on the left and that my nose looks sleeker and more sculpted on that side, too. Looks like I was right.

Scientists asked participants to rate the attractiveness of both sides of male and female faces on greyscale photographs.

To prevent bias, the researchers presented both original photographs and mirror-reversed images, so that an original right-cheek image appeared to be a left-cheek one and vice versa. 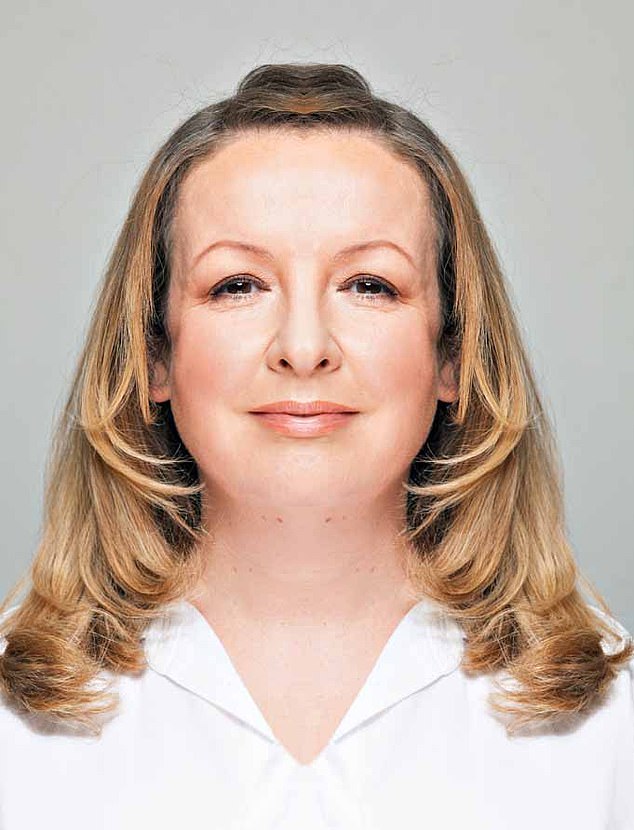 DOUBLE LEFT SIDE: ‘The left side of the face was rated as more aesthetically pleasing for both men and women,’ Claudia says

The left side of the face was rated as more aesthetically pleasing for both men and women.

But why the left? Researchers believe it could be down to the way emotions are processed by our brains. The right side of our brain is more involved with emotional expression and controls the muscles on the left side of our body.

It means the left side of our face tends to exhibit more outward emotion, which is found to be more aesthetically pleasing.

All I can say is, I had no idea I was so emotional.

Facial symmetry has long been regarded as the hallmark of a beautiful face — and while Mother Nature may have messed up on that score, at least there’s now an app that gets me a lot closer.

AMANDA PLATELL: ‘I STILL PREFER MY WONDERFULLY WONKY FACE, THANKS’ 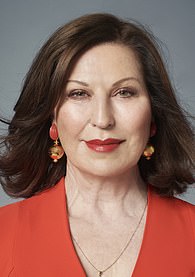 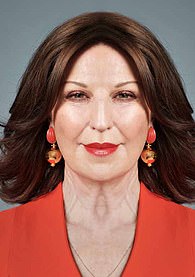 Amanda Platell says: Like most women who’ve spent a lifetime trying to look prettier than they really are, I’ve always known my face was lopsided…’

Like most women who’ve spent a lifetime trying to look prettier than they really are, I’ve always known my face was lopsided. Despite Mum reassuring me it’s our imperfections that make us special, I’ve tried to correct and conceal them with make-up.

You’d think, then, that I’d be pleased to see my face entirely symmetrical — particularly with the preferred left side replicated. But actually it fills me with horror.

Aptly so, as I resemble Anjelica Huston as the very scary Morticia in The Addams Family, with evil eyes made more menacing by that harshly pulled-back hair and equally arched brows.

You could slice salami on those cheekbones, and my perfect blood-red mouth looks like it’s about to eat a newborn baby. It’s just horrible and quite sinister. And when my right side is replicated it’s even worse. I look like Avatar heroine Neytiri, just not blue.

Fake, scary, a shiny perfection of benevolence enhanced by the middle parting of my hair, creating a terrifying symmetry.

My real picture shows me as I am — part saint, part sinner, part enthusiast, part cynic — and, like the rest of us, just wonderfully wonky.

HANNAH BETTS: ‘LEFT SIDE HANNAH IS A MINX — SHE’D GET ME IN TROUBLE’ 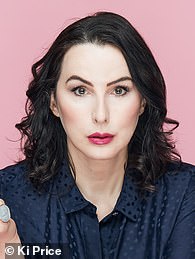 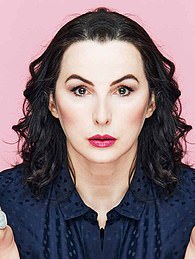 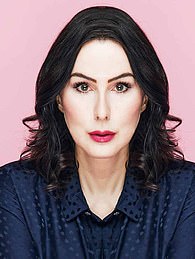 Hannah Betts says: ‘I’ve never found myself particularly attractive. But that was before I met left-hand face me. Left-hand Hannah is hot!’

I’ve never found myself particularly attractive. But that was before I met left-hand face me. Left-hand Hannah is hot!

Sultry, expressive, full-lipped with an oval face and fabulous cheekbones, she has a good nose and great hair. As for her right-handed sidekick — oh, dear.

Right-side Betts is balding with a gargantuan forehead, sticky-out ears, witchy snout, angry mouth, mad eyebrows and furious, beady eyes on either side of her vast, angular head.

Where left me is soft, sensual, seductive, right me is a ball of rage, as if she were about to punch the viewer in the face.

I sigh over left Hannah’s plush mouth and luxuriant expanse of hair. I envy her tender, soulful look. What havoc might this chimera have wreaked?

But, in the end, I still prefer real me. Left-side Betts is a minx. She’d get me into trouble. Better to be normal, contentedly average, bog-standard Betts. Irregularity is human, after all.

As for right Hannah, she’s my portrait in the attic: terrified and terrifying. I’m putting her back in her box. 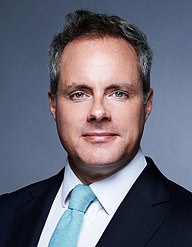 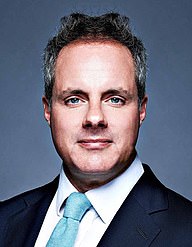 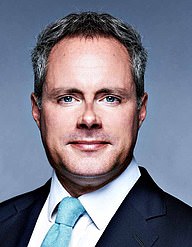 Henry Deedes says: ‘Having assumed us to be asymmetrical creatures, the results were surprising…’

Twig-limbed supermodels will always insist on snappers capturing them on their best side. But is there really such a thing as a ‘best side’ to my face? Surely it’s just a myth touted by vain and insecure fashionistas.

As with everything these days, there is now an app in which I was able to see for myself. Having assumed us to be asymmetrical creatures, the results were surprising. First impressions of the right hand side of my face are that it seems oddly lifeless. It is undoubtedly still me. But strangely zapped of any substance or personality. A tonic water without a generous slug of gin.

The left side is a different story. He seems more masculine. Meatier, fuller. More at ease with himself.

This character seems to exhibit more warmth than my colder right side. Is this chap not kindlier? Is he not friendlier?

Admit it, if you had to approach these two different faces in the street for directions, you’d be more inclined to ask my left-sided self. Mr Right Side would raise his snout snootily in the air and breezily walk on past you with a dismissive shake of the head.

I suppose it’s interesting to see your less flattering features highlighted in this way. Also a little unhealthy.

Like most people I usually hate most photos of myself.

Even this very photo — which was taken a dozen different times by a brilliant professional photographer — makes me cringe with embarrassment.

Perhaps I should get her to try it again. And if I can just turn a little to the side…

RADHIKA SANGHANI: ‘I SPENT MY TEENS TAKING SELFIES, SO I HAVE ALWAYS KNOWN LEFT IS BEST’ 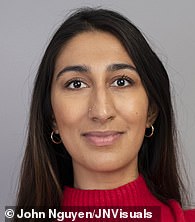 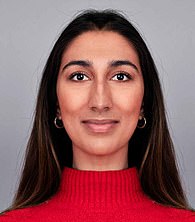 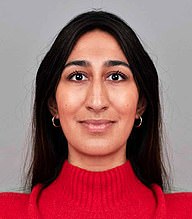 Radhika Sanghani says: ‘It doesn’t help that two symmetrical beauty spots look bizarre or that my hair is far too close to my face with a large kink — from now on I’ll be adopting a middle parting…’

I am not surprised researchers have found the left side of our face is the best — but what else would you expect from a 32-year-old millennial who spent her teens taking selfies?

I’ve always stood to the left in photos, so my left side was on show. It’s partly because I have a small beauty spot on my cheek, which I liked to think gave me a Hollywood edge, but also because that side looked slimmer.

Only now, I’m starting to regret that. Because I cannot stand the double-left image of my face. How have I never noticed my left eye is so closely set towards my nose? Or that my left eyebrow is so low?

It doesn’t help that two symmetrical beauty spots look bizarre or that my hair is far too close to my face with a large kink — from now on I’ll be adopting a middle parting.

But it’s also the shape of my face: I thought a thinner face would be more attractive but actually it’s just ageing.

In contrast, my right side is proving better than I thought. The distance between my eyes and nose makes my face seem more open, while my higher eyebrow arch makes me look younger.

Unfortunately, my face is so symmetrical that it appears unnatural, while my lips are almost rectangular. For this to be my best side, I’d need the softer lips of my left. It’s why my original face is, luckily, the one I prefer. I think my asymmetrical imperfections are what make me beautiful.

My teenage self didn’t agree, and I still don’t always love photos of myself (who does?), but I’ve learnt to see the beauty in the face I have, rather than the ‘perfect’ one I dreamt of.

From now on, I’ll be moving to the right as soon as someone puts a camera in front of me. And my hair will be parted right down the middle.