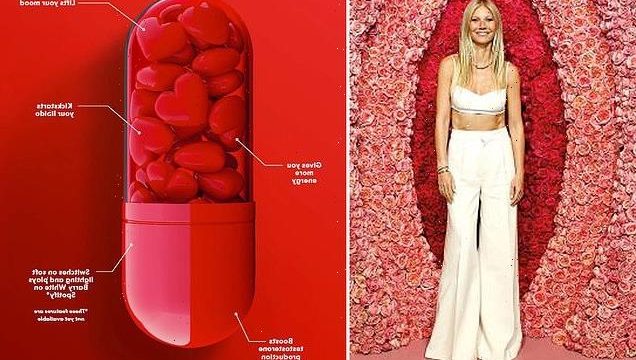 Is this the love drug we’ve been waiting for? Our sex drives have plummeted during the pandemic, say scientists, prompting a boom in supplements

Has your sex life gone off the boil? Do you feel that things could be slightly ‘off’ with your partner? The answer might be as simple as just popping a pill – and that reality is growing closer.

This month, Oxford University anthropologist Dr Anna Machin predicted that love drugs are ‘on the horizon’ – and that she expects to see such drugs used for couples therapy within five years. It has already been shown that harder drugs can smooth over problems in shaken-up marriages; a recent paper found that taking MDMA could help someone feel closer to their partner by helping to release serotonin, which promotes empathy (though we’re not suggesting you rush off to do class-A drugs).

This is just the start, Dr Machin explains, given that the pharmacology of attraction is now on the ‘frontiers of love research’. There are a number of chemicals that are of interest, including oxytocin, which researchers believe helps in approaching potential partners. Within a decade, Dr Machin says, she would expect to see ‘people squirt oxytocin up their nose before they go out on a Saturday night, at the same time as having a glass of prosecco’.

For those further along in their relationships, the focus is on different chemicals, including dopamine and beta endorphin, the latter of which is effectively an opioid produced by your body, says Dr Machin. ‘It is powerful enough to underpin your relationships in the long term because, just like heroin, it is addictive. That’s the reason why when you get dumped it feels awful – because you’re going into opiate withdrawal.’ 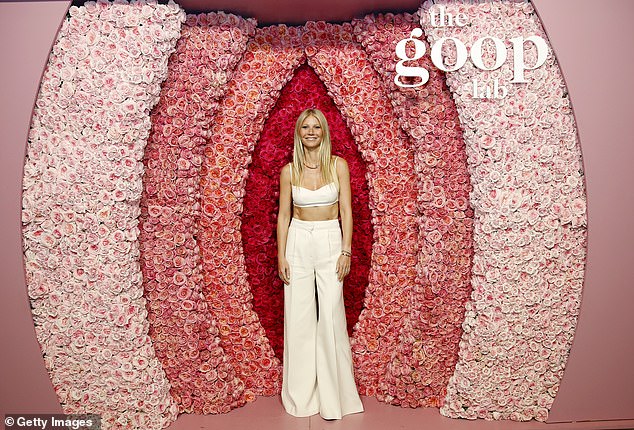 Whatever their eventual formulation, these love potions could be a welcome addition to an already booming market of products designed to perk up our relationships. In October 2021, Gwyneth Paltrow launched DTF, a supplement her £200 million wellness company Goop claims ‘supports women’s sexual desire, arousal and mood’.

It’s one of a host of supplements that have appeared during and after the pandemic claiming to boost female sex drive – a drive that some scientists say has crashed into a ditch after two years of lockdowns, working from home and often unwelcome proximity to their partners, children and the endless box-set boredom of Covid life.

According to a paper published in the science journal BMC Public Health earlier this year, Covid restrictions led both to higher rates of sexual dysfunction and reduced sexual activity. The report outlined problems in both sexes, but higher rates of dysfunction among women, concluding: ‘Sexologists should design and implement effective programmes to reduce the causes affecting sexual functioning, given the psychological strain the pandemic put on individuals.’

It was a trend that the supplements industry had already spotted, and it has led to a proliferation of products claiming to restore libido. But do they work?

Most libido supplements contain ingredients with proven track records, such as saffron for regulating moods, vitamins C, B2 and B6 and magnesium for hormonal balance and energy, and add-ons such as shatavari, which nutritionists say can relieve stress, and ginkgo, which can promote production of testosterone (the primary male sex hormone needed in women for sex drive). Some also contain the plant extract tribulus, which some cultures regard as an aphrodisiac, and maca, a relative of the brassica family from the Peruvian Andes, which researchers say may have a positive effect on libido.

The biggest claims, however, are being made for products containing fenugreek – one of the ingredients in DTF. This is because of a scientific paper published in the journal Phytotherapy Research in 2015, which concluded that the herb is ‘a useful treatment for increasing sexual arousal and desire’.

But supplements like these are unlikely to solve the problem on their own. Bean Bindloss, founder of thenutritionalbean.com and a member of the Complementary and Natural Healthcare Council, says: ‘Some, such as fenugreek in Goop’s DTF, are proven to increase production of testosterone, but there are many factors which cause decreased libido that popping a supplement won’t solve. Being trapped in the family environment, looking after children, constantly cooking, working or worrying can leave a person feeling depleted and harassed, and that’s likely to suppress the libido. 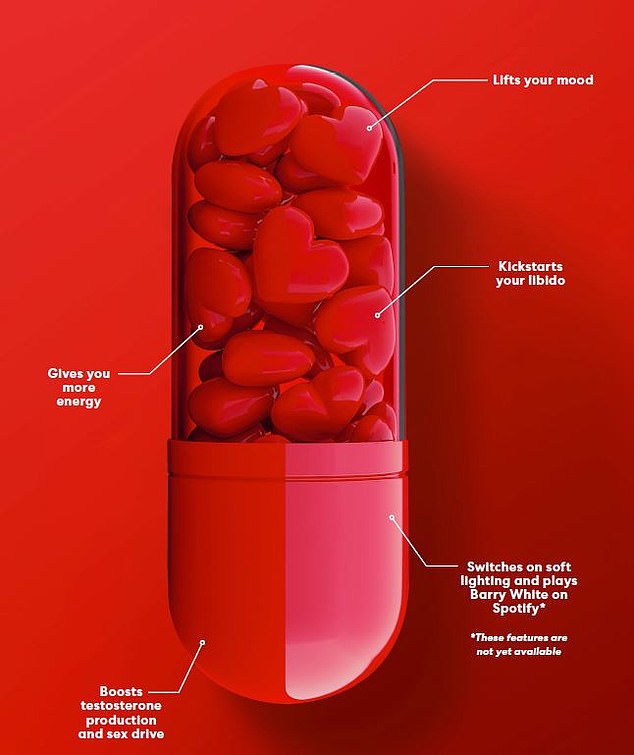 Most libido supplements contain ingredients with proven track records, such as saffron for regulating moods, vitamins C, B2 and B6 and magnesium for hormonal balance and energy, and add-ons such as shatavari, which nutritionists say can relieve stress, and ginkgo, which can promote production of testosterone

‘Diet is important, too: eating processed foods, not consuming enough fibre, healthy fats and colourful vegetables, may leave you feeling bloated. And if you’re swollen or have indigestion or diarrhoea, you’re hardly likely to feel in the mood for sex.

‘Lack of sleep on its own may reduce testosterone levels enough to affect sex drive. But the stresses of modern life can have the biggest impact of all. If you’re struggling with a deadline, or you’re late for a meeting, then your body produces the hormone cortisol, which is its natural response to stress.’

Cortisol is released by the body to trigger the ‘fight or flight’ mechanism. Originally, this might have been to avoid an enemy – and when it happens, any desire to have sex is abandoned in favour of survival.

Bindloss says: ‘Functions that enhance survival are switched on by cortisol, such as alertness, increased blood sugar, breathing and heart rate, while those that aren’t relevant are switched off ‒ mainly digestion and reproductive functions, which includes your sex drive.’

Daniel O’Shaughnessy, a former director of communications for the British Association for Nutrition and Lifestyle Medicine, and founder of thenakednutritionist.co.uk, agrees that stress is probably the biggest dampener on libido. ‘In more than ten years of clinical nutritional experience, when women come to me complaining of loss of libido, nine times out of ten it’s stress-related,’ he says.

‘I’ve noticed a lot of supplements coming to the market and they tend to identify some factors born out of research and use them to grab headlines. So, yes, a bit of fenugreek might do you some good, but you have to ask what was the cause of loss of libido in the first place?

‘Getting to the root causes of a problem is the best way to find out what is going wrong. If you’re suffering from chronic stress, there isn’t much that a bit of fenugreek is going to do for you. Your problems could be to do with diet, lifestyle, or you might simply be bored or unhappy in your relationship. It could be a lot of things that won’t be fixed by a few supplements.’

So, if popping a pill won’t solve the problem, what will?

‘The first step is to check in on yourself to see if you are under any excess stress, if your sleep is impaired, or anything has recently changed,’ says O’Shaughnessy. ‘You can do tests to look at the stress hormone cortisol and sex hormones to see if there is an issue there, then address it with your GP, a nutrition practitioner or an endocrinologist.’

Bindloss adds: ‘Let go of the things over which you have no control and focus on what you can. Try to stop worrying about things in the future that might not happen. In the wild, animals will shake after a stressful experience and in humans, too, movement is important ‒ running, even walking are good. Weight-bearing exercise, such as lifting dumbbells, helps to produce increased levels of testosterone which can improve sex drive.

‘So there’s nothing wrong with taking a supplement to help, but that alone would be drowned out by all the other factors that suppress libido ‒ you really have to deal with those, too.

How much bang for your buck?

This contains the fungus cordyceps, which does have a traditional use in Chinese medicine for boosting sexual function. But I’m not sure it justifies the price and lack of transparency about ingredients. 3/10

While the inclusion of tribulus and gingko support production of testosterone (and gingko may also enhance blood flow), I doubt the dose of either will be enough to have much of an effect. 5/10

The nutrients here support energy and reduce stress. Maca and muira puama are known aphrodisiacs. This supplement may be effective, but other variables, such as poor sleep, could override its influence. 5/10

This includes gingko to promote testosterone production and L-arginine for blood flow. The other ingredients don’t address libido directly, but may help to set the scene well. 7/10

Fenugreek has been shown to increase libido; shatavari, used in Ayurvedic traditional medicine, helps the body adapt to stress; and saffron is a great mood support. I like this combination. 8/10

Magnesium and vitamins C, B2 and B6 are important for hormonal balance, while testosterone boosters tribulus and maca are here in amounts that are likely to be effective. 9/10