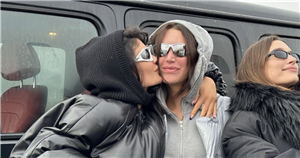 Kylie Jenner enjoyed a luxury winter getaway with sister Kendall and daughter Stormi, where she travelled along with some friends to Aspen, Colorado, to ring in the new year.

The 25-year-old reality star shared pictures to Instagram of the holiday, including a snap of her sitting in the seat of a Mercedes G-wagon SUV, looking snug in a white fur coat.

She also shared a sweet snap of Stormi, four, peering through a car window at the deer out in the snow, as well as a mummy-daughter pic of the two of them stood in front of a huge Christmas tree.

Kylie also posed with best friend Stassie Karanikolou in front of a snow plow, in matching low-cut black dresses. Hailey Bieber was also on the trip, with Kylie sharing a picture of the pair outside a black SUV, dressed in leggings and oversized coats. Kylie captioned the selection of pics “2023”.

The cosmetics mogul has shared plenty of adorable snaps of daughter Stormi over the festive period, with the pair twinning in matching Mugler gowns for the annualKardashian Christmas Eve party .

Kylie opted for a more grown-up version with a plunging neckline, spaghetti straps and thigh-slit, finishing the look with sleek Hollywood waves.

Meanwhile Stormi’s gown looked like something out of a Disney movie, with a black lace top and ballgown style gold skirt.

As well as Stormi, the star shares son Wolf Webster, ten months, with her partner Travis Scott. After his birth in February she announced that his name was no longer Wolf, writing on her Instagram story at the time: “FYI our son’s name isn’t Wolf anymore.

"We just really didn’t feel like it was him. Just wanted to share because I keep seeing Wolf everywhere.”

However during the finale episode of Hulu's The Kardashians, Kylie revealed that she had done a u-turn and decided herson's name was still Wolf.

She told the camera: "This year has been very transformative for me. There's so many amazing things that I'm really excited about. To hang out with my babies and really dive into my work."

She then added: "My baby's name is still Wolf. I'll let you guys know when I change it. Maybe I'll tell you guys in season three."

In an earlier episode, Kylie revealed how the pair had struggled to settle on a name for the son. She said: "[Travis] will come back and be like, ‘I really like this name’, and for the day he’ll call him that. I’m like, we can’t do this again. I’m waiting for him to just name himself.”

Kylie and Travis have gone to great lengths to protect their son's privacy, hiding his face whenposting photos of himdespite showing pics of their daughter Stormi.