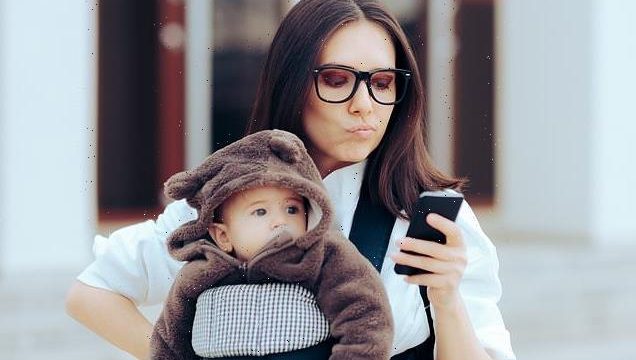 A new mother has hit out at people repeatedly commenting on the ‘unique’ name she’s given to her baby son.

Earlier this week, the anonymous mother, from the US, took to Reddit to explain how she didn’t think the name was groundbreaking when she settled on it – but is now begging others to use it too.

Posting on the forum Name Nerds, she explained: ‘We named our baby boy Soren and a lot of people where I live have never heard it before.

‘When my boyfriend suggested it, I thought it sounded like a regular name even though it’s uncommon. 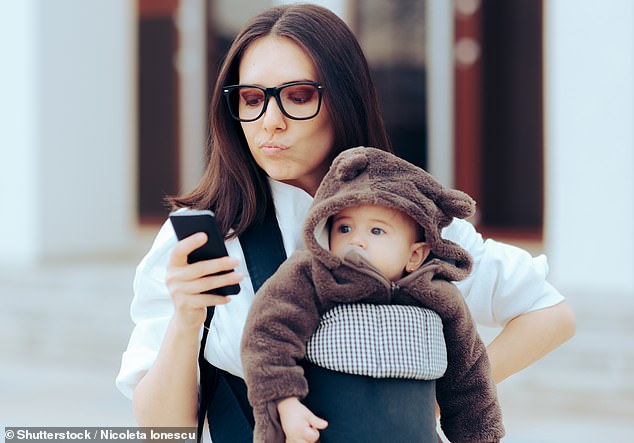 ‘I had definitely heard it before even if I didn’t remember where, but people keep telling me it’s so “unique.”‘

Despite the name always getting a reaction out of people, the mother says she’s bothered by the fact that they never reassure her they actually like it.

The mother says she first doubted her choice of name shortly after giving birth – when a nurse assumed her son was a girl.

She said: ‘When a nurse came into my hospital room after he was born, she read his name on the dry erase board and referred to the baby as “her.”‘ 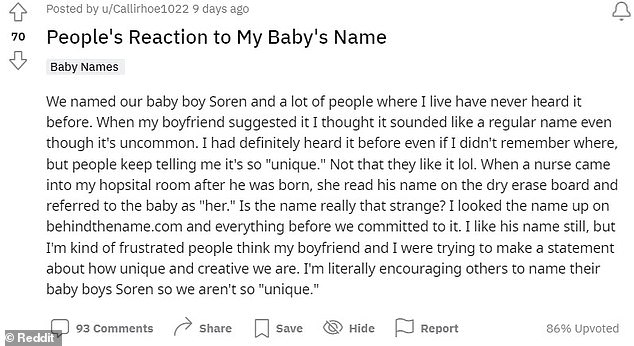 However, despite the confusion and doubts the new mother explained how she is sticking by her decision.

‘I like his name still, but I’m kind of frustrated people think my boyfriend and I were trying to make a statement about how unique and creative we are.

‘I’m literally encouraging others to name their baby boys Soren so we aren’t so “unique.”‘

On Reddit, people were quick to reassure the new mother she’d made a good choice, and many pointed out that the Scandinavian name is only uncommon in some parts of the world.

One person said: ‘I absolutely love the name Soren!! I shied away from it because I’m not Scandinavian but that’s just a personal comfort thing.

‘I feel for you though- my son’s name is very popular in the Netherlands where we are from, but unheard of in North America.

‘It really bothers me that some people think I legit made up the name. Like Soren, It’s a classic! Initially I found myself always explaining the origin almost apologetically but now- I’m over it. If people ask about it I’m happy to answer.’

Another added: ‘I know two Sorens, love the name and never thought it was unusual. It sounds like a hot guy name!’

A third posted: ‘I don’t find it strange at all! It’s obviously not super common but I’ve heard it here and there. I think it’s a nice name.’

More people came to reassure the new mother that her choice of name was not strange and that it was common in parts of the US.

One person commented: ‘It’s not “strange” in the sense of being made up, but it’s a rare name. You seem to be in the US. The data shows that only about 500 boys are named Soren each year nationwide.

‘I’m also American, and the only person I’ve ever heard of with this name is Kierkegaard. I don’t remember any other examples and don’t know anyone IRL with this name.

‘I wouldn’t necessarily take people calling the name unique as a sneak diss. They probably assume you wanted something different.’

Another posted: ‘I think it’s super cute! And it makes me think of Soren Lorenson, from Charlie and Lola lol.’

Someone else said: ‘It’s a great name. Don’t let people’s silly reactions trouble you. People are always baffled if they haven’t heard the name before. Honestly, that attitude will die out in the next few decades, it’s an outdated viewpoint.’

More people commented on how they love the name Soren and one person said that it could be gender neutral, which is why the nurse may have been mistaken

Many people revealed that they didn’t find the name Soren uncommon at all.

One person commented: ‘I grew up with a boy named Soren. I never thought anything of it – cool name.’

And a second posted: ‘I love that name! I have only known it on a girl but I think it could easily be gender neutral.’

Revealed: The baby names on the brink of extinction – including Britney, Bill and Harold

How Britain’s most popular baby names have changed in a generation: Ivy rises from 2,165th in the 90s to fifth and Noah soars from 225th to 1st but Lauren falls from 5th to 567th…so how fashionable is YOUR child’s name?