My four-year-old son looked at me apprehensively and then stared down at my sanitary towel.

It was the first time he’d noticed this pad and the questions came thick and fast.

Until that moment, in his world, blood meant pain. As I explained how normal this kind of bleeding was and that it showed I don’t have a baby in my tummy, his relief was visible.

Now nine, my son is no longer concerned. He and my daughter might see me changing my pad if they happen to be in the bathroom but there’s no shock or embarrassment.

This hasn’t come naturally, though. For years I didn’t speak about menstruation in front of my husband and kids. Any ‘evidence’ – sanitary products or stained underwear – was quickly removed.

I would change the bedding discreetly and pepper my language with euphemisms such as ‘time of the month’ or ‘feeling hormonal’, toning down the ‘squeamish’ reality.

On holiday, I remember holding freshly purchased tampons at my side rather than in front as I would a carton of milk. I didn’t want to show fellow holiday makers that I was menstruating.

Bleeding all the way through to the mattress, dripping on the carpet after a shower or working out what to do with a used pad when there’s no bin felt like revolting little issues that I should keep to myself. 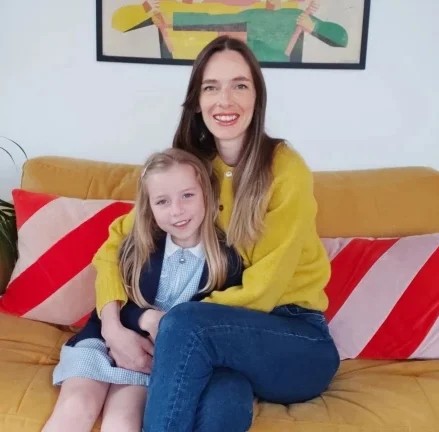 One day, as I tried to disguise changing my tampon in a supermarket toilet with my two littlest children in the cubicle, I suddenly thought, ‘why am I trying to hide this?’

It was a turning point and from that day on I’ve been really open about my period, what it looks like and how I manage it.

So why don’t we speak more about real life menstruation across society: with partners and fathers, children and work colleagues, over coffee, at the office, or in politics, rather than confining it to hushed conversations amongst women and girls?

I’m talking about candid conversations on our flow and how heavy it is, if we have period sex and fears about leaking on to our sofa/work chair/new cream dress.

Bringing the monthly lived experience of half the population into the open would surely improve understanding and empathy, lessening the shame that has hung around the ‘curse’ for so long.

Shouldn’t we introduce the gory mundanity of menstruation when children are small? Seeing period pants hanging in the shower, tampons being used and sanitary towels changed means that secrecy and discomfort are removed, and this, hopefully, leads to better conversations and knowledge.

And that’s important. For example, I have a friend who bleeds copiously every month – so much so that moon cups or period pants aren’t an option. But how much blood loss is too much and when might you become anaemic or need a transfusion?

After opening up about her situation, talking it through with her partner and comparing notes with others, my friend is seeking further investigation.

That’s why I’m so frank about my own cycle. I want my kids to feel comfortable asking questions and talking about the female reproductive body.

We all need a safe space to discuss periods. Yet it often isn’t there.

A work colleague recently confessed that when she bled during sex, her boyfriend told her ‘that wasn’t his thing’. Shocked and shamed, she had no idea how to respond.

Another pal had an encounter with male friends. When they asked how she was doing on a night out, she told them, ‘Not great, I’ve got my period and my flow is heavy’. Their embarrassment was palpable.

I believe there is a role here for me, and other women, to change the public conversation around periods. We must talk more confidently, to a wider range of people, about our monthly cycles: what’s happening and how it feels.

This begins at home, chatting about periods with your family as you would any other ‘normal’ subject. I’m trying to inform and empower my own kids so in the future, they can ask for help, support others and gauge what’s typical and what’s not around menstruation.

But people who don’t have periods must also be more accepting of these truthful conversations. It’s no longer OK to treat periods as ‘other’: something secret, awkward or disgusting that should be hidden or sugared, just like those adverts that, for years, used blue liquid to make periods more acceptable.

And that’s why I use sanitary products in front of my children. I’m determined to be bolder with my husband, male friends and family in talking about periods.

Menstruation must be discussed more in sport, at school, on the telly and in the press. We have made some progress in recent years, but I look forward to a future when the narrative around periods is one of celebration, not concealment.

When my daughter starts her period I hope she, too, challenges the stigma and sexism around female bodies. I’ll teach her to understand and embrace her own menstrual cycle so we can put period shame firmly in the rearview mirror.