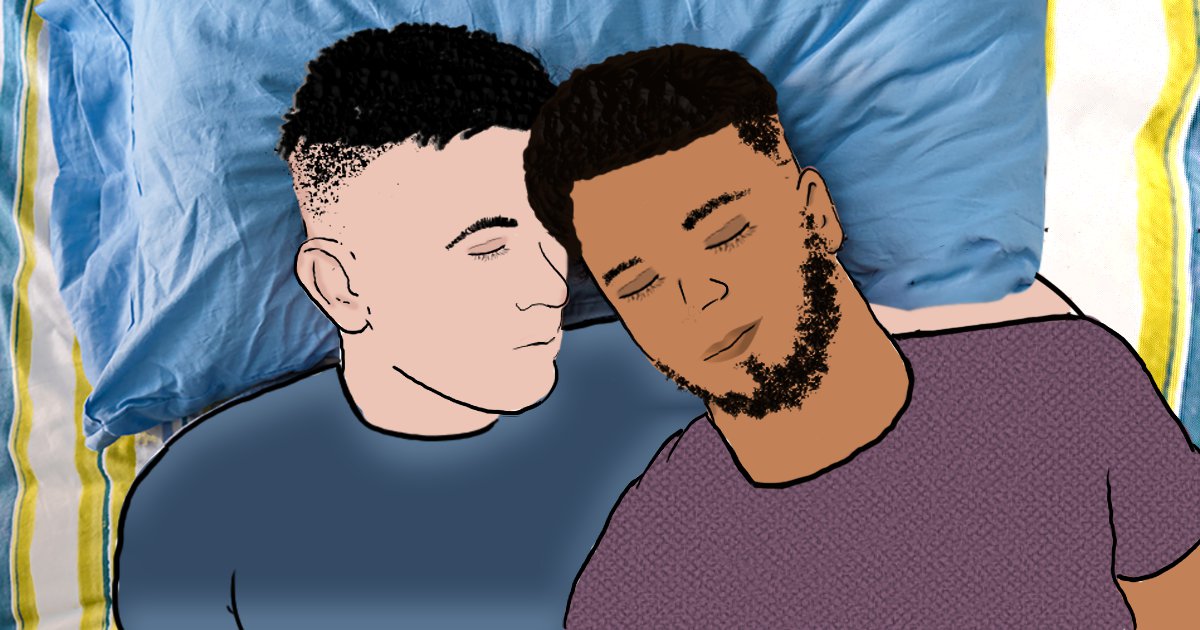 For today’s instalment of How I Do It, our weekly series in which a person shares what seven days in their sex life looks like, we hear from Tom*.

Tom is 24, bisexual and in a relationship with a man.

He describes his relationship with sex as ‘complicated’, citing personal difficulties with the societal pressure he feels to get intimate on a regular basis.

Tom stresses that he never feels pressured by his partner, just his own ‘insecurities that a relationship needs sex to work’.

He enjoys the fact that, after being with his partner for two years, they each know what the other likes and how to turn each other on.

They’re also comfortable trying new things, but Tom would still like their time in the bedroom to be a little more spontaneous and adventurous.

He’s interested in the idea of adding other people into the mix, saying it appeals to him when he’s aroused, but he’s also wary that the emotional impact of doing so ‘would hit me like a ton of bricks emotionally’ after the fact.

Without any further ado, here’s how Tom got on this week…

In usual fashion, the lack of sex over the last week was made up for in an extraordinary manner. It was my graduation and before taking my seat I needed to go to the toilet at the same time as my boyfriend.

He has only met my family a handful of times, so I assumed he followed me because he didn’t want to be left with them. But in reality, he came up behind me pressing his bulge against my back and got me in the mood instantly by kissing my neck.

We huddled inside the cubicle, and initially, it wasn’t the most accessible place, but we quickly made it work and both came in unison like we were singing a duet in harmony.

Nothing to report all in all. There was kissing and cuddling as always with my boyfriend but all PG for today.

I had the hangover from hell and in hindsight, that explains why I wanted to be f***ed so badly today. But as much as I wanted to – I would have even settled for relieving myself – it was just one of the days when I couldn’t get a moment alone.

When I was surrounded by people, I was in the mood, when I was alone, I could think of nothing worse than trying to pleasure myself with a splitting headache.

Wednesday was a pretty big day for my relationship – after two years, I moved into a house with my boyfriend.

What I had pictured to be a romantic sex-filled day being bent over the kitchen counter and thrown around the spare room was anything but.

The tiredness of working a 9-5 and then moving quickly after caught up with me, so much so that I didn’t even have the effort to have a wank – which, for anyone who knows me, is very unusual.

Despite the fact that we spent the majority of the day walking around naked, I find myself needing to lie about having to go to the bathroom or bedroom to relieve myself.

It makes me feel like I’m cheating, but truth be told, having sex can’t just be spontaneous for me, especially as a bottom in a gay relationship.

It takes at least a day of preparation and often by that time I am not even excited about it because I have been thinking about it for so long.

However, I finished first and quickly regretted the decision – something I find myself doing often. It doesn’t take a professional to work out that post-nut clarity is very real with me.

With the weekend approaching, I decided today I would pop a few Pure For Men fibre tablets to make sure if the weekend did get steamy, it would be a clean session.

Started the weekend off with a bang. Well, not literally, but with the lack of action I have seen this week, I will take whatever I can get.

After seeing his toes curl and hearing him moan my name, I wasn’t too fussed about finishing myself off –  the thrill of making someone else climax and seeing them pant is more than enough for me, anything after that is an added bonus.

Yet again, the bane of my existence impacted our sex life again – our schedules.

It was my first day off in the week, but he was out of bed and ready for work at 11am, before I could even get a chance to sort out his or my morning wood.

However, for me, that didn’t last long because, as well as suffering from post-nut clarity, I also massively suffer with hangover horn.

I’m usually too hungover to have sex with others, so for the day, my hand, computer screen and I became a trio stronger than Kim, Kourtney and Kylie.

After a day spent in bed yesterday, I felt guilty and made the most out of my Sunday.

I was out all day and travelled in the evening for a work event. Sex was off the cards, but it didn’t stop a few flirtatious and raunchy Snapchats from being exchanged.

I did find myself having a wandering eye as I walked through the city centre thinking about how much sex others may or may not be having.

*Names have been changed.

How I Do It

In Metro.co.uk’s How I Do It you get a sneak peek into a week of a person’s sex and love life – from vanilla love-making to fetishes, threesomes and polyamorous relationships, they reveal it all.