Life is full of fraught encounters. In the “How Do You Do It?” series, Samantha Selinger-Morris examines the prickly scenarios we sometimes find ourselves in and asks experts how best to deal with them.

Growing up in a “good Catholic family”, Sharon remembers being a huge support for her older sister who she gave birth out of wedlock when she was in her early 20s.

Sharon (who wishes to remain anonymous for privacy reasons) was 14 at the time, and she remembers her religious father’s dreadful reaction. 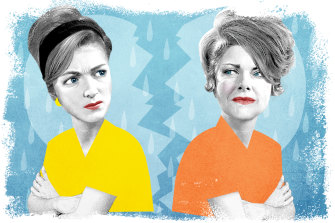 “He just kind of shut her out, he was horrific,” she says. (Though he later “fell in love” with the baby, Matthew.)

“I was just, like, infatuated with this little baby. I remember saying, ‘You go out with your friends’ if [her sister] had a date. ‘I’ll go into your bedroom and look after Matthew.’ I’d be the little mother.’”

Fast-forward nearly 40 years, and the sisters hadn’t spoken in three and a half years. Nothing – not even the death of two aunts and the engagement party of Sharon’s niece, to whom she was very close – could entice the two to utter a single word to each other.

“We’d see each other at a funeral, and go, ‘God, seriously, we can’t even talk at a funeral’,” says Sharon, an aged care provider in Sydney.

Those around them couldn’t believe it. “You’re sisters, you can’t keep not talking,” Sharon recalls people saying. “I said, ‘I know, but it has to be the right time. It’s not time yet. I don’t know when it is, but it’s not now.’ Because I was angry.”

The estrangement began when Sharon’s sister turned 60. Though she knew it was her sister’s birthday the next day, she had been working around the clock on a big project.

“All the night before, I’m like, ‘I’ve got to be up early, it’s her birthday. I’ve got to remember to call her.’ I didn’t call her.” In the chaos, she forgot.

Two days later, her sister sent her a text: “How dare you.”

“It just went really nasty,” says Sharon, who then called her sister. “It just blew up. She was like, ‘Everything I’ve done for you’.”

Sharon’s sister had supported her financially when she separated from her husband, and taken her on a trip overseas. “She just threw every single thing back at me in a text.’”

It was a gut punch.

“It’s the disbelief. ‘How could you voice this? How could you throw this back at me?’ I said to her, ‘I honestly thought you were doing this from the goodness of your heart. You were pushing me, knew I had to get out of my marriage’. … She took me to Greece and London. So, all that got thrown back in my face. That hurt. That really hurt.”

At times, she would be hit, anew, with the shock that they hadn’t spoken in years, that they were estranged – something neither she nor her sister had decided to do.

“It just gets to that point, ‘Oh my god, how did that happen? How did we get here?’ But people do. I think it’d be different if you were dwelling on it daily, but the fact is, you don’t. You get on with life, and you just do stuff.”

It is a common experience with estrangement, says Bruce Smythe, a professor of family studies at the Australian National University.

“The thing about estrangement, it’s a bit like hatred, people get frozen in time,” he says. “It’s like, once that bell rings, you can’t un-ring it. You know, Dr Phil says, ‘Would you like to be right, or be happy?’ Someone takes a kind of rights-based approach, and they can’t pick up the phone. So they get frozen in time.”

“I think it’d be different if you were dwelling on it daily, but the fact is, you don’t. You get on with life, and you just do stuff.”

Estrangement, he says, is more likely with family members who were once very close.

“They say hatred is love with its back turned,” says Smythe. “The closer you are to someone and the more you know about them, and all those little hooks you can put into love, the more pronounced the opposite can be.

“When you don’t really care about someone or you’re indifferent, then it’s neither here nor there. Whenever you’re really close and emotionally bonded in a relationship, all of a sudden that wedge takes you to places that you may not have been aware of.”

Secrets, silence and taboo topics are at the heart of estrangement. Money issues and allegations of family violence or child abuse, for instance, are common drivers of family estrangements, explains Smythe, who has interviewed many families about estrangement for a book on post-separation parenting. Because those issues are taboo, people feel ashamed, and don’t want to talk about it. Which adds to people becoming “frozen in time”.

“No one likes to talk about money, so if there’s a family dispute around money, that’s not going to be very public,” says Smythe. “Where do you go and who do you talk to about this stuff? Because it’s shaming.”

Indeed, the instigation for Sharon’s sister being so upset with her was a feeling of shame. “Her husband and her family friend said to her, ‘Oh, so is Sharon doing anything for your birthday?’ There were these comments.” (Sharon’s sister felt slighted because she’d helped Sharon celebrate her 50th.)

The impact – from family members no longer being there for one another – can be devastating.

That’s because social family support is a “real protective factor” for people managing their own mental wellbeing, says Professor Caroline Hunt, a clinical psychologist and president of The Australian Clinical Psychology Association.

People who are estranged don’t necessarily have to be physically cut off from each other. Sometimes, being estranged emotionally from people who share a house is even more painful, Hunt says, as has been the case with patients of hers whose parents “don’t accept a child because of their sexual orientation, or accept a particular choice of situation”.

“Maybe it’s even harder because you’ve got that constant reminder of this sort of individual who should be part of your life, but who isn’t.”

Estrangement can lead to positive personal growth, however, if it’s taken as an opportunity to do some self-reflection, Hunt says.

Such was the case for Sharon, whose sister reached out to her by text message when Sharon, 54, was diagnosed with breast cancer earlier this year. It led to a profound realisation about the way she’d always lived her life. Sharon called her sister to speak about the fight that ignited the estrangement.

“In the busyness of life, that’s where you can f— up,” says Sharon, whose nature is to “work my butt off”. “That’s where you can f— up relationships and friendships and everything else because … you’re not prioritising it properly… Work consumes you, and then it’s like, ‘Why am I doing this?’ You’re sabotaging other more important parts of your world.”

So how can others end an estrangement?

“If there is some chance of there being a reconciliation then I think it would be thinking about, ‘OK, maybe I do need to take the first steps to make this happen rather than wait for some event to happen’,” says Hunt, adding that people might consider if they need to take some responsibility for what led to the estrangement, and calmly discuss it with their loved one.

“It’s also that notion of empathy, putting yourself in the shoes of another person as well,” she says. “To think about how they’re feeling as well, sometimes that can actually take the heat out of a situation.”

Hunt recalls a patient did this before approaching her estranged mother, who neglected her as a child. ”It didn’t really mend their relationship, but it certainly helped in terms of the high levels of distress and anger that was felt.”

Sharon, whose prognosis is good, is relieved the estrangement is over.

“The thing is, it can drag on,” she says. “This could have easily gone on for 10 years. I can sit here and say [to others] ‘You shouldn’t allow that to happen’, but I won’t tell people that. People have to find out for themselves. Would I ever do that again, in my lifetime, with a family member? Maybe I would approach things differently. Talk. Feel uncomfortable, but talk.”