THE word menopause screams “hot flushes” – but it’s so much more than that, and it’s vital women know.

Most women will experience at least one symptom caused by the change (on average seven), which usually starts from around the mid-40s. 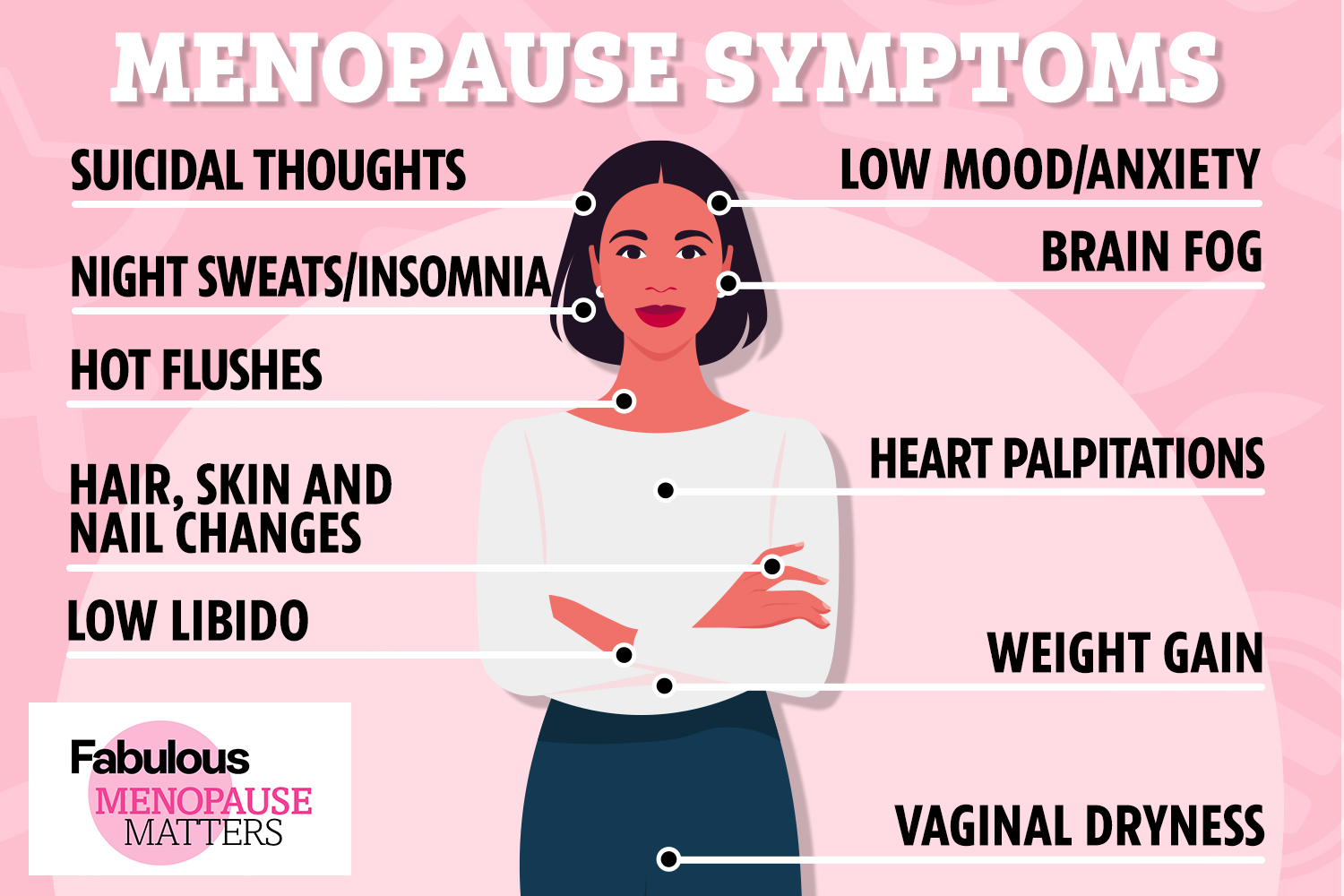 “Some of these can be quite severe and have a significant impact on your everyday activities,” the NHS warns.

In short, the menopause is a transitional period when hormones are depleting, namely oestrogen.

This doesn’t just cause periods to stop. Sex hormones act all over the body, from the brain, skin, vagina and more.

It means the symptoms of the menopause are hugely varied, and women have no idea what card they’ll be dealt until they hit it.

Some women are clueless that their problems, ranging from “brain fog” to panic attacks, are caused by the menopause.

Raising awareness of the impact of the menopause is one of the key aims of The Sun’s Fabulous Menopause Matters campaign – backed by doctors, politicians and a whole host of celebrities – including Lisa Snowdon and Davina McCall.

Dr Philippa Kaye, a London-based GP and author, reveals exactly how the menopause can affect the whole body in her book “The M Word”.

And don't forget – no women has to put up with these debilitating symptoms if they are affecting their life.

It’s no wonder hot flushes have become the image of the menopause, given they are the most common symptom.

According to a Sun Fabulous survey of 2,000 women who have either reached menopause or are going through it, 70 per cent of women experience hot flushes.

Hot flushes can last anywhere between a few seconds or a few minutes, and although usually centered in the chest and neck area, can involve the whole body.

Dizziness, heart palpitations, anxiety and headache can come with them – oh the joys!

But what actually causes hot flushes?

Dr Philippa says it's due to a fault in the body’s temperature regulating system, which helps us sweat when we are hot, and shiver when we are cold.

“Sensitive as this centre is, it doesn’t respond to changes within about half a degree Celsius – except during the perimenopause, when the body seems to respond to tiny changes, something as small as moving rooms or having a hot drink,” Dr Philippa says.

“We aren’t exactly sure why this happens, but it is thought that the changing levels of oestrogen affect the production of chemicals in the brain such as serotonin and noradrenaline which then seem to disrupt the working of the thermoregulatory centre.”

Night sweats were the second most common problem for ladies, at 62 per cent.

Sleep difficulties, including insomnia, are all too common for menopausal women, affecting 54 per cent.

It comes down to both the physical and psychological changes the body is undergoing.

Dr Philippa said: “Progesterone is sometimes considered a sleep hormone as high levels of it can cause sleepiness by increasing the levels of a neurotransmitter (a chemical in the brain) called GABA.

“Therefore it would make sense that lower levels could cause insomnia.”

On top of this, the night sweats, achy joints and muscles and racing thoughts that come with depression or anxiety, and it's a recipe for a sleepless night.

This is a common problem in the perimenopause – the lead up to periods stopping.

“Some women find that PMS symptoms, such as irritability or low mood, get worse during the perimenopause,” Dr Philippa said.

“Symptoms of anxiety include: feeling tense, fearful or even panicky and those fears seem to be persistent and perhaps excessive for whatever the issue may be, though there may be no specific issue at all.

Irritability and mood swings are also a common feature of the menopause, which can be confusing for those around them.

Too many women deal with suicidal thoughts alone through the menopause, as our survey found it impacts three per cent.

Statistics show that suicide is most common in women when they are at a menopausal age.

It all ties into the impact that rollercoaster hormones have on mental health, causing anxiety, depression and low self-esteem. Or it may have no clear root cause.

If this has impacted you, don’t feel like you are alone.

If you don’t feel you can talk to a friend or relative close, call someone like the Samaritans (dial 116 123).

Ever find yourself with the words “at the tip of your tongue”?

Or perhaps you keep forgetting your keys, or to turn the hob off in the kitchen – some 16 per cent of women suffer with memory or concentration due to the menopause.

“That is what it feels like, like nothing is clear any more and you can’t focus on anything. This can lead to difficulties at work and at home but also can be incredibly frustrating and anxiety-provoking.

“There are particularly high levels of oestrogen receptors in the hippocampus, which is important for memory and emotions, so it makes sense that these can be affected.”

Perimenopause can leave some women suffering from headaches with flu-like symptoms.

Dr Philippa said: “The fluctuating levels of oestrogen and progesterone can trigger headaches and migraines.

“If you have migraines related to your period and your cycle length has become shorter, you will get more migraines. However, some women find that after the menopause they no longer get migraines – finally a benefit!”

The 24 per cent of women who said they’ve gained weight during the menopause will be glad to hear it’s not necessarily their fault.

Women may notice they have got an extra tyre round their middle even though they have no recollection of a change in diet.

Dr Philippa explained: “Oestrogen affects how and where we store fat and it is the falling oestrogen levels which mean that fat is deposited around the tummy, changing the shape of your figure.”

She added the majority of people are overweight before they hit the menopause, exacerbating the issue.

Muscle mass also declines in older age, which contributes to piling on the pounds.

More than one in ten (12 per cent) of women say they get vaginal dryness during the menopause.

This can cause discomfort due to rubbing, itchiness, pain when urinating, urinary tract infections and smelly discharge (due to infection).

It can also spell trouble for relationships, making sex more painful, less enjoyable, or even kill the mood before things get started.

Dr Philippa said vagina dryness tends to be a later symptom of the menopause because its due to tissues of the vagina losing their elasticity – and therefore capacity to stretch during sex – in response to oestrogen decreasing over time.

Thanks to a change in pH levels in the vagina, there is also less production of glycogen – a protective bacteria in the vagina.

Libido is a non-medical term for your sex drive, and many women complain that it vanishes during the menopause, while others see it increase.

Dr Philippa said everything from anxiety, fatigue, irritability, sweating and vagina dryness can all put a women off sex.

It’s not just due to falling oestrogen, but testosterson – the male sex hormone that women also produce in smaller quantities – at play.

“Testosterone is produced in the ovaries from puberty, but the amount produced gradually falls, so by the time you reach the menopause your levels are about half of what they were at the peak in your 20s,” Dr Philippa said.

Testosterone is also implicated in sexual pleasure and arousal, which can explain why even when women do get between the sheets, they just don’t enjoy it as much anymore.

It’s not just men that have to contend with hair loss.

Some seven per cent of women also blame the menopause for thinning hair, our survey found, while other stats suggest it’s near to a third.

Hair loss is usually around the hairline, temples and top of the head, which can be difficult for women who feel their locks make them feminine.

Dr Philippa said: “Falling oestrogen levels mean that hair spends less time in the growing phase, so it cannot grow as long as previously before falling out.”

At the same time, women may have to contend with more facial hair, as Dr Philippa said: “The falling levels of oestrogen mean that there isn’t enough to counteract the effects of testosterone.”

The menopause has a knock on effect for skin, as collagen and fat storage (which gives you that plump look) relies on oestrogen.

For some women their skin will feel drier, more saggy and wrinkly.

But for others, they may get acne for the first time, as Dr Philippa says: “Oestrogen has an anti-acne effect. As levels fall it seems to unmask the effects of testosterone, and testosterone can dominate.

“Testosterone can stimulate the sebaceous glands, making them secrete thick greasy sebum, which is why some women notice oily skin and adult acne can appear.”

Dr Philippa said: “Nails are made of a protein called keratin, which is the same protein that makes hair, even though hair and nails have totally different textures!

“The falling levels of oestrogen in the body affect the nails making them more dehydrated.”

It's easy for women to brush off their aches and pains as just part of old age.

But it's often the menopause itself causing joint pain, meaning it can be treatable.

Dr Philippa said joint and muscle pain or stiffness is common in the neck, shoulders, elbows, wrists and knees. It can be worse in the morning.

"It is thought that oestrogen may act as an antiinflammatory and as levels fall the joints become inflamed, making them swollen and painful," she said.

Dr Philippa said: "Palpitations related to the perimenopause are a result of declining oestrogen and progesterone levels.

"They can also be linked to hot flushes or with anxiety or stress.

"There are many causes of palpitations apart from the
menopause, such as anaemia or thyroid issues, so please see your doctor.

"If you have palpitations which last longer than five minutes or are associated with dizziness, shortness of breath or chest pain please seek urgent medical advice."

There are many more symptoms of the menopause that you may not have read here.