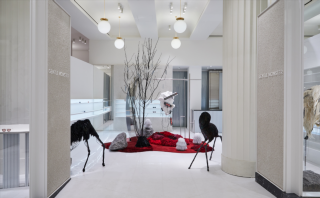 LONDON — South Korean label Gentle Monster is known for its cool eyewear designs as much as it’s known for its theatrical retail spaces, complete with moving installations, audiovisual displays and post-apocalyptic concepts.

In fact, the eyewear label employs almost 10 times more spatial designers than product designers and owns a robotics lab, to bring all of its fantastical ideas to life, from in-store alien installations to upside-down trees and giant satellites.

“It’s a huge resource for the business. We don’t just have the technological ability but also the creativity to put these ideas out there,” said Gary Bott, the label’s U.K. director.

But after a year of store closures, is the in-store experience still so pivotal for the label?

According to Bott, the answer is a resounding yes. “That’s our formula and we will never deviate from that,” he said, pointing to a continued store rollout across Asia, where the last six months saw the opening of two new spaces in China and two in South Korea.

A new multibrand concept, dubbed Haus, is also set to open in Shanghai later this year and introduce new categories and brands beyond the Gentle Monster family, which also includes the experimental dessert brand Nudake and beauty brand Tamburins.

But it’s a different story when you look at the label’s European business, which includes a Selfridges concession and a flagship space on Argyle Street here, near the previously busy shopping thoroughfare Regent Street. The latter had to shut its doors, and the company is shifting its focus to a concession-only model in Europe.

“It was always the plan to have two locations but we were forced to decide which one to close. The Argyle Street location was five times bigger in size and more focused on discovery, while Selfridges is more established and there was a more harmonious balance you could say between brand and product,” said Bott, explaining that the decision to close the doors of the brand’s directly operated stores was purely a response to the pandemic, rather than a broader strategy shift away from physical retail.

“Ultimately, it was a decision based on the decline of footfall and sales. We had to look at it in terms of overheads which were disproportionate to the sales, unless landlords were able to offer rent reductions. That’s why we are seeing so many stores close on the high street,” he added.

There are plenty of reasons there is such “a different message in the West,” according to Bott: On a general note, Asia had a far quicker response to the pandemic and Gentle Monster itself has a longer presence, wider store network and cult-like following across the continent, where South Korea remains its primary market.

“China is close behind and the ratio is shifting as the Chinese economy goes from strength to strength,” said Bott.

Despite a bleaker economic outlook and little remaining physical presence in Europe, Bott is still optimistic about re-energizing the European business post-lockdown.

“Even if the business will always be stronger in Asia, where we have more physical coverage, the brand can be as strong worldwide,” he said, pointing to new shops-in-shop concepts in the works, plans to renew the Selfridges space with new installations and designer collaborations to mark the brand’s 10th birthday, later this year.

“The primary focus going forward is to strike a balance between brand and product. We don’t have as much space anymore, so we need to be even more creative,” he explained. “Collaborations will also help our business to rebuild because they’re happening at the time we’re looking to reopen.”

Heron Preston is said to be among the label’s upcoming collaborators, joining the likes of Marine Serre, Diplo and Yoon Ambush.

A dedicated e-commerce site for the U.K. and Europe is also in the works, in order to shift operation management to the U.K. and no longer have to ship product from the brand’s Seoul headquarters.

But as lockdowns begin to ease, Bott is expecting the focus to shift back to physical retail sales, which used to make up to 90 percent of the brand’s total revenues in the U.K. A small 7 percent came from e-commerce and the remaining 3 percent from “strategic wholesale.”

“It will balance back once we come out on the other side,” said Bott, adding that for the last year, the brand’s main source of revenue in the U.K. has been its Selfridges online business. “When stores reopen next month it will be 50-50 and then physical will overtake once consumers gain confidence to re-enter society. There’s still fear and challenges with getting into Central London, but confidence will come back. We need some balance being restored in our lives and in consumer behavior.”