Frankie Bridge has opened up about the realities of being a step-parent, saying that she prefers to keep that aspect of her life private.

While celebrities often choose to be open about many aspects of their lives, most understandably stay a little quieter when it comes to their step-children.

Let’s take a look at the celebrity mums who are also step-mums.

The Saturdays singer, 32, said that while she considers herself family, the teenager has chosen not to call her "a step-mum" and that they see her role as more as a "bonus".

Responding to a fan asking if she was a step-mum during an Instagram Q&A, Frankie shared a photo of her sons Parker, 7, and Carter, 5.

The caption answered the question, saying: "True. I am indeed. It's not something I talk about much as him and his mum aren't in the same industry as us."

"So I keep that part of our life private. I've also never really chosen to be called a step-parent."

“I’ve also never really chosen to be called a step parent. He has his parents. I’m just a bonus family! Ha”.

When Stacey met Joe, he already had a son Harry from his previous relationship with Emma Sophocleous.

Harry is now 13, and only occasionally appears on Stacey’s social media channels.

Meanwhile, Joe is Stepdad to Stacey’s boys, Zachary and Leighton.

Appearing on the podcast Step Life last year, Joe opened up about his blended family with Stacey – who he proposed to on Christmas Eve.

He said: "Harry and I talk to each other every day, we see each other every couple of days, he only lives 20 minutes away from me and at the beginning, maybe even five years ago, it's completely different to what it is now."

Fearne’s husband Jesse Wood is also dad to a son and daughter Arthur, 18, and Lola, 14, which made her a step mum before she was a mum.

She said: "It instantly highlights the separateness and distracts from the ‘family’ bit. As the decades' pass and social ideals are batted away like archaic flies, a family can be anything it wants to be, but we are still getting our heads around the labelling part.

"Together, we are a family. Sometimes the older two are with us, and sometimes they’re not – either way, they’re always cogs in our family wheel in equal measure. We have raised the kids as siblings; there is no ‘half’ about it."

Jesse and Fearne are also parents to Rex, 7, and Honey, 5.

Christine is step-mum to Frank’s two daughters Luna, 15, and Isla, 13 from his previous marriage to Ellen Rivas.

Christine has spoken openly about being a step-mum to the girls and last year wrote a touching tribute on Instagram to celebrate Isla’s 13th birthday.

She wrote: "What a beautiful young girl you are! I feel very proud to be your step-mum. We love you so much." 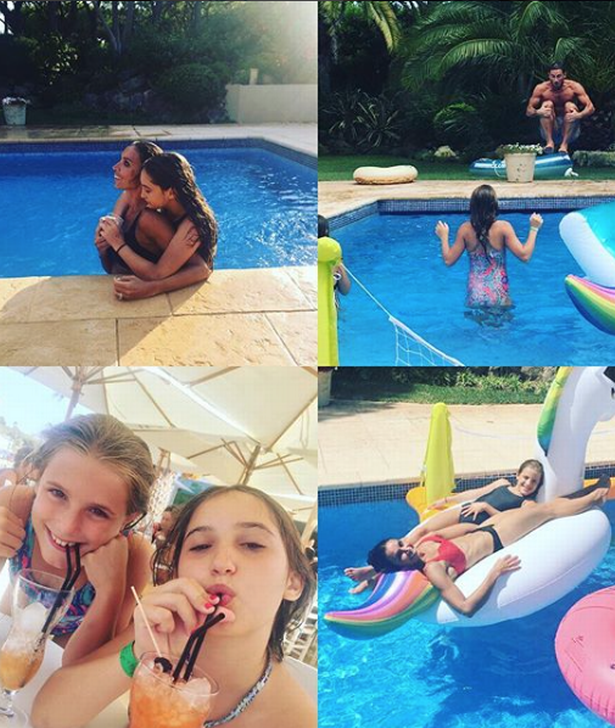 "They both wrote the most beautiful cards which made me cry," Christine said. "I couldn't believe how much they loved me.

"She went on to say, 'I love you being my step-mum', and so I started to cry. I'm proud I have that kind of relationship with them."

Christine and Frank are also parents to their own daughter, Patricia, who was born in 2018.

Loose Women star Nadia Sawalha is step-mum to Izzy and Fleur, her husband Mark’s daughters from his previous marriage.

Nadia and Mark are parents to Kiki, 12, and Maddi, 16, who regularly feature on Nadia’s social media while her step-daughters chose to stay behind the scenes.

Speaking on her podcast, the TV star described their first meeting in 2018 when Izzy was eight at the time and Fleur was just three and how she used a song to win the girls over.

She said: "Even their names were the names of rock star children. Izzy and Fleur. They were just trendy names. I felt 'I am a bit naff. I am this plump, D-list, daytime presenter'. That's what I thought.

"[Izzy] said 'I didn’t know we were meeting somebody. And then you pulled up and then this mad woman pulled up and said 'Hello! I hear I call you Bob.' She said it was just loads of mad hair. And we took her to McDonald's. And we sang. And she said that broke the ice as she wanted to learn the song."

Jennifer Lopez is engaged to Alex Rodriguez, who has two daughters from his previous marriage making her step-mum to the Ella, 10, and Natasha, 14.

Meanwhile, JLo is already parents to 12-year-old twins Max and Emme from her former marriage to Marc Antony.

The singer recently shared a gorgeous photo of the couple and the four children on her Instagram page of them all cuddled up in bed.

She told People last year: "Kids are so beautiful and open to love and new friends. I was so loving to his kids, and he was so loving and accepting of mine, and they embraced each other right away. [It was] 'I get a new bonus brother and sisters to hang out with all the time, and it's nice."

Kate Ferdinand is a stepmum to husband Rio Ferdinand's three children, Tia, 8, Tate, 11 and Lorenz, 13, following the tragic loss of their mum Rebecca Ellison in 2015.

Kate, who has since welcomed a son named Cree Ferdinand with Rio, opened up on being a step mum, saying she was "naive" by becoming a step-parent at the age of 27.

"I was used to just looking after me," Kate said.

"I didn't really cook. I just went out for dinner or to my mum's. Looking after three kids and worrying about them before myself was something I've never done before."