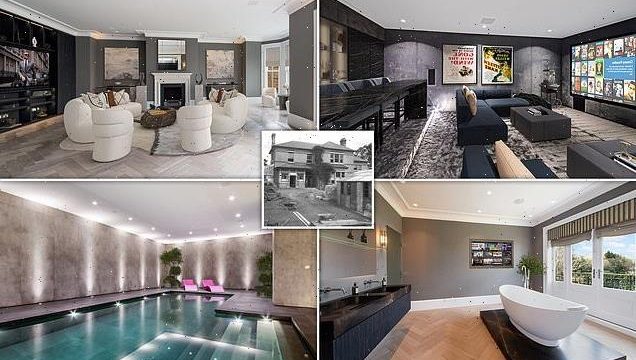 Could this be YOUR new HQ? Mansion built on the site of World War II MI6 spy base in Arkley goes on sale for £8.5million boasting a pool, home cinema and panic room

A former MI6 spy base that played a crucial role in intelligence gathering during World War II is now going on sale after undergoing a luxury makeover.

Rowley Ridge, in Arkley, just outside London, which used to be the site of a top-secret base, is on the market for £8.5million.

Formerly a highly secure base, set in an Edwardian mansion, which was demolished for security reasons after the war, the site on Rowley Green Road was taken over by luxury development company Domvs London, who built Rowley Ridge as a replica of the mansions that housed MI6.

The new 11,000 sqft property, which is brought to the market by Beauchamps Estate, counts six bedrooms and is perfect for entertaining, with its own cinema, games’ room, gymnasium, swimming pool and spa steam room.

Inspired by its covert past, Rowley Ridge also has its own panic room, a state of the art CCTV system with remote monitoring and a biometric entry system.

Rowley Ridge, in Arkley, just outside London, used to be the site of an MI6 based used to gather information about the Germans during the second World War, and will go to a new owner for £8.5million (Pictured: The main reception room leading to a terace) 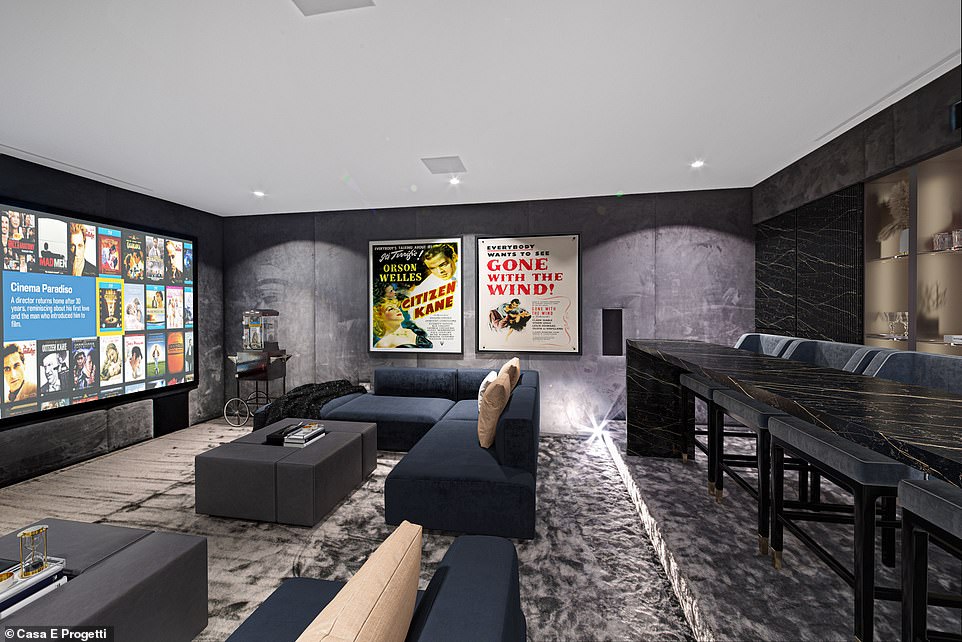 Rowley Ridge’s soundproof cinema room, which comes with a state of the art sound system, plush velvet carpet and its own cocktail bar, with classic movie posters on the walls 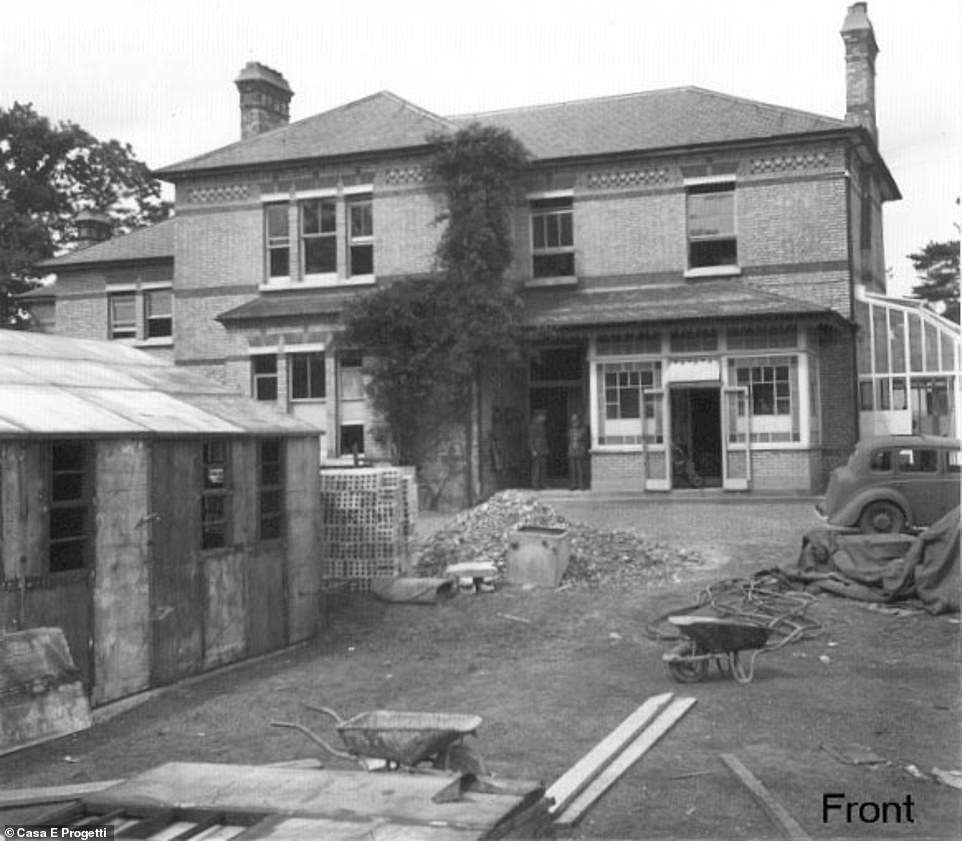 The front of a villa used by MI6 in Arkley during WWII after which Rowley Ridge was modelled. The leafy village was chosen by Churchill thanks to its altitude

Arkley and Rowley Ridge were established as a top secret intelligence facility early on during World War II at Winston Churchill’s demand.

MI6 set up a Radio Security Service (RSS) to intercept wireless messages emitted by enemies in Britain as well as transmissions from German boats.

It was originally based in HMS Prison Wormwood Scrubs, with wireless transmitters on the roof the prison and decoders and operators from MI6 working from the cells.

However, after Woormwood Scrubs was targeted by several air attacks in 1940, it was deemed safer to relocate the intelligence post outside of London. 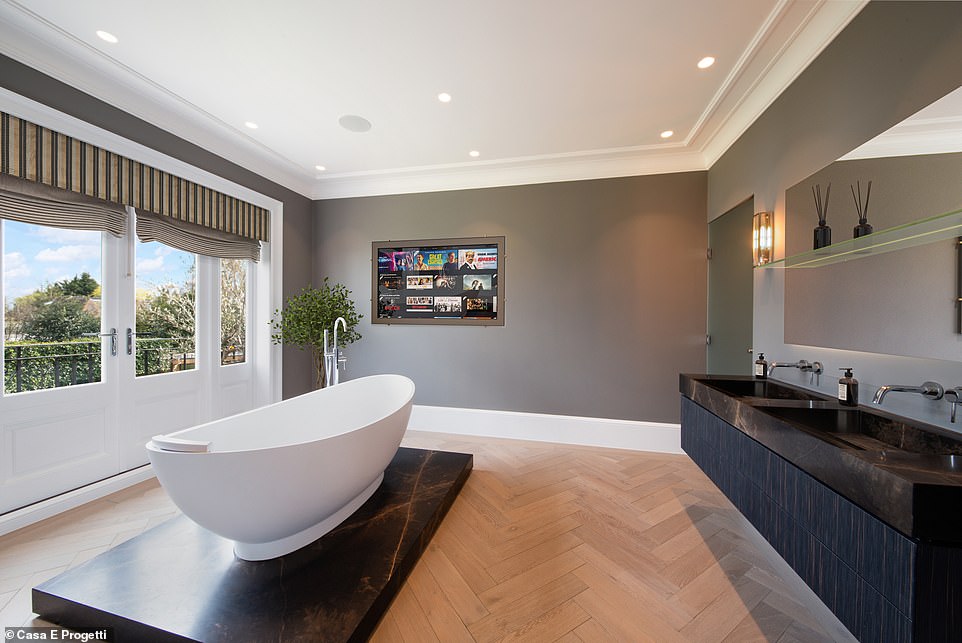 The house was rebuilt and fitted with beautiful fixtures such as a free standing bathtub on a markle step in the master bedroom’s en-suite, pictured 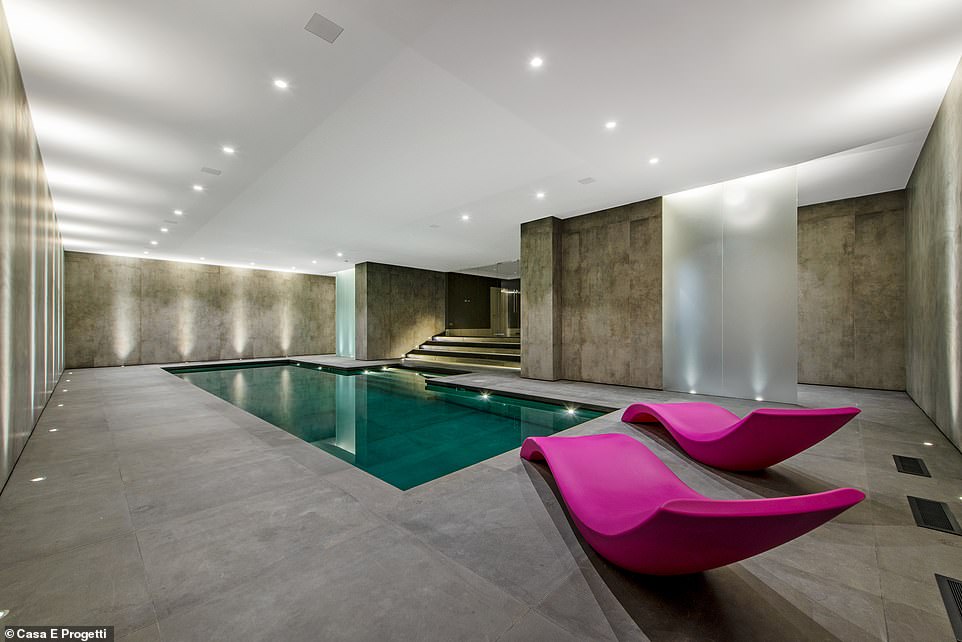 An indoor pool with a marble deck, a heath suite with a steam room and spa as well as a separate gymnasium can be found in the property’s basement

Churchill chose Arkley because the village is 440ft above sea-level, making it an attractive location for eavesdropping on transmissions.

Several country houses were requisitioned by the government in order to set up their bases, including Rowley Ridge.

The base’s role was to support the code-breaking team, located at Bletchley Park, and all the houses were guarded by police, with bullet proof doors and windows with wireless transmitters as well as advanced technology placed on the roof.

Historian Hugh Trevor-Roper, who later became known as Lord Dacre, was one of 55 analysts who worked in the houses. 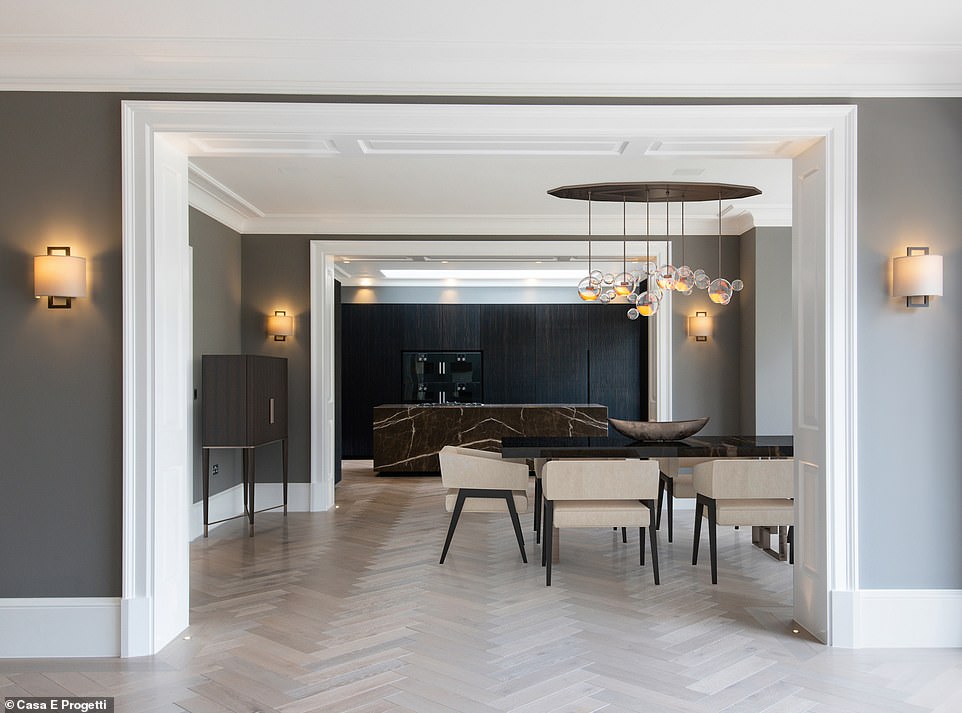 The open-plan ground floor houses a dining room and a kitchen with a marble central island and concealed cupboards, pictured 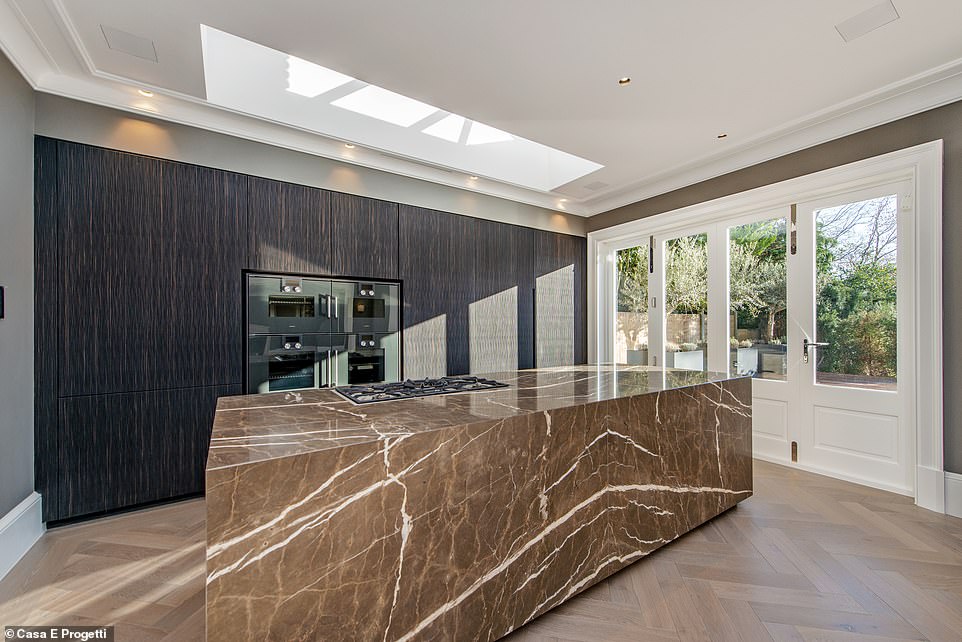 The kitchen was made with custom-design units and was fitted with Gaggenau appliances which are hidden in fold away cupboards, pictured

The men transcribed suspicious broadcasts intercepted by the RSS and would send them to Bletchley Park, where another team would work on decoding them before sending them to Churchill and the War Cabinet.

Later on during the war, in 1944, the Arkley houses were used by the Prime Minister to send strategic radio messages to mislead the Germans about D-Day.

And while the site is infused with military significance, the new build is complete with state of the art fixtures, including a grand entrance and a private golf course. 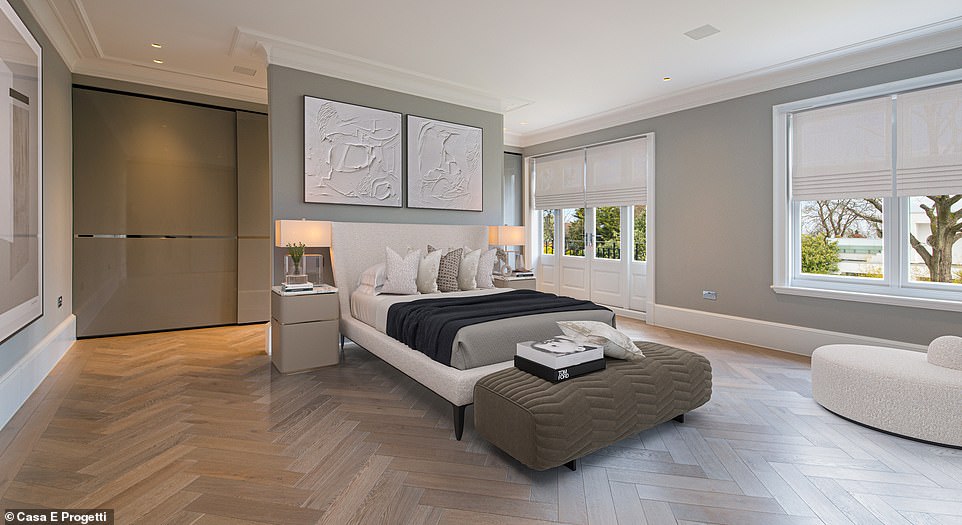 The master bedroom, takes most of the back of the first floor and comes with its own private balcony, en-suite and walk-in closet 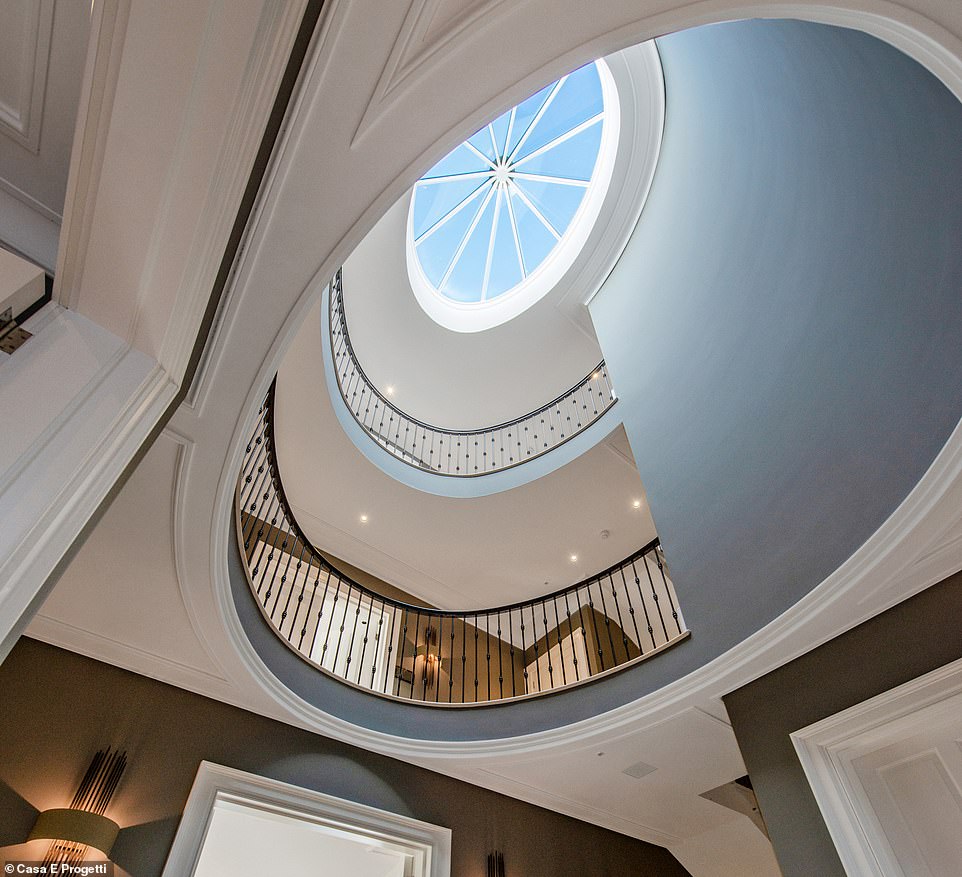 Rowley Ridge was built with a beautiful grand entrance with a three-storey staircase topped with a cupola soaring through the house, pictured

Rowley Ridge seen from outside. The house’s facade was build with Edwardian influences to match the design of the original house, which was demolished after WWII for security reasons

The two-stories tall house, which also has a basement is topped with a three-stories atrium with a cupola soaring through the roof.

A family room and a study can be found at the front of the house, while a 70ft-wide reception welcomes guests at the rear with two large French doors opening to the garden.

Just off the main reception room is the fully fitted custom-design kitchen, which has a veined marble central island and a breakfast bar, Gaggenau appliances, bespoke units and concealed cupboards.

A bathroom and an utility room are located on the same floor. 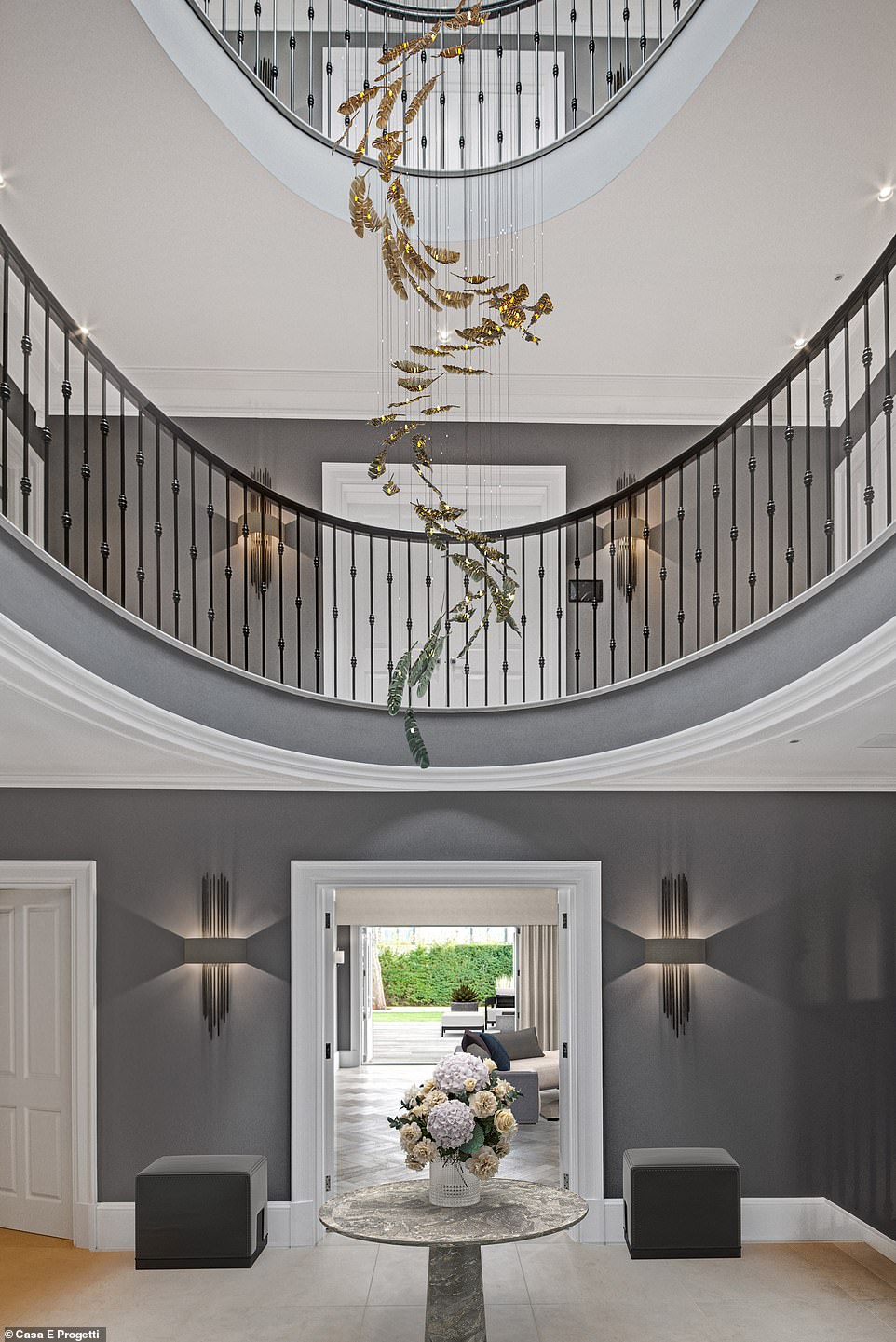 A beautiful drop down chandelier can be admired in the house’s grand staircase. There is a circular landing leading to the stairs on each floor 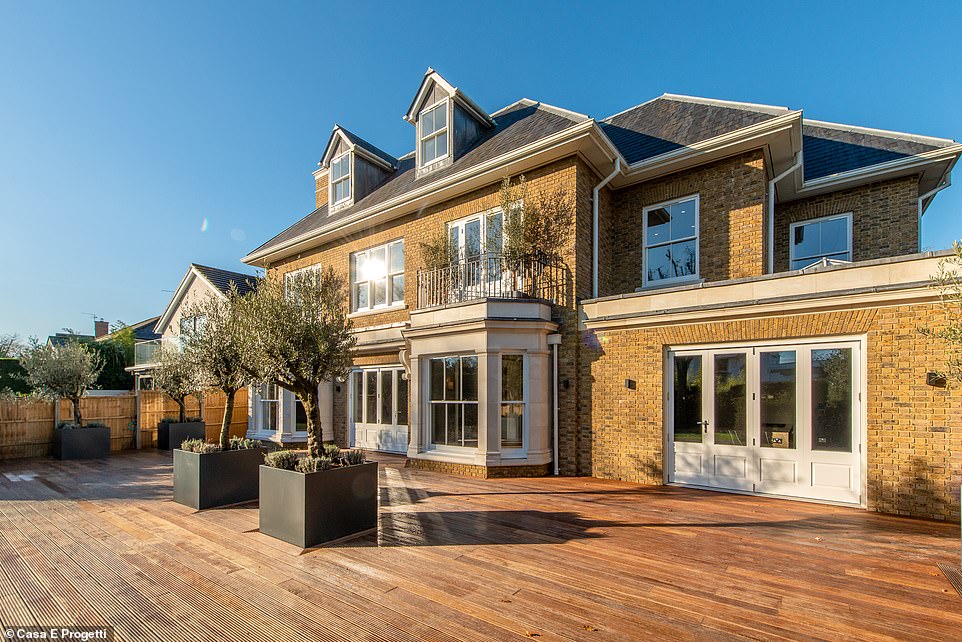 The house opens to a huge terrace at its back, perfect for entertaining, and the garden has a double garage and plenty of parking space for guests 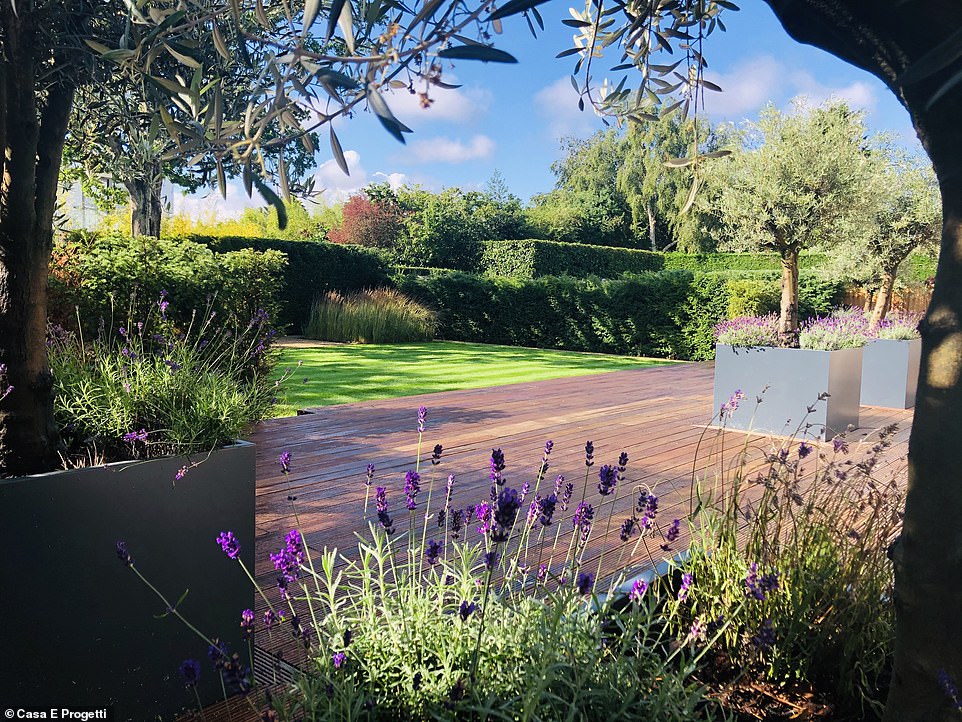 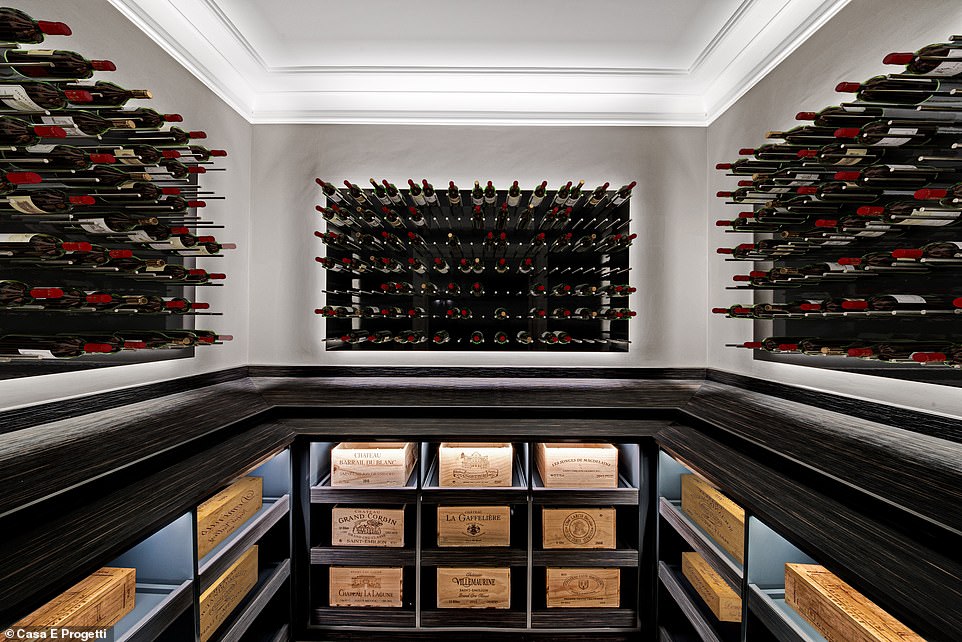 No £8.5million property would be complete without a well stashed walk-in cellar, which is located in the entertaining quarters in the basement 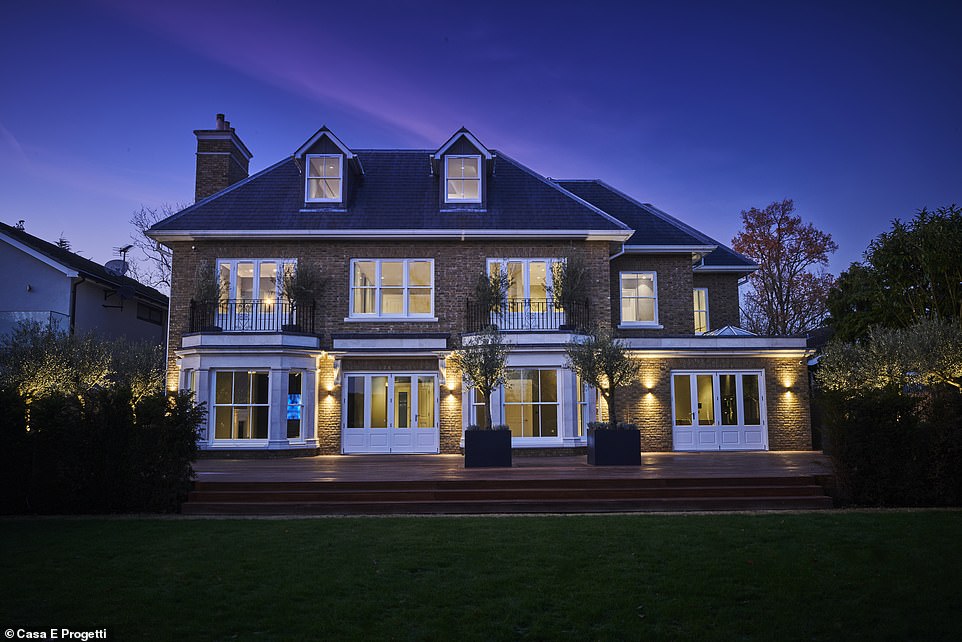 Several houses in Arkley were occupied by MI6 factions during World War II, where officers would be gathering intelligence on the German side. Pictured: the new house from outside

The basement houses the entertainment facilities of the stunning home, with a Dolby Atmos cinema room with a cocktail bar and a games’ room.

There us also a private spa with an indoor pool, separate gymnasium, a steam room, and a changing room.

On the first floor, the master bedroom suite spans the rear of the house, with a bedroom opening to a private balcony, a walk-in closet.

The bathroom has a free-standing bathtub on a marble plinth as well as its own balcony. 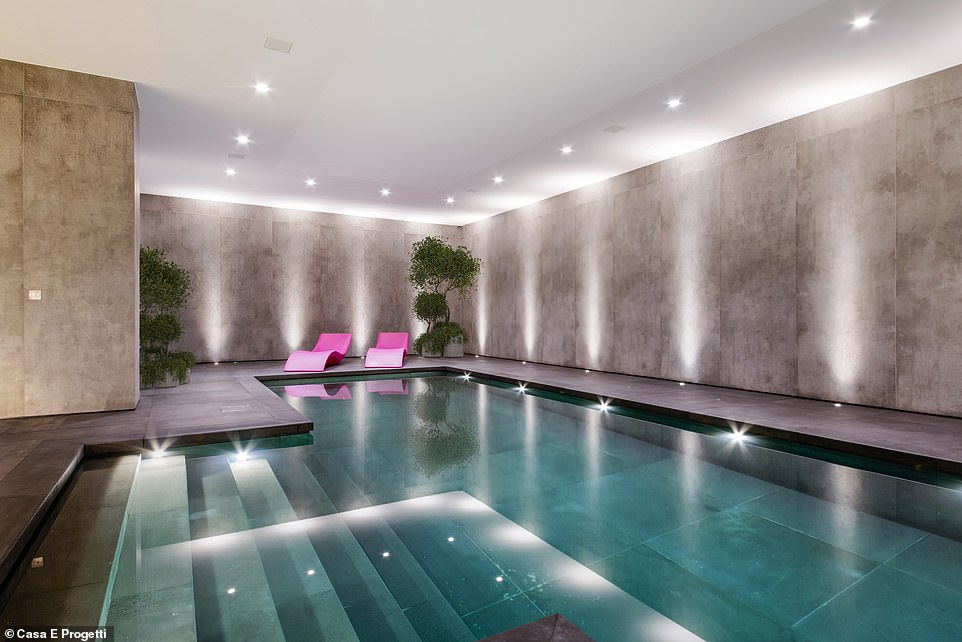 The beautiful pool in the new house is equipped with mood lighting and has a deck for total relaxation. There is also a changing room with a shower

Three other double bedroom suites and their en-suites are located on the same floor.

The final guest bed-room as well as the house’s panic room are located on the top floor.

There is underfloor heating and mood lighting throughout the smart home, and all bathrooms were integrated with waterproof TV.

The property is surrounded by a lush garden landscaped by Chelsea Garden Show Gold Award Winner Luciano Giubbilei, and is complete with a double garage that can accommodate several luxury cars with additional parking for guests. 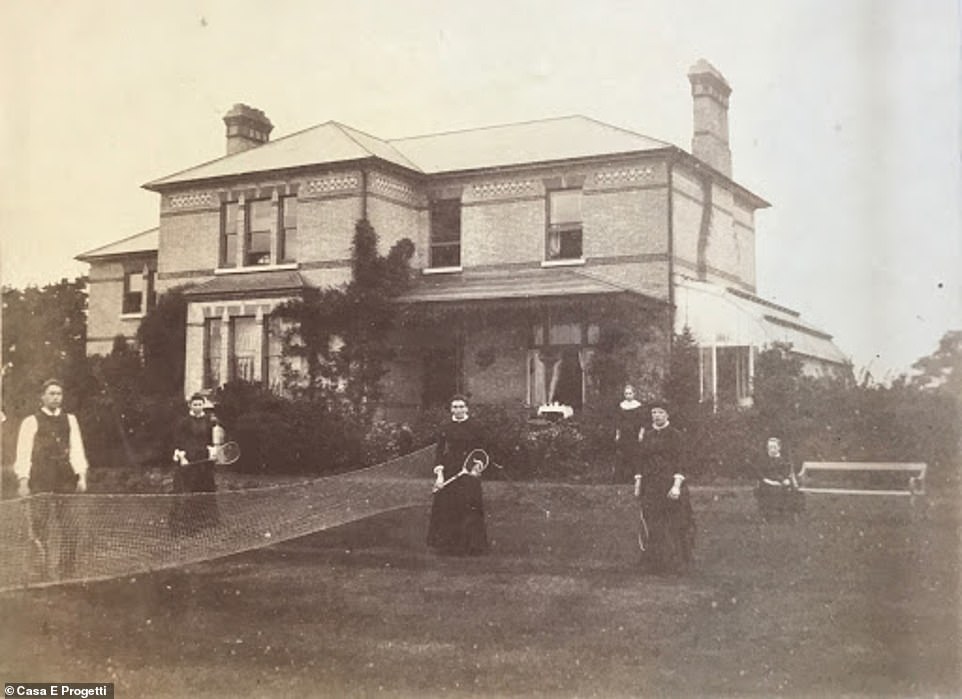 The original villa before it was requisitioned by the government during the second World War, with residents enjoying a game of badminton at the turn of the century