Remember last April, when the world went into lockdown to deal with an out-of-control pandemic? That’s when John David Washington decided to leave the Los Angeles family bubble he shared with parents Denzel and Pauletta Washington to shoot a new movie. 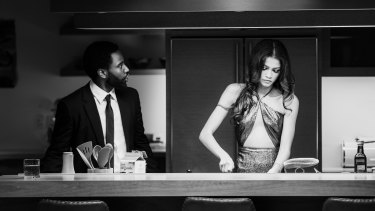 “That thought crossed my mind,” says Washington, 36, during a Zoom call. “But in the most positive way. Like it was crazy that I was finally going to break up the routine. Finally, I was able to do something that I love – shooting a movie, even if I wasn’t sure what it was going to be like.”

The resulting film is a showcase, a $US2.5 million ($3.2 million) independent drama purchased by Netflix for a reported (and astounding) $30 million. Malcolm & Marie serves as a model of art overcoming pandemic, shot entirely with Washington and Zendaya in and around the architecturally stunning Caterpillar House in the remote hills of Carmel, California’s Santa Lucia Preserve.

No one was allowed to leave the property during the six-week shoot with strict COVID-19 protocols. He bonded instantly with his co-star over their mutual love of Beyonce (“I knew we’d get along after that”) during hikes in the the nearby hills and masked rehearsals in an outdoor parking lot.

“We even did a camera test outside in that parking lot,” says Washington. “It was a new wave of independent filmmaking.”

The entire cast and crew multitasked to make the film in uniquely challenging conditions. Zendaya brought many of her own glam Marie outfits; Washington used his own iPhone. His executive producer sister Katia worked as set transport, safety warden and even emergency tailor. She helped fit Washington’s Prada suit, as costume designer Samantha McMillen gave directions over a Zoom call.

“That was a new experience,” says Washington with a laugh. “But it fit perfectly and I loved that suit. It really was all hands on deck.”

The drama follows filmmaker Malcolm and his girlfriend Marie for an evening after they return from his triumphant movie premiere. The two fight, make up, and fight again as their relationship is laid emotionally bare.

The film opens with former NFL player Washington joyously dancing to James Brown’s Down and Out in New York City, to show Malcolm’s excitement about the successful premiere. Washington repeated the moves over three days as Levinson reworked the shot. 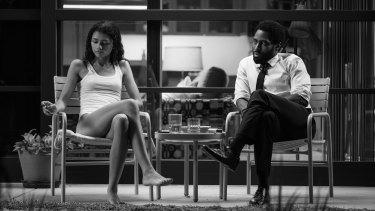 “We would move on, do other scenes. But we would always come back. [Levinson] would be like, ‘I got an idea now,’ ” says Washington, who tapped into his own feeling of exhilaration, receiving a rapturous standing ovation for BlacKkKlansman at the 2018 Cannes Film Festival. “I could relate to that moment of celebration. That high. It’s hard to explain. It’s just a feeling. Joy, that relief. That it worked.”

“In the famous words of the In Living Color character, ‘Hated it,’ ” says Washington. “I hate intimate scenes, kissing scenes, lovemaking. All of that stuff. I’m so awkward, I’m so uncomfortable with it.”

But he worked through it with Zendaya and Levinson. “You do what you gotta do. It’s important to have that for the characters because of what this devolves into.”

Critics have carped about the real-life age gap between the onscreen couple: Zendaya, 24, is a dozen years younger than Washington. He gives props to his more-seasoned co-star, who won a 2020 Emmy playing high schooler Rue on Euphoria.

“She is more experienced, more mature in this industry than I am. She’s teaching me stuff. I’m the novice here. I’m the rookie,” says Washington. “I had to shut up and listen because she knows what she’s talking about. She really is my senior.”

Film critics have been tough on Malcolm & Marie, which was noticeably absent from Golden Globe nominations and carries a saggy 59 per cent positive rating on review site Rotten Tomatoes. While Malcolm storms onscreen about even favourable reviews, Washington insists that’s not him. He avoids all reviews, good or bad.

“I’m too sensitive to read that stuff,” he says.

Malcolm & Marie has already triumphed in his eyes. Washington, a producer on the project, says he put down his own cash to keep the film independent.

“Credit cards, cheques, all that. I did everything I could with it. I literally invested in myself and everybody else. We all did. We got to tell the story we wanted to tell,” says Washington. “So I’m proud. I’ve never been so proud of something.”