An untapped grey army of hundreds of thousands of pensioners are willing and able to travel the country and fill acute worker shortages in regional Australia, the farmers and seniors’ lobby says, as they urge the federal government to deliver a cut to their income tax to get them working on farms.

National Farmers Federation president Fiona Simson said there would be a “huge nationwide benefit” from the move, which would encourage seniors to jump in their campers and caravans to earn cash picking fruit on the smaller farms that don’t access labour schemes run by the government. 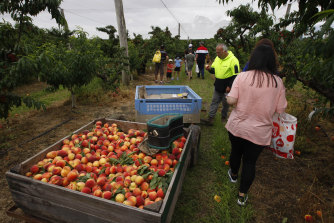 Farmers are backing calls to cut income tax on pensioners earnings to encourage them to re-enter the rural workforce. Credit:Dean Sewell.

The income tax cut for pensioners would also be attractive for residents in regional towns, Simson said, as there is high demand for people with experience in rural industries in a range of farm jobs such as helping milk cows in dairy sheds, livestock handling, general farm maintenance and more.

“Agriculture is a really diverse industry. There’s a demand across the spectrum of industries, from fruit picking right through to processing and retailing,” Simson said.

“The good thing about agriculture and grey nomads is that it allows them to work at their own pace, they can come in, they can do a day here a day there quite often in the peak of the harvest season.”

The Farmers Federation was joined in its push by Council of Small Business Organisations Australia chief executive Alexi Boyd and Mayo MP Rebekha Sharkie, who said she was “not going to give up on this in this parliament”. 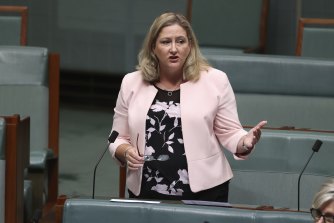 The opt-in scheme would be subject to an income test and only available to pensioners with limited savings.

Pensioners in New Zealand can work without affecting their income and 25 per cent of them earned income from paid work, compared to just 3 per cent in Australia. A parliamentary briefing prepared for the Morrison government found an extra 445,000 people could enter the workforce if tax on pensioners’ earnings was cut.

Under current rules, a single person can earn up to $480 a fortnight without affecting their pension entitlement. When a pensioner earns more than that, their pension is reduced at 50¢ for every dollar in income, or an effective marginal tax rate of 50 per cent. That rate climbs above 60¢ in the dollar as income tax thresholds start to affect their pay.

National Seniors Craig Feldman said cutting the tax on pensioners’ earnings “would be a great incentive” to get more people into the workforce.

“We surveyed about 3000 of our members, which is a pretty good sample and 20 per cent of them came back to us and said yes, we would actually consider going back into the workforce,” Feldman said.

“They need the money. The pension is not exactly a good way of getting through the cost of living crisis, particularly now with higher petrol prices and higher grocery prices.”

“Sometimes they make the best workers because they’re used to working,” he said. “They’re a bit motivated because they want to supplement their income that might be a bit modest.”

Hall said some older workers were experienced in operating machinery, which would allow them to fill some roles on farms beyond fruit picking.

“The freer the access to people who want to work in our industry the better. It’s already a pretty tight market.”

Cherry Hill Orchards owner Stephen Riseborough said he would also welcome pensioners working across his three orchards, but he said the industry was still grappling with the absence of backpackers.

“I don’t know how many pensioners realistically want to go out there and pick fruit,” he said.