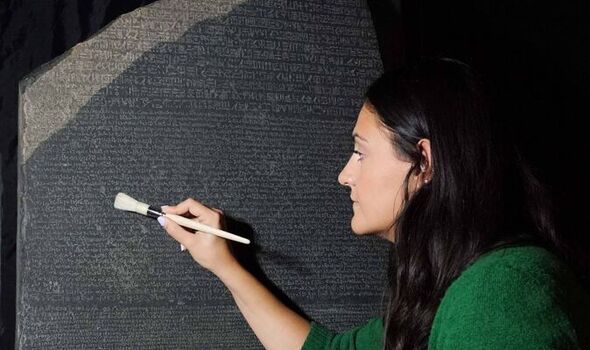 It was 1822 – exactly 100 years before Briton Howard Carter would discover the tomb of King Tutankhamun – and no Western scholar since the end of the Roman Empire had been able to understand ancient Egyptian writings, nor the secrets of one of the world’s oldest civilisations. Jean-François Champollion had just cracked the code, beating his great English rival in the process.

“We are talking about the birth of Egyptology,” said Ilona Regulski, curator of a major new exhibition on hieroglyphs at the British Museum which is celebrating the 200th anniversary of their decipherment and how that breakthrough expanded the modern world’s knowledge of Egyptian history.

“It’s crazy to think you can learn about Ancient Egypt without understanding their language, which is why the story of deciphering hieroglyphs was so important.”

And it is a story packed with intrigue, jealousy, colliding intellects and clashing armies which began in 1799 in the wake of Admiral Nelson’s crushing defeat of Napoleon Bonaparte’s fleet at the Battle of the Nile.

Today the fort, at the end of a pot-holed road from present-day Rashid, east of Alexandria, is being renovated once more, this time in expectation of a tourist invasion.

But as I stand beneath the burning Egyptian sun and study the hieroglyphs still evident in some of the gleaming limestone blocks, it is easy to imagine Bouchard’s excitement at one particular four-foot-long granite-like stone in the crumbling walls with inscriptions not just in hieroglyphs and another unknown script, but also ancient Greek.

The thrice-repeated, grand-looking decree would turn out to be a mundane parish notice on behalf of the second-century BC King of Egypt, Ptolemy V, but Bouchard recognised that Greek could be used to help translate the other colloquial script and the hieroglyphs.

It was subsequently added to the haul of artefacts collected by the army of 160 scholars and 2,000 artists who were a key part of Napoleon’s Egypt expedition.

Indeed, even as the British and Ottoman armies closed in, the French melted down bullets to make new graphite pencils for their scholars, but the eventual British victory in 1801 meant the French had to surrender much of their plunder, including the Rosetta Stone as Bouchard’s tablet became known.

The 1,680lb artefact, named after the place where it was found, eventually arrived in the British Museum and remains a must-see attraction.

The original is at the heart of the new exhibition with a replica in another gallery.

Nevertheless, the French were allowed to keep their drawings, including copies of the stone? and the race to decipher hieroglyphs had begun, with national pride at stake.

Back in France, 11-year-old linguistic child prodigy Champollion, the son of a drunken Grenoble bookshop owner, had taught himself to read, aged five, and at nine had learned Greek and Latin.

Under the care of his scholarly eldest brother Jacques-Joseph, he would learn Hebrew at 12, then study Aramaic, Arabic, Avestan, Chaldean, Chinese, Coptic, Ethiopian, Pahlevi, Persian, ancient Persian and Sanskrit.

But his passion for Egypt had already been fired when Joseph Fourier, one of the senior scholars of Napoleon’s scientific expedition was made the Grenoble prefect and invited the 11-year-old prodigy to discuss ancient Egypt.

Champollion would later say the moment he saw the hieroglyphs Fourier showed him was seminal.

Aged 16, he wrote: “I want to make a profound and continuous study of this ancient nation? Of all the people that I prefer, I admit that none is as close to my heart as the Egyptians.”

He moved from Grenoble to Paris to study and was further encouraged by his teacher, Silvestre de Sacy, the first Frenchman to attempt to decipher the Rosetta Stone.

Academics of the time had thought the hieroglyphs were only ideograms – pictures portraying single ideas – just as a stick man or stick woman picture means “toilet” to us but does not form part of any language.

Champollion tried initially to add to the translation efforts of the middle colloquial script started by the likes of de Sacy and Swedish diplomat Johan Åkerblad but became discouraged and, instead, concentrated on his studies of the Coptic language which he believed was a remnant of ancient Egyptian.

He wrote: “I dream in Coptic? in Egyptian? I am so Coptic that, for fun, I translate into Coptic everything that comes into my head… This is the real way for me to put my pure Egyptian into my head.”

But, in the race to decipherment, he now had a serious rival. The fascination with hieroglyphs had belatedly caught the attention of English scientist Sir Thomas Young.

Described as “‘The last man who knew everything”, the 41-year-old had already made landmark contributions to the fields of mechanics, physiology, linguistics, musical harmony, physics and optics – including the discovery that light travels in waves – before he turned his brilliant mathematical mind to Egyptology as “the amusement of a few of my leisure hours”.

It was Young who made the first major advances in the decoding of the colloquial script on the Rosetta Stone, correctly understanding it was composed of both ideographic and phonetic sounds.

Young and Champollion first became aware of each other’s work in 1814 when Champollion wrote to the Royal Society, of which Young was the secretary, requesting better transcriptions of the Rosetta Stone, arrogantly implying he would be able to more quickly decipher the script if he had better copies.

WhileYoung was used to sharing his work with the scientific community, Champollion regularly dismissed other scholars’ work as “black pudding juice” and failed to credit them for any progress he may have benefited from.

One of those who Young collaborated with was politician and adventurer William Bankes, who, in 1815, brought back an obelisk from Philae which was inscribed with Greek and hieroglyphs and from which he translated the name, Cleopatra. Young shared his work with Silvestre de Sacy who, by then, was no fan of his former pupil.

De Sacy wrote to Young: “If I have one counsel to give you, it is not to communicate too much of your discoveries to Champollion. It could happen that he would then claim priority? I’m afraid that [Champollion’s claims] are nothing more than charlatanism.”

Indeed, when Champollion claimed he had deciphered the name Cleopatra from the Casati Papyrus, denying any knowledge of Bankes’ work on the Philae obelisk, Bankes described him as a “dirty scoundrel”. Neither was the Frenchman averse to using his rivals’ mathematical approach when it suited him.

Thomas Young in his rival’s Since there were 486 Greek words on the Rosetta Stone and had originally been more than the 1,419 hieroglyphs that remained, a single hieroglyph could not represent one idea or word.

But Champollion’s big breakthrough came when an architect friend returned from Egypt with precise drawings of hieroglyphs at the rock-cut temples of Abu Simbel. He noticed many of the inscriptions had cartouches [scroll-effect ovals enclosing the kings’ names] and that many ended with the door lock sign for “S” he recognised from the name Ptolmes [Ptolemy] on the Rosetta Stone.

One such name started with a circle painted red, which he guessed meant the sun, followed by a hieroglyph that looked like “M” and which he guessed related to the birth date mentioned on the Rosetta Stone. It finished with two door lock hieroglyphs.

Using the Coptic for Sun – “Re” – and the Coptic for “give birth” – “Mise” – he came up with the name Ramesses – a Pharaoh well known to ancient authors.

Next, he found a similar-looking cartouche that started with the hieroglyph for an ibis bird, which he knew represented the Egyptian god Thot.

He applied the same logic and came up with Thot-MS-S or Thutmosis, another famous Pharaoh known from ancient texts.

“Champollion discovered that hieroglyphs represented a spoken language, and so are phonetic, and that that had been the case since the beginning of Egyptian history,” explains Egyptologist Ilona Regulski. “That was his big contribution.”

Champollion had worked out how the Egyptians used a mixture of symbols and phonetics, he used ancient King lists and the “Book of the Dead”, which also features in the British Museum exhibition, to work out other symbols, then the Egyptian grammar, tenses and genders.

Many of his contemporaries were critical that he did not provide translations to support his explanations, but Sir Thomas Young, by then the Frenchman’s foremost rival, was magnanimous.

He said: “Mr Champollion, who has been living for these ten years on the Inscription of Rosetta, and who has lately been making some steps in Egyptian literature, which really appear to be gigantic. If he did borrow an English key, the lock was so dreadfully rusty? I should feel nothing but exultation at Mr Champollion’s success.”

In a fit of modesty, Champollion later said: “I hasten to declare the highest esteem that I profess for the person and the work of Dr Young, as well as recognising that he was the first to publish some exact notions about the ancient writings of Egypt? that Dr Young was first to attempt, but without complete success, to give a phonetic value to the hieroglyphs making up the names Ptolemy and Berenice.”

Young died seven years later, aged 55, still asserting the importance of the work he had done which contributed to the Frenchman’s success. Ironically perhaps, Champollion never saw the Rosetta Stone in person – only copies of it – but he got to visit his beloved Egypt in 1828, though his health was already failing and he would die soon after his return, aged just 41.

Of his visit to Thebes, he recalled seeing, “The greatest and most marvellous thing that the hand of man has created. I ran like a madman between colossi, obelisks and colonnades who could only have been conceived by the most grandiose imagination.”

Today, thanks to the endeavors of these two scholars, rivals though they were, our understanding of the ancient world is manifestly more complete.