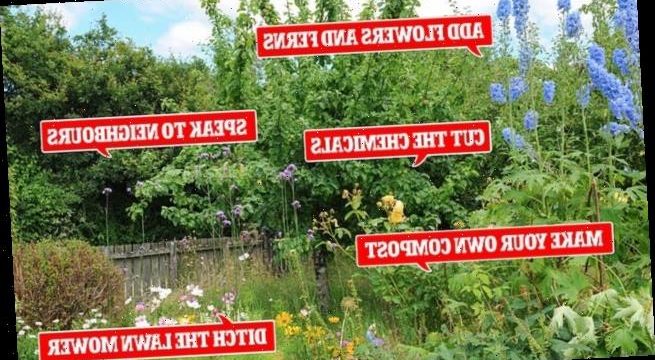 Would YOU like a garden like the Queen? As a new book reveals parts of Buckingham Palace garden have been ‘rewilded’, experts explain how you can do it at home – from ditching the lawn mower to planting ferns

As a new book reveals the Queen has been ‘rewilding’ parts of her Buckingham Palace garden, experts have unveiled how amateur gardeners can achieve the oasis for wildlife at home.

Buckingham Palace: A Royal Garden charts a year in the life of the city oasis, with author Claire Masset revealing an island in the centre of the outdoor space has been left largely untouched for decades.

The author penned: ‘Even during Queen Victoria’s time the island looked after differently from the rest of the garden…the island is now a rich and finely balanced ecosystem: an oasis within an oasis.’

Experts told FEMAIL by encouraging a ‘slightly more laissez-fair style’ in your garden, you can create habitats for wildlife and revealed ditching the lawn-mower and making your own compost was a good place to start. 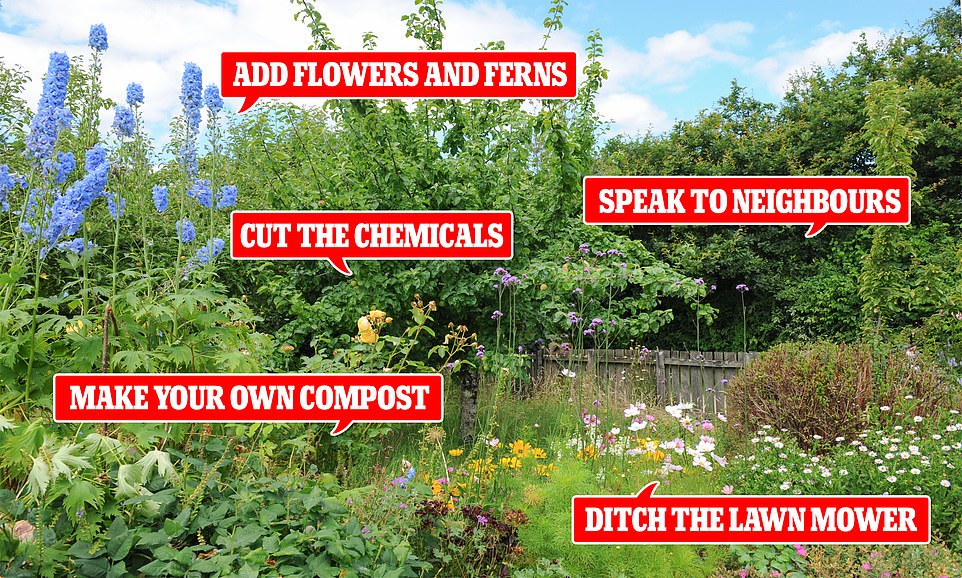 As a new book reveals the Queen has been ‘rewilding’ parts of her Buckingham Palace garden, experts have unveiled (pictured) how amateur gardeners can achieve the oasis for wildlife at home

Expert Heather Barrigan, from My Job Quote, explained a quick and easy way to begin rewilding the space could be to stop cutting the lawn.

She revealed: ‘One of the best ways to “rewild” your garden is to simply stop mowing the grass, which will help create rapid growth.

‘It will also allow you to add length to your grass, attracting insects and other small creatures for a true wild garden feel.

‘If stopping mowing completely is too drastic, you should start to cut down and only cut the grass once a month or even twice in the summer.’

Cut out the chemicals

Heather revealed that cutting out the chemicals is another quick and easy way to start the rewilding process.

She explained: ‘To ease yourself into the wild garden trend without making your garden look unreal, you should start slow.

‘I would advise laying off the chemicals, plant more perennials and allow your lawn to grow.

‘Cutting out chemicals will allow your garden to breathe and help you grow healthier, more organic food if you have a vegetable garden.’

Meanwhile Michael Perry, Rowse Honey’s gardening expert, explained: ‘If you have persistent aphid (small sap-sucking insects) problems, and you would prefer to eradicate them, then you’ll find soapy water as an easy option. Mix up a weak solution and use it every 2 weeks on your affected plants using a sprayer.

‘Another cheeky mix, this time for blackspot on roses… mix up 1 tablespoon of baking soda, 1 tablespoon of vegetable oil into a gallon water and then spray both sides of the leaves.

Rewilding aims to return land to a more natural state – by allowing nature to take its course.

Activists and plans call for rewilding to be encouraged in order to save essential areas and species.

Their site reads: ‘We can give it a helping hand by creating the right conditions – by removing dykes and dams to free up rivers, by stopping active management of wildlife populations, by allowing natural forest regeneration, and by reintroducing species that have disappeared as a result of man’s actions.

‘Then we should step back and let nature manage itself.’

Plans include introducing long-gone or valuable keystone species to a region and preserving natural order.

‘Or, how about dissuading unwanted pests from your garden? You can do this with other plants…! The scents of Basil, Marigolds (which are super bee-friendly) and Garlic planted near your prized plants and vegetables will deter aphids and the like.’

Meanwhile Michael explained: ‘For wonderful bee-friendly habitats choose nectar- and pollen-rich flowers- which tend to be brightly coloured, and simple in structure so just as (visually) appealing for you too.

‘Pay particular attention to the blooms you choose to plant for both the height of summer when there’s more competition for nectar and pollen, and winter when sources can be scarce.

‘Bee hotels are also great for boosting bee diversity in your garden. You’ll attract solitary species, which lay their eggs in the hollow cavities of the ‘hotel’, leaving a food supply for the larvae to eat. Position in full sun and away from predators.

‘The more habitats you offer birds, hedgehogs and small mammals, the less slugs, snails and aphids you’ll have on your plants. You know it make sense!

…And add plenty of ferns

Heather said that those living somewhere with a more limited outdoor space, like a balcony, could still look to rewild the space.

She revealed: ‘If you do not have a garden, you could always incorporate “rewilding” on your balcony or small outdoor space.

‘All you need is plenty of flowers, such as hydrangeas and ferns, which overlap to create a jungle-like aesthetic.

‘If you have space, you can also add a small water feature to truly embody the wild garden.’

Michael explained: ‘Try to reduce the use of plastic in your garden by re-using pots and containers, and instead explore different materials for times you’d usually use plastic.

‘Old tights and panty hose are ideal for tying in plants, it’s soft and flexible and won’t harm the plants.

‘Discarded packing chips also make excellent drainage for pots, add a layer at the base instead of gravel.

‘Some people also find that using a (clean) nappy in your baskets works nicely, as it soaks up the water, releasing it slowly into the compost. This can be a godsend, especially as hanging baskets dry out quicker than most containers!

‘And, here’s a way to tackle weeds without nasty chemicals, did you know that a mix of 1-part gin, 1-part white vinegar and 8parts water will kill weeds almost instantly? It’s important to know that the neonicotinoids in most pesticides are extremely harmful to bees, specifically damaging their gut bacteria and can make them more prone to infection.

Make your own compost

Michael explained: ‘It’s worthwhile putting aside an area of your garden for composting, you can either buy a specialist container or construct your own.

‘Add all manner of things to your compost heap, and the result will be full of nutrients!

‘These things might include lawn clippings, old egg boxes, shredded newspaper, hedge trimmings and of course vegetable scraps from the kitchen!

‘The compost takes around a year to form and makes the perfect top mulch for your border plants or mixing into pots of patio plants.’

Heather revealed: ‘Before going wild with your garden, you may want to speak to your neighbours, especially if you share a front garden or adjoining fence.

‘You could also encourage them to get involved by even opening up your garden boundaries to create a safe space for wildlife.

‘This could involve adding feeding stations and water features to attract birds and small insects.’

Buckingham Palace boasts a 39-acre garden containing wildflower meadows, a rose garden and a three-and-a-half acre lake – all of which are revealed in a new behind-the-scenes book.

The book, which costs £14.95 and is available on Royal Collection Trust’s website, details the island has been left to go wild amidst the rest of the pristine garden. 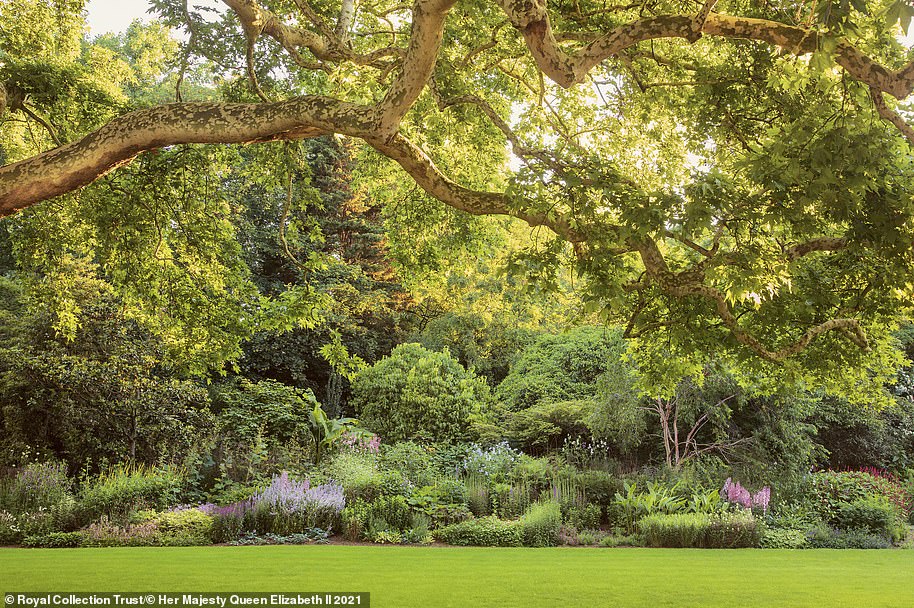 She penned: ‘Wilder, shadier and generally more overgrown, it acted as a refuge for nesting birds.

‘This remains true today. In fact, the island is now a rich and finely balanced ecosystem: an oasis within an oasis.’

To maintain the natural environment, the gardeners have ventured onto the island as little as possible.

This has allowed birds and other wildlife to remain largely undisturbed, oblivious to the bustle of royal life just a stone’s throw away. 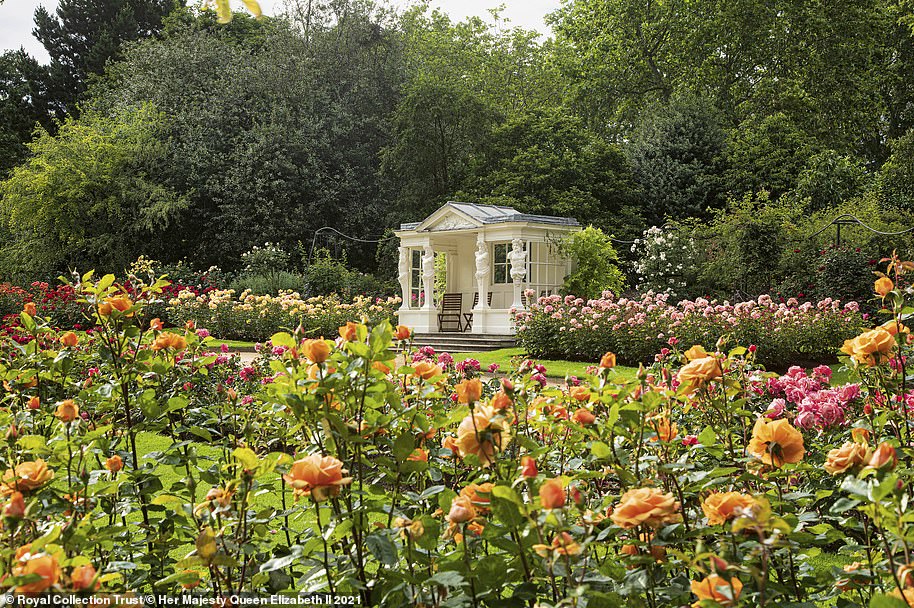 Some 24,000 guests usually traipse over the grass in the summer during the Queen’s three garden parties, leaving the lawn in need of repair. Pictured: Buckingham Palace’s rose garden, as revealed in the new book

The meadows, lakeside shrubs, and dense trees offer many different rewilded habitats for a microclimate on the island.

Being surrounded by water creates a more humid environment than the rest of the garden, encouraging different flora and fauna.

Claire penned: ‘Recent surveys on the island have revealed unexpected and exciting finds, including two rare beetles (Longitarsus ferrugineus and Clitostethus arcuatus), as well as a fungus (Cristinia coprophila) not recorded here since 1938.’ 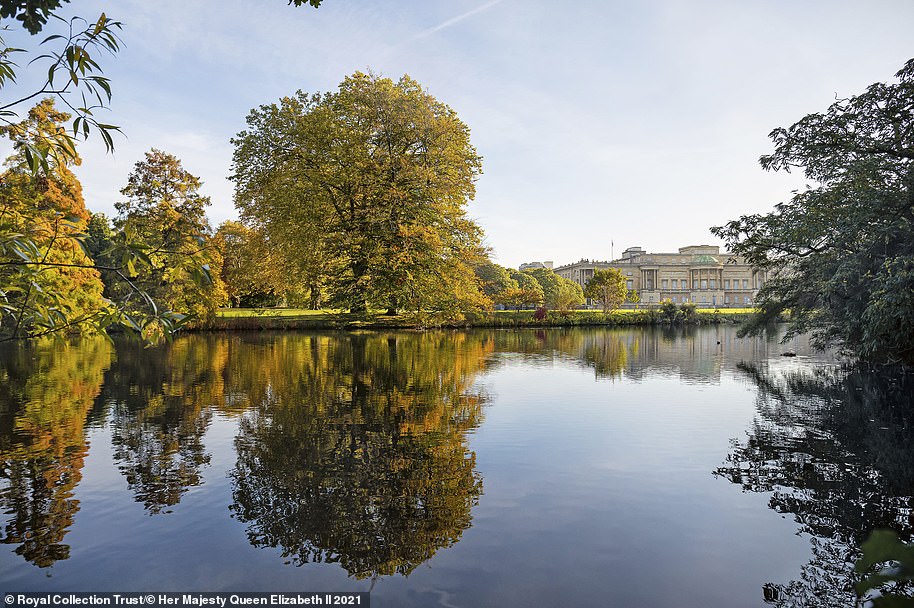 The lake features a waterfall and a secluded island which acts as a haven for wildlife, including five beehives. Pictured: The palace as viewed from the other side of the 3.5acre lake