The Australian Electoral Commissioner says anyone who is COVID-positive can now vote over the phone, but warned telephone queues might be long and urged those already registered to use the emergency provision to vote early.

Previously, people who tested positive before 6pm on Tuesday had until Wednesday to apply for a postal vote, and those who had not would be excluded from phone voting. 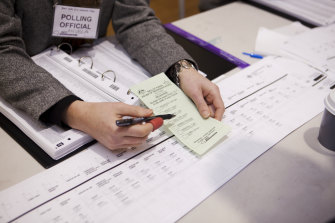 People with COVID-19 can vote over the phone -but have been urged to vote early, and be patient.

It sparked independent candidate Monique Ryan to launch a legal challenge as the policy could affect hundreds of voters in the electorate of Kooyong alone. Australia has been averaging more than 10,000 new cases a day over the last week.

In interviews on Friday morning, Commissioner Tom Rogers said anyone who tested positive from 6pm last Friday can now access telephone voting after the system was tested on Thursday night.

“We are very conscious of trying to extend the vote to as many people as possible, and in fact, the entire telephone voting thing was something that the AEC advocated for to start,” he said.

Rogers urged people to jump on the electoral commission website to register, and for people who have already registered to use phone voting, he urged people to vote as early as possible.

“Please, if you’ve got the time, jump on it today. Don’t leave it all tomorrow. This is an emergency measure,” he said.

“We will be working to make sure that the queues are as smooth as they can be, but I’m just pointing out to everyone, this is a one-off, emergency project, and it will be a lumpy experience.”

Telephone voting requires an electoral commission staffer to read out the ballot paper to prospective voters.

“Think about that for a minute – the Senate ballot paper in New South Wales has a large number of candidates. That takes time,” Rogers said.

There won’t be the capacity for people to be called back if there are long phone queues, but Rogers said there are a few things people could do to help.

“When you register you can actually jump online and have a look at the ballot papers. And we’d ask you to do that so that you actually know what you’d like to do when you phone us, that will really assist everyone,” he said.

“If you’re going to use the telephone voting service, think about everybody else. Jump on, do your research and be ready to go, that will really assist.”

Millions of Australians have already voted ahead of polling day on Saturday. Rogers said Thursday was the largest pre-poll day, with about 750,000 votes cast at polling stations across the country.

So far 7.3 million people have either pre-polled or applied for postal votes, he said.

Speaking to 6PR on Friday morning, Prime Minister Scott Morrison said the logistics had been worked through to allow more people to vote over the phone.

“We’ve got a very, very good electoral commission in Australia, and they’ve worked the problem and they’ve come forward with a solution, and we’re very happy to support it,” he said.

Earlier on Friday morning, Ryan said the legal challenge was being launched because some people in her electorate were “really distressed” by not being able to vote.

“I and my team felt that someone had to stand up and do something about this, that we could not let it go through to the keeper,” she said on ABC RN Breakfast.

Ryan confirmed the legal bid when speaking to more than 100 supporters at her campaign office on Thursday, saying it could affect a significant number of Kooyong residents and have a material effect in the event of a tight outcome.

The Kooyong candidate said they had received $126,000 in donations within a few hours for the court action, with more than 1200 signatures received on her petition.