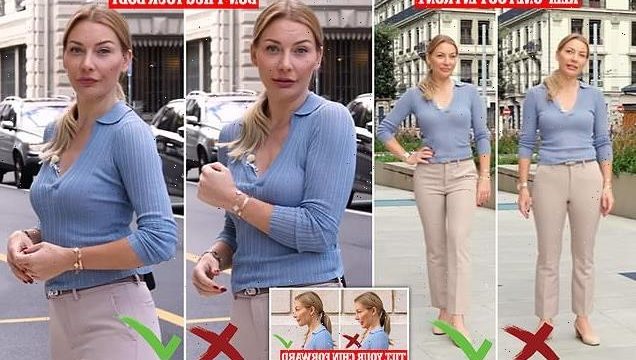 Who needs Photoshop! Elegance coach reveals how to ALWAYS look good in pictures – from ‘smizing’ and tilting your chin forward to holding your arms away from your body

Anna Bey, who splits her time between London and Geneva, took to YouTube to explain how anyone can improve their pictures – with her suggestions including ‘smizing’ not smiling and never pressing your arms against your body.

The expert boasts over 1.4million subscribers on YouTube, where she shares self-help videos for infiltrating high society, having good etiquette in posh settings, and living a ‘feminine lifestyle’.

Here, FEMAIL reveals her top tips for when you’re posing for photos – from keeping your fingers outside your pockets to tilting your legs when sitting down…

DON’T PRESS YOUR ARMS AGAINST YOUR BODY 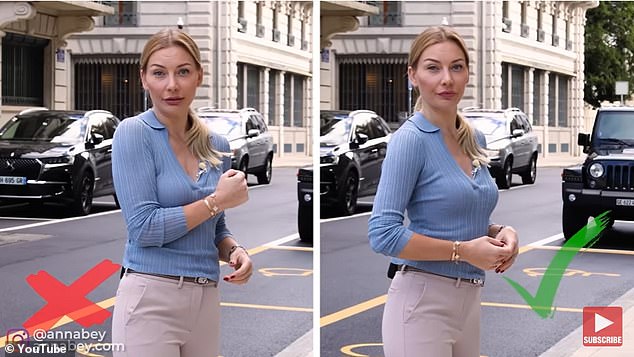 Anna (pictured) noted the importance of placing your arms in a flattering position – insisting that when facing to the side, with your one arm towards the camera, you should never press it against your body

Anna firstly suggested placing your hands on your hips to accentuate your waist, especially when wearing bulky clothes.

KEEP YOUR FINGERS OUTSIDE YOUR POCKETS

Anna said: ‘Don’t place your hands inside your pockets fully. A common trick that models do is that they place hands outside like this instead [keeping their fingers on the outside of their outfit].

‘And this is because this looks more flattering versus [keeping your whole hand inside your pocket which] just cuts off the hand and doesn’t look good in pictures.’

She then noted the importance of placing your arms in a flattering position – insisting that when facing to the side, with your one arm towards the camera, you should never press it against your body.

She said: ‘A common mistake that people make is that they press this upper arm against their body, making this arm look really thick, although it’s not really that thick.

‘Always pay attention if you are in this position. So just don’t press, instead hold it up a little bit, even if it doesn’t feel natural.’

PLACE YOUR ARMS ALONG YOUR THIGH

Commenting further on where best to place your hands when posing for a photo, Anna said: ‘I personally like to just place my arms along my body.

‘I do like to place one on my hip, on my waist, but I also like to just lay my arm a little bit on my thigh, naturally.’

She added that crossing your arms over your chest is not ‘always a good pose to do’ because it looks like you’re protecting yourself from someone.

‘You look a bit defensive in this pose, body language wise,’ said Anna. ‘But also if you think about it this way, because this arm becomes the closest in distance to the camera, it ends up looking bigger.’ 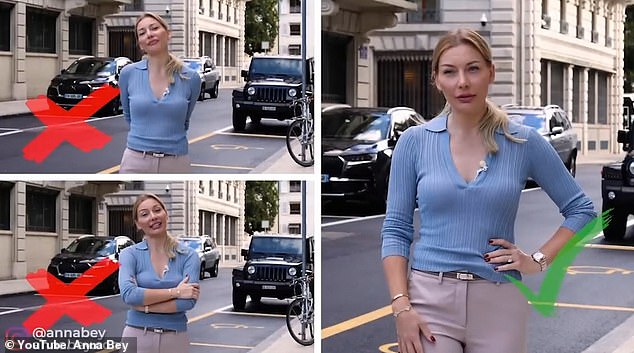 Commenting further on where best to place your hands when posing for a photo, Anna (pictured) said she ‘personally likes to just place my arms along my body’

PLACE YOUR FOOT IN FRONT OF YOU

In one of her tips to help find a flattering pose, Anna suggested angling your body instead of facing the camera head on.

‘Whenever you place one foot in front of you, you end up looking taller and of course, also more slender,’ said the elegance coach.

‘Just lightly, naturally place your foot a little bit in front of you. I also like to do a little accentuation of my hip and push my hip out.’ 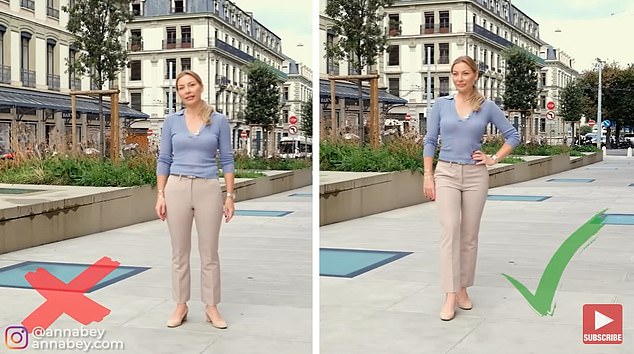 ‘Classy women are very much aware about their chin and their neck whenever they take pictures,’ revealed the elegance coach.

‘Whenever we take a picture, we are extending our chin forward and we are tilting it slightly. And always think about elongating your neck. You want to really roll back your shoulders.

‘You want to have great posture and you want to really extend your neck, making it longer. And you also want to put that chin forward a little bit.’

Anna added that elegant women would avoid wearing turtlenecks when posing for photographs.

‘If you know that you’re going to have your picture taken a lot one day, or let’s say you’re going to pose for a portrait, don’t wear turtlenecks because that’s going to cut you off and make you look compact.

‘Always have something with a little bit of space [such as a V-neck] to make you look the best.’ 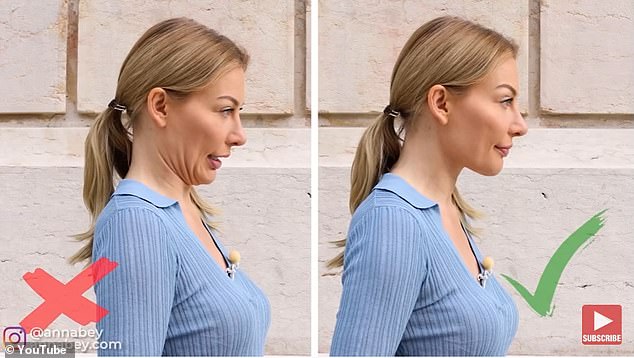 ‘Classy women are very much aware about their chin and their neck whenever they take pictures,’ revealed the elegance coach (pictured)

TAKE AN IMAGE FROM SLIGHTLY BELOW

Sharing her camera angle rules, Anna said: ‘Nobody looks really good when you are taking images from above. It’s not really natural looking and it makes you look shorter and it’s not necessarily flattering.

‘The second one is when you take it from far below where, okay, you might look a little bit tall, but it looks too unnatural.

‘My suggestion is for ladies who are petite or for ladies who want to appear taller, a little bit from below is going to make your legs look longer and you’re gonna look taller as a result.

‘Additionally, make sure that the camera is also not too tilted backward or forward. Some people have a bad habit of tilting, let’s say the smartphone, when they take a picture of you.

‘And I personally don’t like it. I like it to be straight because that gives more of a natural look.’ 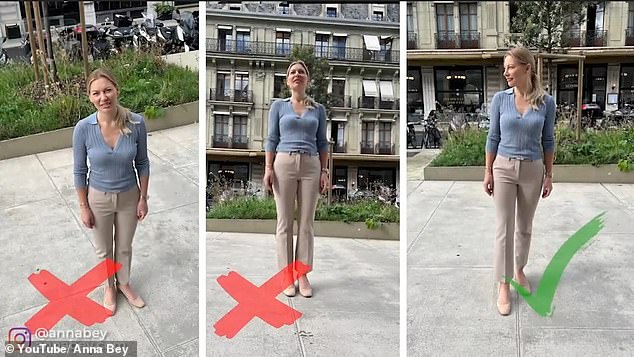 Sharing her camera angle rules, Anna (pictured) said ‘nobody looks really good’ when photographs are taken from above

TILT YOUR LEGS WHEN SITTING DOWN

‘Ladies, pay attention when you sit down because when you have your knees facing toward the camera, straight, it’s actually not flattering,’ insisted the elegance coach.

She claimed the focus ‘will be on your knee points and they are actually going to look bigger.’

‘You should always tilt them a little bit so that they are diagonally,’ said Anna, before explaining that you should also have one of your legs a little bit forward ‘because it’s going to give an optical illusion of longer legs.’ 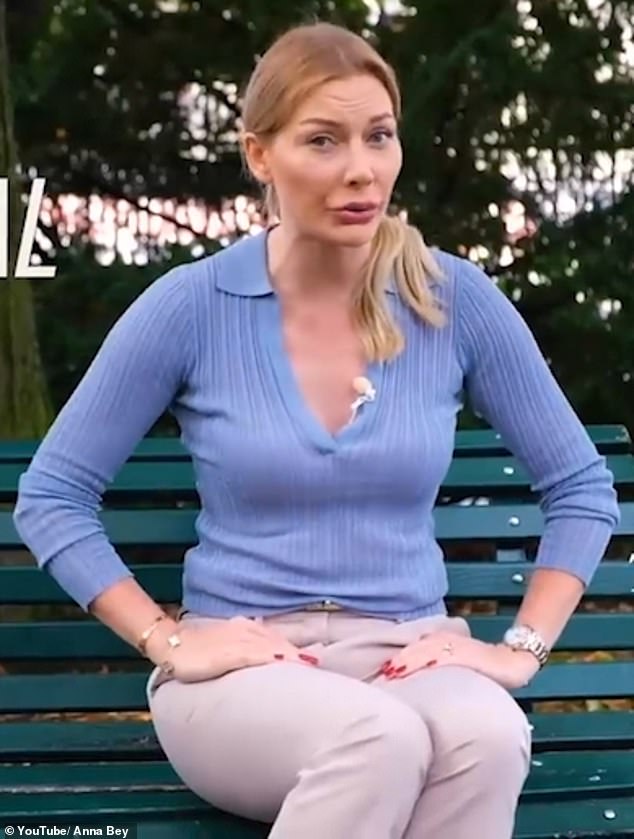 For those that don’t like smiling on camera – perhaps because of their teeth or because they feel it ‘widens their face’ – Anna has a solution.

She said: ‘You can smize, you just lift your lips a little bit.’

However, the elegance coach warned against the ‘sexy face’ – showing it to be a pout, explaining: ‘If you have to do it, do it in a situation where that makes sense.’

‘But we see a lot, especially on social media, of the sexy face. Ladies, do the sexy face mindfully. It’s not always suitable to do it.

‘The sexy face only has a few occasions and that is when you send a cute picture to someone you want to flirt with a little bit.’ 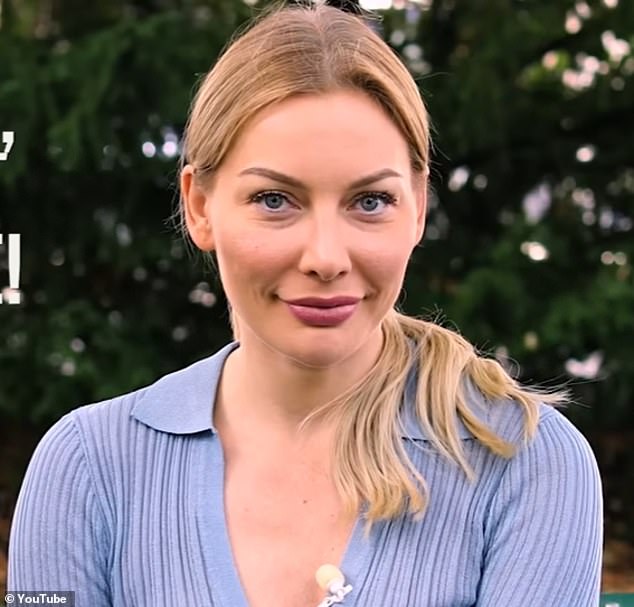