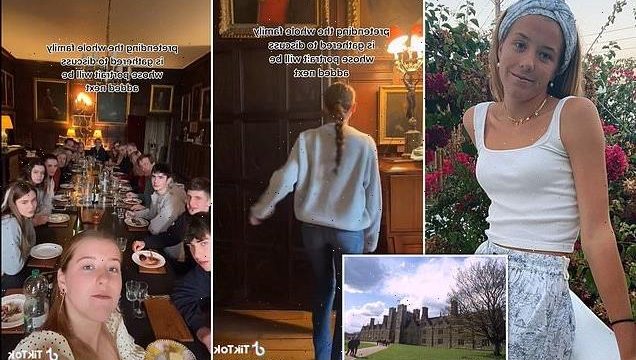 The daughter of 7th Baron Sackville has shown a rare glimpse inside the living quarters of Knole house – the 567-year-old Archbishop’s palace in Kent that Henry VIII once owned and used as a hunting ground.

Edie Sackville West, 18, shared a video of her family to TikTok, showing them eating at an extended dining table covered in portraits.

The student, who studies at Vanderbilt University in the US,  is the daughter Robert Sackville-West, 7th Baron Sackville, the guardian of Knole house and his wife Margot MacAndrew.

In a clip that’s been viewed more than two million times, Edie films herself at the end of a grand dining table before panning on all her family.

All dressed casually in jeans and jumpers, in a scene parodying hit TV show Succession, she jokes: ‘pretending the whole family is gathered to discuss whose portrait will be added next’.

Around the table is dozens of oil portraits of former occupants of the house – including Henry VII.

Knole, which is owned by the National Trust and with half the rooms leased back to the Sackville family, was build in the 1400s from an even older manor house, then owned by the Archbishops of Canterbury.

The house, which sits in 1000 acres of park land is one of Britain’s largest houses and has 365 rooms, 52 staircases, 12 entrances and seven courtyards.

During the Tudor dynasty in came into royal possession, as Henry VII hunted there. After his divorce from Catherine of Aragon, Knole housed his daughter Mary I, and later her sister Elizabeth I is sad to have visited.

In 1603, Thomas Sackville – a member of the prominent Sackville family –  made it the aristocratic treasure house, creating showrooms designed to impress visitors and to display the Sackville family’s wealth and status.

The Sackville family still live there today, after more than 400 years of continued occupancy.

Perhaps the most famous former resident is Vita Sackville-West, the prolific diarist and author and inspiration for her lover Virginia Woolf’s Orlando: A Biography. 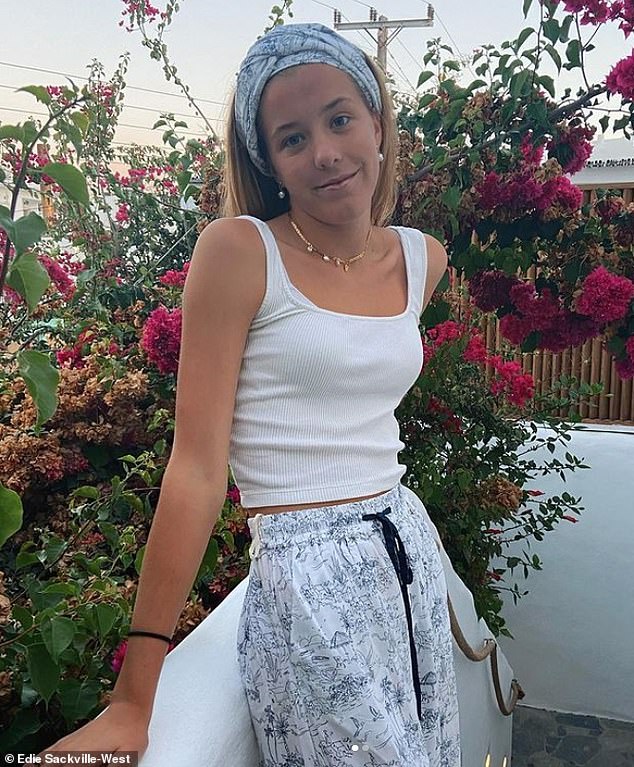 Edie Sackville-West, 18, shared a video of her family to TikTok , showing them eating at an extended dining table covered in portraits.

Born at Knole in 1892, she grew up there, an only child of Victoria and Lionel, 3rd Baron Sackville.

But she never inherited it due to male-favoured primogeniture laws meaning the home instead went to her uncle Charles. It was during his term that the house was handed to the National Trust with an endowment.

In 1913, Vita married Harold Nicolson, an MP. although they were both said to be gay and have numerous affairs.

Vita, who is best known for writing The Edwardians – a reflection of her own childhood experience – had two bridesmaids, one of whom she was having an affair with at the time. The other, her new husband’s sister, she would have a long affair with 15 years later.

In later years, she became well-known as a horticulturalist, creating beautiful gardens at Sissinghurst, her final home in Kent, which are visited to this day by a respectful and admiring public.

Her other lovers included Rosamund Grosvenor, a relative of the Duke of Westminster, who often stayed in the room next to Vita’s at Knole, where — in Vita’s words — they lived ‘on terms of the greatest possible intimacy’. 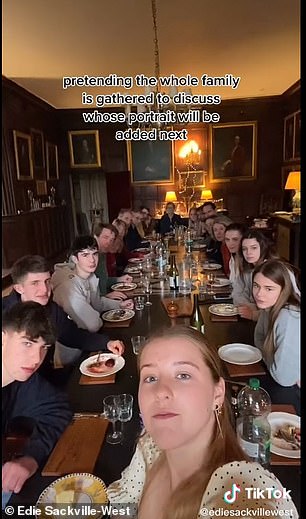 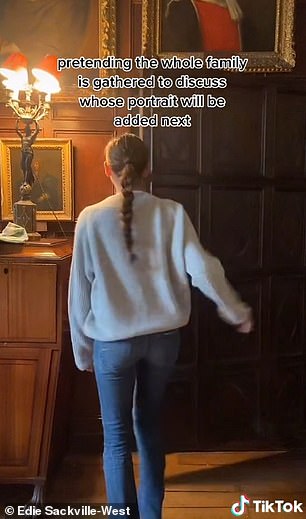 In a clip that’s been viewed more than two million times, Edie films herself at the end of a grand dining table before panning on all her family. All dressed casually in jeans and jumpers, in a scene parodying hit TV show Succession, she jokes: ‘pretending the whole family is gathered to discuss whose portrait will be added next’. 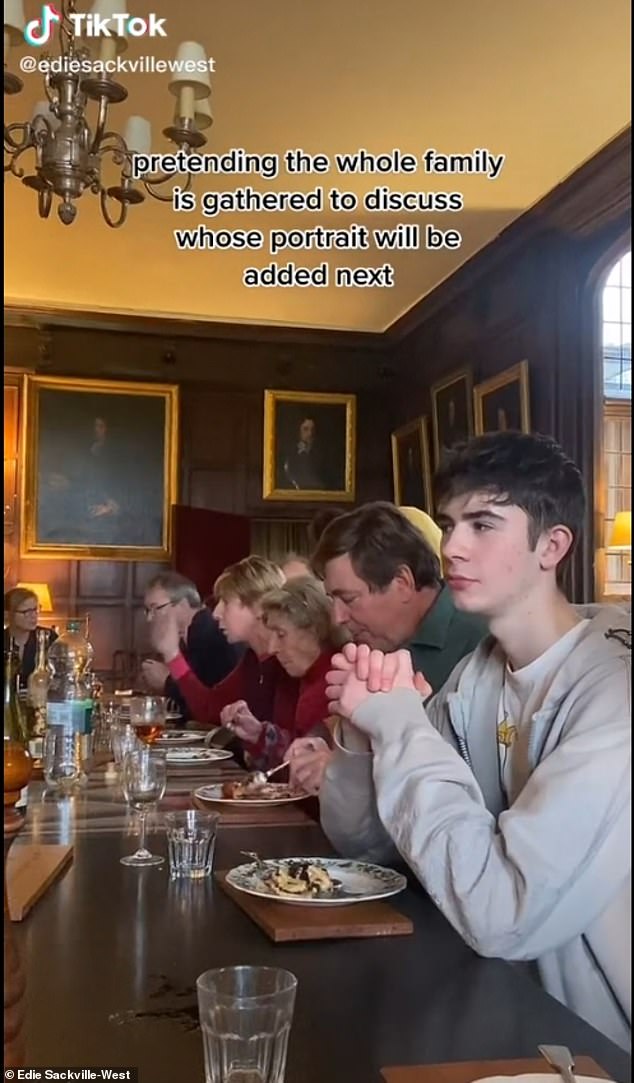 Although she later denied they made love, she admitted that she was so overwhelmingly in love with Rosamund that ‘passion . . . used to make my head swim sometimes’.

Far more dangerous, however, was Vita’s schoolfriend Violet. Already touched by scandal — she was the daughter of Alice Keppel, the mistress of Edward VII — she nursed such a burning passion for Vita that she begged her never to marry.

But most famously, it was over dinner with a mutual acquaintance in December 1922 that Vita met the woman with whom her name would be inextricably linked in literary history: Virginia Woolf.

Of the two of them, Vita was the better-known and more commercially successful author, but it was 40-year-old Virginia — proprietor with her husband Leonard of the Hogarth Press — who had the reputation for cleverness. 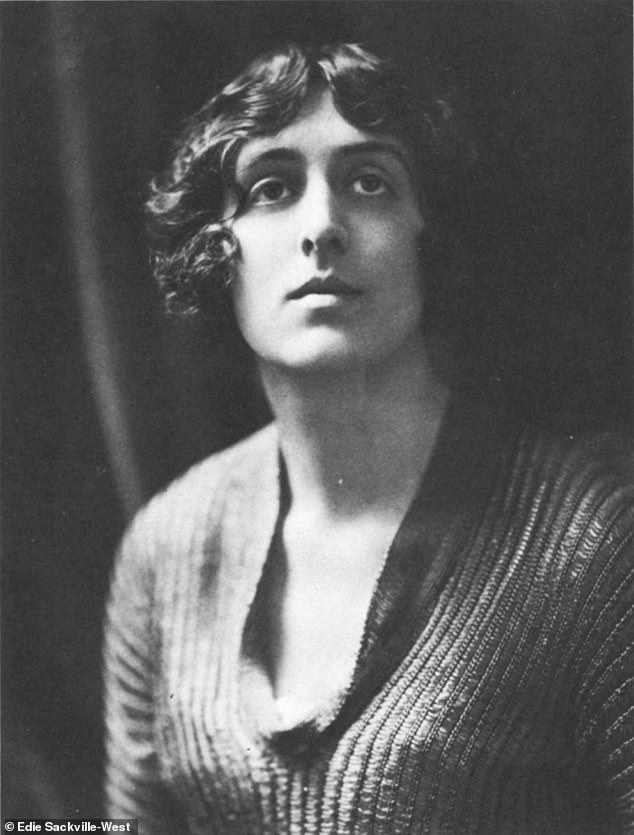 Perhaps the most famous former resident is Vita Sackville-West, the prolific diarist and author and inspiration for her lover Virginia Woolf’s Orlando: A Biography.

In December 1925, while Virginia was visiting Vita at Long Barn, something clearly ignited. Subsequently Vita referred in a letter to ‘the explosion which happened on the sofa in my room here when you behaved so disgracefully and acquired me for ever’.

Virginia described it as ‘the night you were snared, that winter, at Long Barn’.

Vita, however, was aware that a full-scale sexual awakening might put her new lover’s fragile mental stability at risk. The following year, Vita told Harold: ‘I have gone to bed with her (twice), but that’s all . . . I am scared to death of arousing physical feelings, because of the madness.’ 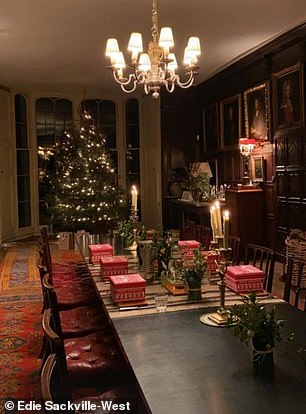 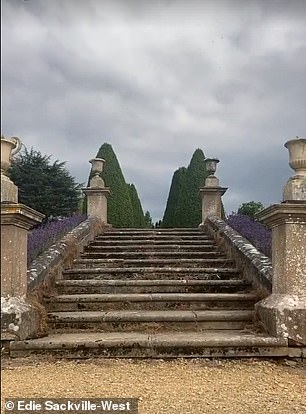 Edie and her siblings often share photos of the home, including the dining room (left) and outdoor stairs (rights)

Virginia’s acclaimed novel Orlando, which features a hero who keeps changing sex, was clearly based on her Vita — indeed, Vita’s son Nigel later described it as an extended love letter to his mother. It was also Virginia’s way of possessing at least a part of her sexually fascinating friend, if only on paper.

The current owners are much more private, however Robert Bertrand Sackville-West, 63, has written about Knole and his family.

He inherited the title in March 2004 on the death of his uncle, who had no sons and the family now live in the house’s south wing.

Speaking previously to Kent Life in 2011, he explained: When I was nine my parents moved into the north wing , so from nine until I went to university, Knole was home.

‘One of the advantages of spending my childhood in another part of the house is that when we moved into this part I had no emotional attachment to any particular rooms, so it allowed us carte blanche to do what we wanted – within the restrictions of our ownership.’

‘We have now been looking at how we can work more closely together and in particular how we can make more space available. The show rooms are important and magnificent, but they give a very one-dimensional view of Knole of in its most glorious era, the early 17th century.’

His children often share snaps inside the home, including the grand swimming pool, amazing views and