Amusement parks have dress codes, and many get enforced when the temperature goes up.

It’s also not uncommon for a dress code “violator” to be offered a branded clothing item, so they can fit the code and not have to exit the premises. But, not every park will do this with a $75 shirt.

That’s what happened to Amanda DiMeo when she visited Walt Disney World’s Magic Kingdom in mid-May, according to a viral TikTok video she shared at the time.

The video, which was captioned as a “Free Disney shirt hack” on May 19 shows DiMeo was able to get a pink shirt from one of the park’s gift shops.

According to DiMeo, a cast member informed her that her crop top was a little too cropped for the park’s liking. She was then offered a ticket that directed her to the nearest gift shop.

In her own words, “I just got a $75 t-shirt just because I was wearing a shirt that was exposing my under-boob a little bit.”

“I didn’t know there was a specific dress code for Disney especially since I wore the shirt one other time to Magic Kingdom and no one said anything about it the last time,” DiMeo told Fox News. “The voucher limit for a shirt was $50 but I had the cashier ask the manager if I could get the $75 spirit jersey and the manager approved the order.”

“Everyone was super nice about the whole process and I didn’t expect the video [to go] that viral,” she added.

Representatives at Disney Parks did not immediately respond to Fox News’ request for comment.

Many commenters under DiMeo’s video showed support or saw the humor in the situation.

“I think I have a way to get some free Disney pants,” another user joked.

The shirt complimentary shirt DiMeo appears to have gotten is the Walt Disney World Briar Rose Gold Glitter Spirit Jersey, which the park considers a “premium pullover” that’s made out of 100% cotton. According to the shopDisney website, the shirt retails for $69.99 – not including tax. 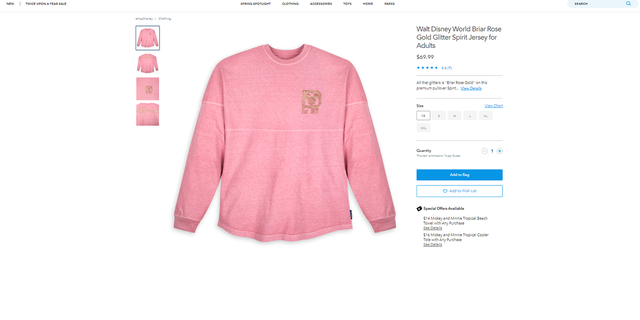 In terms of Walt Disney World’s dress code, the park’s website says “the parks are family friendly” and that the company “reserves the right to deny admission to or remove any person wearing attire that is considered inappropriate or attire that could detract from the experience of other Guests.”

While DiMeo’s viral video has a happy ending, it was posted days after another woman was booted from Six Flags’ Frontier City in Oklahoma for reportedly wearing shorts that were deemed to be too short by theme park security guards.