When Dead to Me premiered in the spring of 2019, it set viewers up for one shocking reveal after another. The Netflix dark comedy wasn’t exactly honest with us when it introduced Jen Harding (Christina Applegate) and Judy Hale (Linda Cardellini) as two grieving women who form an unlikely bond after meeting at a bereavement support group.

Jen, cynical and jaded, is reeling from the sudden death of her husband, Ted, in a hit-and-run accident. Judy, bubbly and free-spirited, is grieving several painful losses herself, but the story she shares – about her fiance, Steve, dying of a heart attack – is a doozy of a lie. Jen and Judy connect over Facts of Life reruns, cookies and TV’s go-to wellness treatment for White women over 40: jumbo glasses of wine and the nostalgic, legalised contraband of their youth. (“It’s legal, relax,” Judy tells Jen while sparking a joint on the beach.) 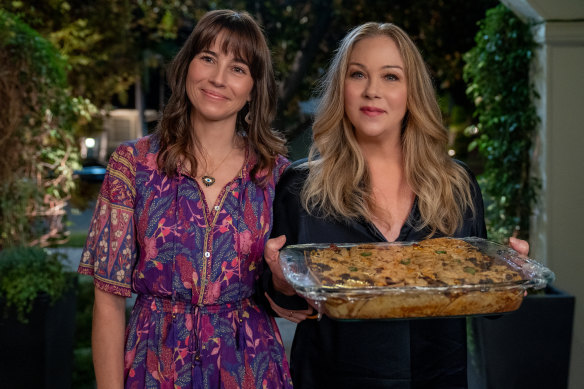 Judy Hale (Linda Cardellini) and Jen Harding (Christina Applegate) are two grieving women who form an unlikely bond after meeting at a bereavement support group in Dead to Me.Credit:Saeed Adyani

Their friendship endures following the series’ first big reveal – that Steve (James Marsden) is very much alive – and deepens in the episodes leading up to Judy’s confession that she was driving the 1966 Mustang that killed Ted. Dead to Me required viewers to suspend disbelief enough to buy that a woman would continue to be friends with someone she knows played a part in killing her husband, but even in those early episodes, it was clear that Jen and Judy were meant to be in each other’s orbit. Their entangled lives became the show’s inexorable truth as the fallout from the fatal hit-and-run grew more complicated and Season 1 ended with Steve’s bloody body in a pool. Season 2 upped the drama ante, introducing Steve’s “semi-identical” twin Ben (played to goofball heights by Marsden) as a love interest for Jen.

Grief remains an achingly central theme as Dead to Me returns for its third and final season, which picks up just moments after Season 2’s cliffhanger ending: the scary car accident Jen and Judy get into after Ben, off the wagon after years of sobriety, swerves into Jen’s car at a dangerous intersection. As with previous seasons, it’s hard to describe much (or any) of the plot without giving away the twists, but the dramedy’s final 10 episodes find Jen and Judy juggling life – messy and confounding as ever – while trying to conceal their roles in the active murder investigation still surrounding Steve’s death.

Dead to Me has never been a perfect show, and the final outing is particularly uneven when it comes to the criminally minded storylines. One could quibble over the superficial way the series incorporates characters of colour – particularly police detectives Ana Perez (Diana Maria Riva) and Nick Prager (Brandon Scott), who both feel an outsize duty to protect Jen and Judy in various ways – and certain plot points wrap up with the shoddiest metaphorical caution tape. 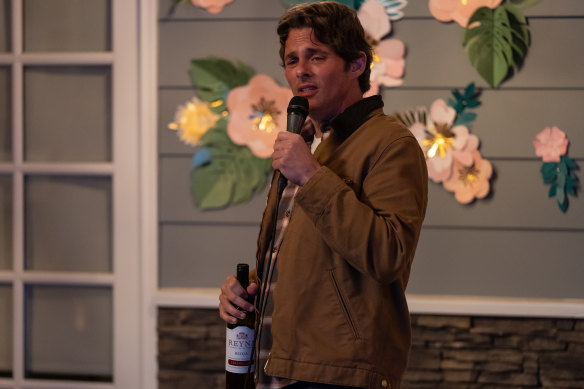 The series, from creator Liz Feldman, excels in its depiction of two dynamic women who become each other’s chosen family. Their complex and intense relationship has always been the best part of Dead to Me, anchored by Emmy-nominated performances from Applegate and Cardellini. In between Jen and Judy’s uniquely foul-mouthed banter and their murderous schemes, the show has explored more true-to-life issues such as the emotional abuse that Judy comes to term with following Steve’s death and Jen’s pain surrounding intimacy issues she and Ted had following her preventive double mastectomy. Applegate, a breast cancer survivor who underwent the surgery in 2008, urged Feldman to incorporate her personal experience. “[The surgery] is an incredibly painful thing to go through. It’s an amputation of a part of you,” Applegate told the Hollywood Reporter in 2019. “It’s part of being a woman, and I wanted to be honest. So I brought it to Liz and she was like, “OK, let me see how we can weave this in.” I think she did it beautifully.”

Other sobering storylines have revolved around Judy’s struggle with infertility and Jen’s insecurities around motherhood. Though both have confessed unspeakable misdeeds to one another, the series spends a little more time this season grappling with what they owe to the other people in their lives: namely Ben, and Jen’s teenage son Charlie (Sam McCarthy). Whether it’s an adequate amount of time is up for debate; there is a certain audacity in continuing to lie to the people you love.

Other sobering storylines have revolved around Judy’s struggle with infertility and Jen’s insecurities around motherhood.

Despite its many twists and narrative falsehoods, Dead to Me was always authentically about something bigger: the shared grief that brought Jen and Judy together. This season yet again brings us back to the bereavement support group where the duo met. There, the same earnest pastor that introduced them explains that the group is referred to as a “circle” not just because of the way the seats are arranged, but because “grief is a continuum, it goes on and on and on and …”

The show knows when to close the loop on its unwieldy narrative; the murder mysteries become secondary as the show focuses more on the core friendship at its centre. Dead to Me returns, as always, to grief, but it’s the cathartic and beautiful kind – the kind that stays with you, reminding you of what you lost and what it meant to your life. The Washington Post