Australian parents will likely have to wait a couple more months before children under five can get their COVID-19 jabs according to Allen Cheng, the previous chair of the Australian Technical Advisory Group on Immunisation.

In an interview with The Sun-Herald and The Sunday Age, Cheng – who is a member of ATAGI – said that it was likely the Moderna and Pfizer vaccines would be “rolled out in a couple of months as the TGA [Therapeutic Goods Administration] and ATAGI look at it, people are trained [to deliver the jab] and we get the vaccine”. 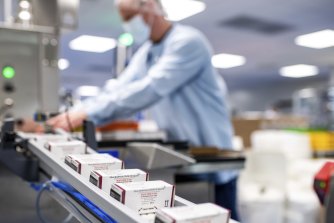 Pfizer’s toddler jab is one-tenth as strong as the adult one, and is given three times to provide immunity.Credit:Pfizer

Cheng would not put a time frame on the roll out to children under five but, in practice, waiting a couple of more months would mean the vaccines do not start to be administered until late August or the start of September.

“What we do know after two years is that COVID is not a severe disease in children. Very occasionally there are severe complications when they have other medical conditions,” Cheng, an infectious disease physician, said.

“While I understand some parents are scared and anxious about their kids getting COVID, it’s not a dangerous disease in that group [kids aged under five].”

Cheng’s comments come as children in the United States moved one step closer to being eligible for the two-dose Moderna and three-dose Pfizer vaccines for children after the Food and Drug Administration approved the shots for children as young as six months old.

The final step is for the Centres for Disease Control and Prevention to recommend how to use vaccines, with a recommendation expected within 24 hours and final sign-off due soon after.

The number of Australians eligible for a fourth or “winter” dose of the COVID-19 vaccine was expanded on May 25 from 5 million to 6.5 million people, including those over 65, in aged and disability care, the severely immunocompromised and people with chronic disease or cancer.

But the roll-out of a fourth dose to the general population could also be some months away because, Cheng said, three doses gives good protection against severe disease for younger, healthier people.

“If you look at [cases of] severe disease, basically young people don’t get severe disease and are substantially protected by three doses. The incremental benefit from a fourth dose is pretty small,” he said. 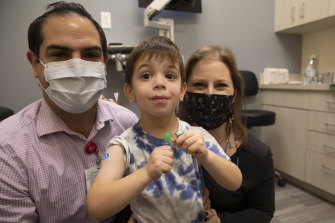 Vaccines will be available to children as young as three-year-old Hudson, seen here with his parents Barry and Ilena Diener at a vaccine trial in New York last November.Credit:AP

University of Sydney Infectious Diseases Physician Tony Cunningham said increasing the number of people in the general population who had had their third jab should be the top priority.

“Only 68 per cent of people in New South Wales and 72 per cent of Victorians have had their third dose. We need greater emphasis on getting the third dose into people, particularly people over 65,” he said.

“The emphasis should be on getting the third shot up to 90 per cent.”

University of Queensland Infectious Diseases Physician Paul Griffin backed the assessment that a fourth dose was not necessary, yet, for the general population but added “if we saw a spike in intensive care cases, that would make us reconsider”.

“It’s very clear that everyone will need additional doses at some point in time.”