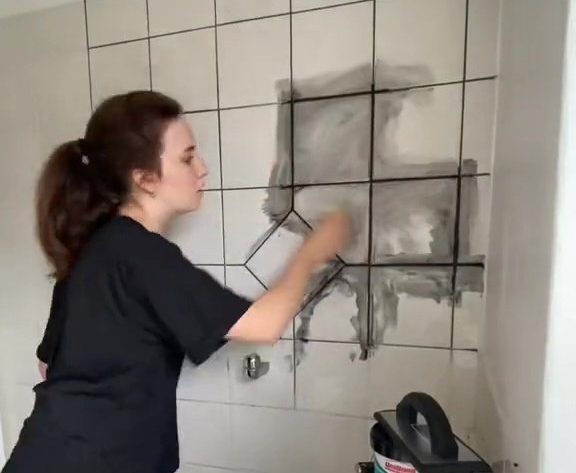 A couple who added £100,000 to the value of their home – and shared their renovation journey on TikTok – have revealed how they transformed the property in just a few months.

The house was ‘filthy’ and ‘smoke-damaged’, so they had bartered the asking price of £400,000 down because of the extent of the damage.

Seeing potential in the 1970s house – that has four bedrooms, two reception rooms, and a conservatory – they snapped it up, and have worked hard to turn it into a relaxing haven.

‘The house was such a mess – it hadn’t been looked after very well so there were chunks of the floor missing, holes in the walls and general dirt everywhere,’ said Rebecca, a wedding planner.

‘One of the worst problems was smoke damage caused by an old wood burner that was used to heat the house, which has meant we’ve had to scrub all of the walls to get the soot off.

‘The windows were so bad that when we moved in, we literally had to wear three jumpers and hold hot water bottles so as not to freeze. The carpets were filthy and the house was ultimately in need of some care and attention.’

The couple rose to the challenge, hiring tradespeople to give the home a complete overhaul, and taking on a number of jobs to save cash.

One video posted to their TikTok (@our70shome) highlights just how dirty the property was, showingdark liquid seeping from the walls as Rebecca scrubs them.

One person said: ‘I thought the walls were just releasing a dripping goo at first!’

It was a long process, which started with the upstairs bedrooms to give Rebecca and Fraser somewhere to live and work amid the renovations.

They chose to knock down several walls to create larger rooms – as well as tearing down the conservatory in order to make a large family kitchen-diner.

Rebecca and Fraser have also dabbled with DIY themselves, doing all the painting, skirting boards, ripping up of flooring and knocking down of walls themselves.

Being careful, though, they left anything dangerous or that they weren’t comfortable doing to the professionals.

So far, they have spent £25,000 – just under half of their budget – and have transformed their bedroom, two offices, the bathroom and a dressing room.

The rooms have undergone dramatic transformations, being updated with modern décor and their signature style.

The master bedroom, in particular, is unrecognisable, going from a dated room with plain furnishings to a stunning sage green sanctuary, with hanging light fixtures and dark, wooden accents.

Currently, they’re working through the downstairs renovations, focusing on the lounge and kitchen.

Rebecca said: ‘We want to create somewhere we can see ourselves living for the next 10 years that we can enjoy as a couple with our friends, and potentially as a family.

‘We want to create a house suited to us and reflecting our personalities and lifestyles.’

She added that, given they’ve still got more to do do, they feel like they’re ‘living on a building site right now’.

However, the promise of a steep rise in the home’s value helps keep them motivated.

‘We’re not sure but we expect the market value to have increased,’ says Rebecca.

‘Once the extension is finished, we hope to get the house revalued for around £475,000.’