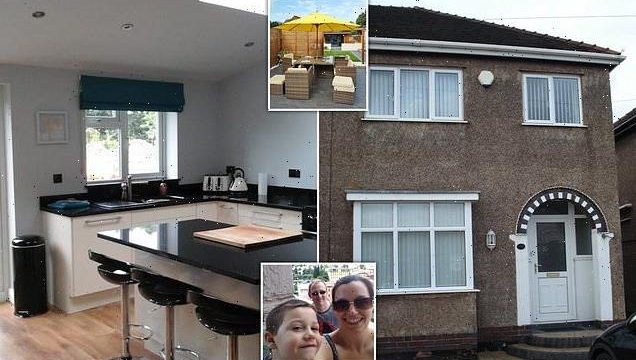 Couple in their 30s reveal how they paid off £92,620 mortgage on their three bedroom semi in just SEVEN years – and still managed to go on holiday and days out

A couple in their thirties are celebrating being mortgage free after paying off their £92,620 mortgage 28 years early.

Addiction counsellor Siobhan, 36, who now works as a paraplanner for an independent financial advice company, and her husband Lee Bowen, 38, head of operations for a stock auditing company, purchased their first home together in from Great Wyrley, Staffordshire in 2011.

Despite having a relatively modest combined income of £40,000, the couple were able to own their three bedroom semi-detached home outright by making careful overpayments, budgeting and sacrificing the latest gadgets.

The couple, who are parents to a nine-year-old son, Caelen, set themselves a challenge to clear their mortgage before Siobhan was 40 – but they smashed the already ambitious target six years earlier than planned. 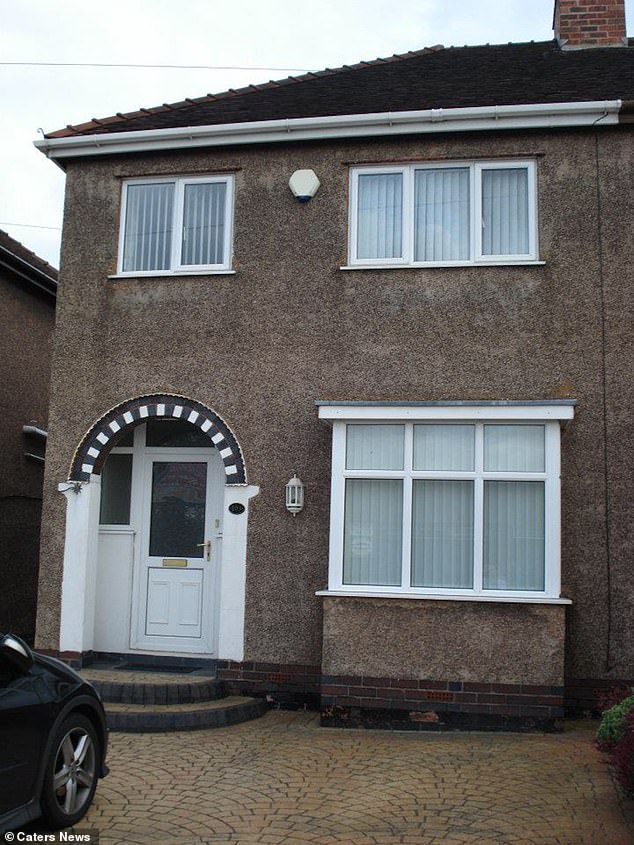 Siobhan, 36, and Lee Bowen, 38, from Great Wyrley, Staffs, have paid off the mortgage on their three bedroom semi-detached house (pictured) 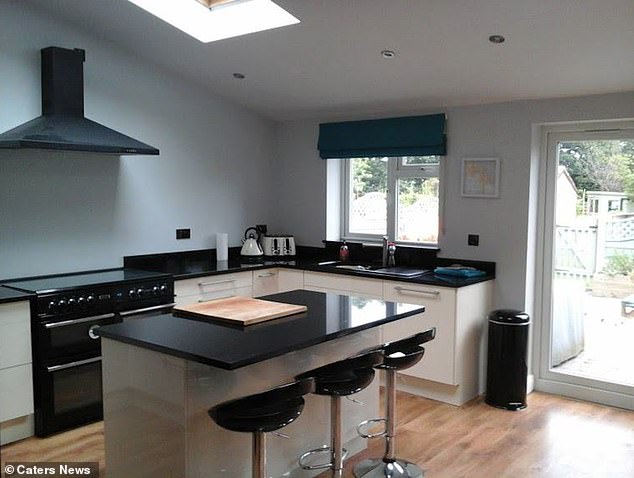 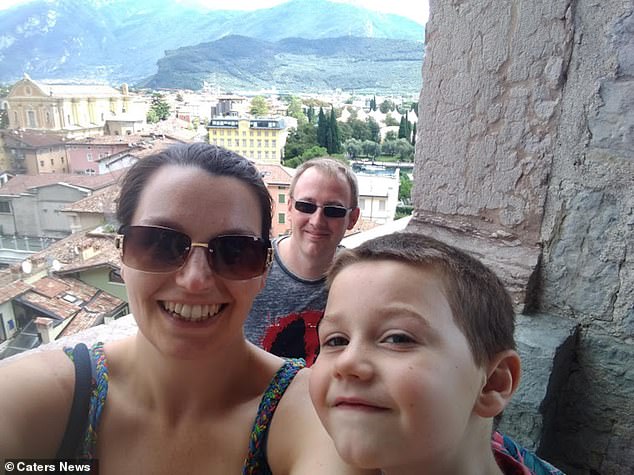 Siobhan revealed they were able to negotiate the price of their home because it had been up for sale a while. Pictured: The family

The super savvy savers have since been enjoying a mortgage free lifestyle and say the freedom it has created is priceless.

Siobhan said: ‘We struggled at university to earn enough to cover the bills and stay afloat. We realised how easy it was to get into financial difficulty.

‘We became disciplined and saved regularly once we had full time jobs.’

What Siobhan and Lee spent during a typical month

Mortgage payment: Up to £394pm

Increased overpayments when standard repayments reduced and when they had pay increases.

This included insurance, fuel, MOT, service and repairs. They drive a reliable Honda Civic which has minimal repairs and is cheap to run.

They shopped around for best deal and paid annually

Spent on insurance, food and vaccinations

They don’t have Sky TV and only use free deals.

Shopped at Aldi and Home Bargains – Bulk buy everyday items where possible, planned meals, checked cupboards and made a list, cook from scratch, no ready meals

This went towards the lump sums that they paid

They put down a 15 per cent deposit of £16,880 to secure a better mortgage rate and kept some back for renovation work to the property.

‘It was good value as a typical home in our area was around £150,000. We negotiated because it had been up for sale a while,’ Siobhan said.

‘We could have borrowed up to £190,000 but we chose not to max ourselves out. We wanted to ensure our mortgage repayments and essential bills would be affordable on one wage.

‘It was very important to us to have a mortgage with unlimited overpayments.’

Siobhan and Lee signed a 35-year term after being refused a 25-year mortgage.

To begin with, the morgage payments were £394 and they paid an additional £160 per month.

Siobhan said: ‘We did not have high paying jobs; our household income when we started out was around £40,000 gross per annum.

‘We achieved a good balance. We didn’t go without but we didn’t try to keep up with the Jones’s either. Lee drove a 12-year-old Volvo that had done 200,000 miles on a petrol engine, it never broke down.

‘We still had holidays and even ticked off a few bucket list places like New York, Croatia and Lake Garda – always finding the best deal for our money.’

They would try to holiday abroad less often or spend it in the UK, and would travel with family and friends, finding it was more cost effective.

Siobhan added that this is ‘not only more fun’ but the couple split the cost of accommodation and travel with the other people.

For larger trips like New York, the super saver booked flights and accommodation separately and they travel to and from the hotel on the Metro.

To save on eating out, they booked a hotel that offered half board so evening meals were at the hotel.

During their days, they went to galleries, parks, Staten Island Ferry to see Statue of Liberty which were all free, and they even returned with half of their $500 spending money. 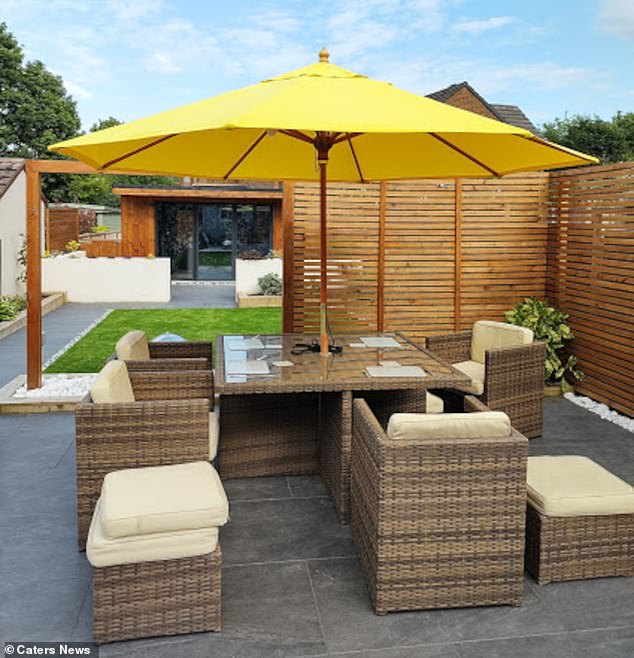 Sibohan said their household income was around £40,000, when they began with a mortgage of £394 a month while paying an additional £160 per month. Pictured: The family’s garden now 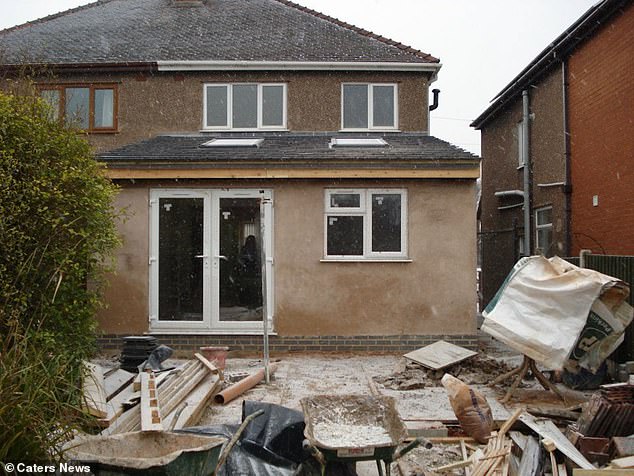 Sibohan said they were willing to sacrifice their lifestyle while focused on their goal of paying off their mortgage before her 40th birthday. Pictured: The house during renovations

The couple also chose to invite friends and family over for home cooked meals instead of going our regularly, keeping takeaways to an average of once a month and doing lots of home cooking.

Meanwhile, batch cooking means that lunches are usually leftovers and there are meals prepared in the freezer.

Siobhan added: ‘Rather than sacrifice a happy lifestyle, I feel the main thing we did was purposely make a string of wise choices along the way. We educated ourselves with the help of Martin Lewis and Pete Matthew from The Meaningful Money Podcast.

‘We never had a car on finance and I couldn’t justify spending £45 a month for a mobile phone.’

They also enjoy days out, but are sure to get the best value deals where they only need to ‘pay for parking’ and can take a picnic.

For bigger days out, Siobhan purchased Merlin passes in the January sale, which gives members free access to theme parks like Alton Towers and attractions such as the London Eye. 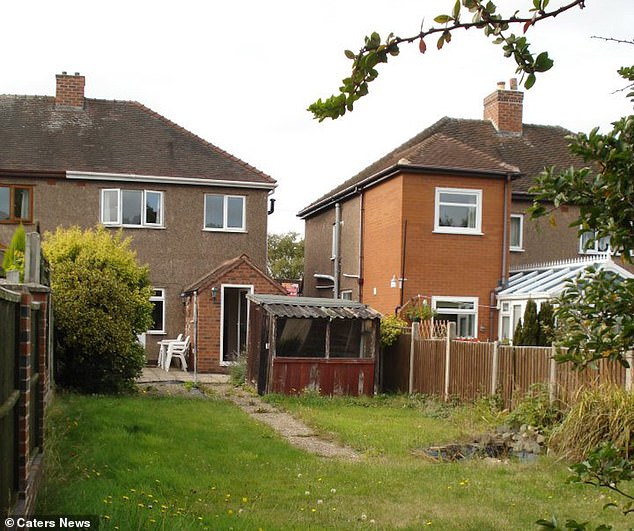 Siobhan revealed their value of their house increased to £145,000 after renovations and had their standard payment reduced after asking for a recalculation. Pictured: The garden in 2011, when they bought the house 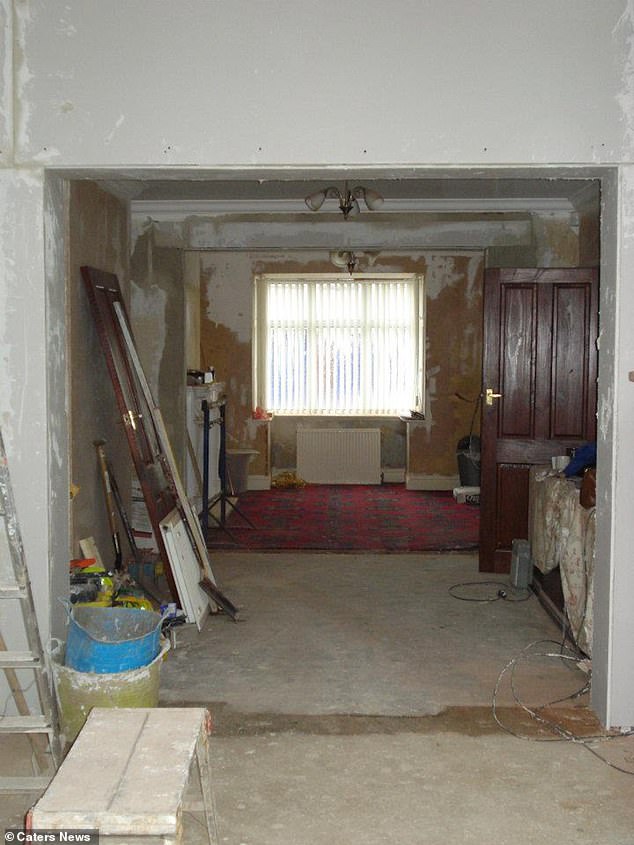 The couple set up a savings account until they eventually had enough to pay off the remaining lump sum, just seven years after purchasing their home. Pictured: The interior during renovations

The family also have National Trust annual passes and used these during holidays in the UK so that the cost of days out is already covered.

In 2012, the couple welcomed their son, Caelan and Siobhan dropped to a basic maternity wage.

Two years after buying, they re-mortgaged still owing £89,210. But thanks to renovations their home was valued at £145,000 and the loan to value ratio was reduced to 60 per cent giving them access to the best deals.

They continued to make overpayments on their five-year fixed rate and in 2016 asked for a recalculation.

The standard payment was reduced further, while Lee’s pay rise allowed the couple to add more to their overpayments.

In October 2018, Siobhan lost her job and the couple stopped their overpayments. 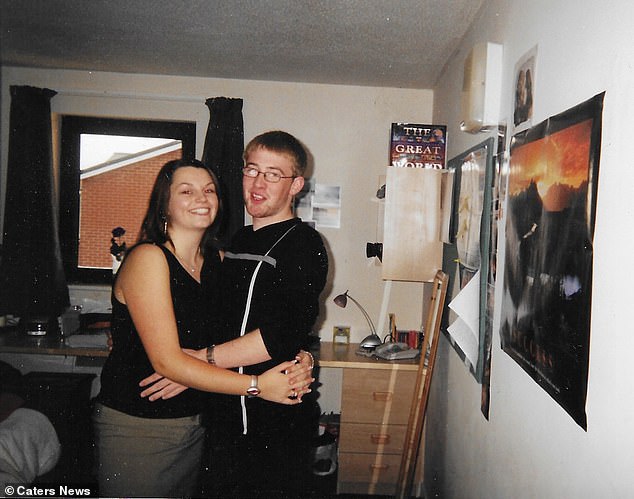 Siobhan said it’s best to overpay every months as lump sums may be harder to part with. Pictured: Siobhan and Lee at Manchester University in 2003 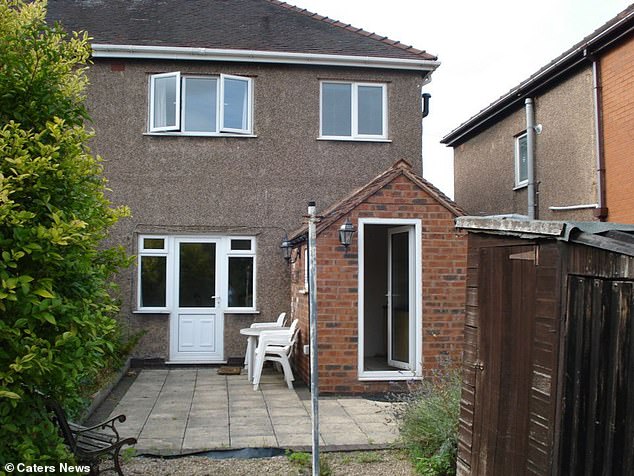 Siobhan advises against maximizing yourself out on the initial purchase because your circumstance could change. Pictured: The family home when purchased in 2011

Once back in work they no longer overpaid, but set up a savings account and eventually had enough to pay off the remaining £18,838 as a lump sum in March 2019 – just seven years after buying their home.

‘We are proud, there was no inheritance or secret lottery win. It was done through hard work and saving.’

Siobhan shared her tips for others, saying: ‘Use an overpayment calculator, even small overpayments can make large savings over the mortgage term.

‘The more you can overpay in the early days the better it will be in the long run because interest is much higher at the start of the mortgage.

‘Overpay consistently every month as lump sums may be harder to part with.

‘Don’t max yourself out on the initial purchase. Just because you are allowed to borrow more, doesn’t mean that you have to, make sure its affordable even if your circumstances were to change.

‘Balance is key, don’t deprive yourself too much or you won’t stick to it. Little and often is better.’

The self-made money guru added: ‘Ask for a revaluation if you have carried out extensive renovations or the market has increased the value of your home, it will reduce your LTV ratio so you can get a better deal.’

‘Be warned, it can become addictive once you realise the savings that can be made but being debt free has given us security, freedom and peace of mind.’

Siobhan, now works as a paraplanner for an independent financial advice company.

She said: ‘I think money saving is my calling.

‘Our next challenge is to retire early.’

Siobhan shared some of the tips they used to save some cash, including earning additional money via YouGov and online surveys. 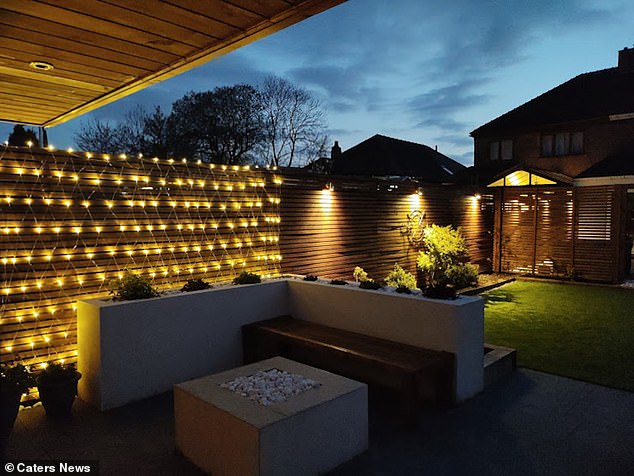 Siobhan said you’re less likely to stick to your plan, if you deprive yourself too much and don’t have a balance. Pictured: The family’s garden now 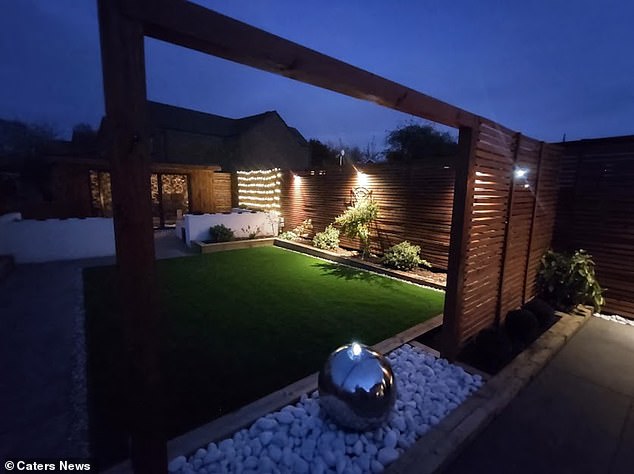 Siobhan said being debt free has given she and Lee ‘security, freedom and peace of mind’. Pictured: The garden after a full renovation in April 2021

They also never paid for TV subscriptions, only ever signing up for free trials and checked for new deals on the Money Saving Expert email every week.

To keep on top of her spending, super organised Siobhan  kept a spreadsheet of all expenses and date when they are due for renewal.

She switched a ‘dummy’ bank account every few months to take advantage of switching deals and set up a sweep account so any money left at the end of the month was put into a separate account.

Credit cards with 0% interest helped when paying for large bills such as car insurance and they spread these costs monthly.

She lists buying deals on websites like Wowcher, purchasing quality clothes that would last and adding any pay increases straight to the mortgage or savings as three things she did to save the cash.