Attorney-General Michaelia Cash has promised Parliament will have a chance to debate a planned anti-corruption watchdog before the end of the year, as the opposition seeks a second inquiry into the government’s commuter car park scheme.

Alan Tudge, the minister who drove the creation of the $660 million car park fund in the lead-up to the 2019 election, has declined to answer questions about it since shifting out of the urban infrastructure portfolio in December. 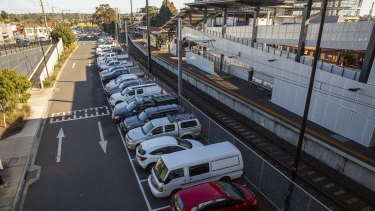 The existing car park at Ringwood station, one of several sites chosen for upgrades under the federal government’s controversial congestion fund.Credit:Paul Jeffers

The Auditor-General has lashed the scheme, saying funding was targeted at government-held and marginal seats rather than based on need. The audit reported sites were proposed by Liberal MPs, senators and candidates or matched Labor’s election promises from opposition. Twenty-seven of the 47 projects were approved by Prime Minister Scott Morrison the day before he called the 2019 federal election.

A former Supreme Court judge has labelled the car parks program corrupt and governance experts fear the nation is on a “slippery slope” into corruption. But the government’s proposed Commonwealth Integrity Commission wouldn’t be able to investigate it or similar schemes in its current form, which only allows it to investigate suspected criminal offences.

Mr Morrison announced plans for the integrity commission in December 2018 but the plan stalled during 2019 and was not revived until December 2020, when the government released the draft bill and asked for views.

More than 330 written submissions were made and the government held 47 consultation sessions.

“The government is currently considering the extensive feedback received through the consultation process in order to inform further refinement of the draft legislation,” a spokesman for Senator Cash said.

“The Morrison government is committed to putting our legislation to establish a Commonwealth Integrity Commission to Parliament by the end of the year.”

Labor has asked Parliament’s public accounts and audit committee to examine the car park scheme in a bid to get some of the ministers involved in the program to answer questions about its creation and operation.

The Age and The Sydney Morning Herald sent 10 questions to Mr Tudge about the processes and guidelines he used to choose the projects for funding, steps he took to assure himself the funding was spent in an efficient, effective, economical and ethical way, and his involvement with a “top 20 marginals” list the audit office says was the starting point for the scheme.

The entire response from Mr Tudge’s spokesman was: “Questions about urban infrastructure programs should be directed to Minister [Paul] Fletcher’s office.”

Mr Fletcher became the Urban Infrastructure Minister in late December. He previously held the portfolio for eight months in early 2018, before the creation of the car park scheme.

The Infrastructure Department advised ministers on whether “a project represents a proper use of relevant money”, the spokeswoman said. The audit had noted there were no instances where Mr Tudge had approved funding for a project the department said should be rejected or vice versa, she said.

However, analysis of data from RMIT University’s Australian Urban Observatory casts doubt on the claim the projects were chosen based on need.

“The evidence is clear, the commuter car parks program is sports rorts on an industrial scale,” he said. “It’s treating public money as a Liberal slush fund. And it’s yet another illustration of the urgent need for a national anti-corruption commission.”

In the Senate, Labor plans to introduce legislation that would force a minister who approves a grant to their own seat or rejects grants approved by their departments to reveal that within 30 days of making the decision. The finance minister would then have five days to table the information.

Shadow finance minister Katy Gallagher said this would reduce the time a minister could hide details of a decision from 16 months to two months.