Experts agree that a shortage of coal-fired power generation is one of the main causes for the current crisis, where power prices are soaring and there are rolling warnings of electricity blackouts.

47 units – or about 25 per cent of the coal-fired power available to the electricity grid – are out across the East Coast due to plant failures which are either due to technical failures of equipment or lack of long-term investment in maintenance. 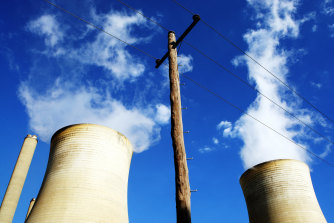 Coal-fired power was driven out of the electricity grid by a perfect storm of natural disasters, high prices and plant failures. Credit:Jessica Shapiro

On top of this is scheduled downtime for maintenance at the big Yallourn plant that generates about one fifth of Victoria’s power, and shortages of coal supply to coal plants like NSW’s Mt Piper – due to mine flooding in recent torrential weather across the East Coast.

All told the outages have taken 25 per cent of coal power’s generation capacity out of action.

But could the past month’s problems with the electricity grid have been avoided if Australia had had more coal-fired power stations?

Grattan Institute energy director Tony Wood says it is wrong to say the situation has been “caused by too much renewables or too much coal”.

“There was no point at which building a new coal-fired power station could have solved the problem. And, of course, it would have become a stranded asset pretty quickly that was outcompeted by cheaper renewables.”

“Both sides of that argument are fundamentally wishful thinking,” Wood says.

Compounding the absence of so much coal power from the grid is the price pressure squeezing coal operators. Russian President Vladimir Putin’s invasion of Ukraine in late February provoked international bans on Russia’s energy exports, creating a global shortage that pushed prices up.

This got worse when this week coal plants across the grid began to withdraw some of their electricity generation capacity from what was already an immensely complicated market.

The electricity market usually works by power generators offering power supply for sale, based on 5-minute trading cycles, and retailers buying what is needed for their customers.

But plants were powered down because the cost of coal was making operating them unprofitable, and even more so when on Monday the Australian Energy Market Operator (AEMO) imposed a $300 a megawatt hour cap on the price coal plants can charge for their power generation.

So when the coal plant withdrawals started there was not enough electricity to meet demand – which is running high because every customer who can afford it is switching on their heaters because of the cold winter weather.

AEMO was forced to make rapid-fire interventions by using its hefty market powers to force coal plants to fire back up and prevent blackouts, triggering compensation payments to the operators that will ultimately be borne by households and businesses.

AEMO’s massive and complicated task quickly became too much manage and on Wednesday afternoon its chief executive Daniel Westerman confirmed that delivering electricity had become “impossible … under the current conditions”.

That’s when trading was halted and AEMO took control of the market, directing when and where coal plants and other generators including gas and renewables to supply their electricity.

Melbourne University energy expert Dylan McConnell says “no one in their wildest dreams would have ever imagined that power prices would have been lower than the cost of generation”.

“To say that it’s an unprecedented set of circumstances is probably underselling it. It’s a cliche but there are multiple factors compounding it. You’ve got the underlying commodity prices, because of international conflict. You’ve got cold weather, multiple coal plant outages, and then you’ve got that overlaid on top that a price protection mechanism.”

Gas “peaking” plants – which have historically been called on during summer heatwaves to fill extra demand created during heatwaves when everyone in Sydney, Melbourne or Brisbane turns their air conditioners all at once – were being called on for extended periods and supplying high cost electricity that triggered cost thresholds which have barely been breached before.

“The only mechanism that AEMO had at its disposal, in terms of the rules of maintaining the operation of the market, was the administrative price cap,” Wood explains.

On Thursday experts praised AMEO for its handling of the situation. By Thursday afternoon AMEO said there had been “significant improvements” in the operation of the grid and Energy Minister Chris Bowen assured people he was “confident we can avoid blackouts”.