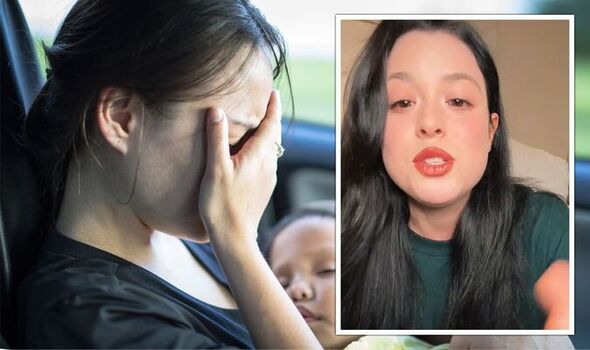 The TikTok creator who speaks about her child-free life on the platform responded to a comment left to her by another user. They wrote: “In fairness when it comes to school holidays like the week of spring break) ideally, parents would be given priority.”

But Callie didn’t agree and she retorted: “No, you do not get priority because you chose to have kids. If the week of spring break is so important you need to show initiative and take that time off.”

The video caused another woman to take to her TikTok account to tell her own story. Eve Marie describes herself as a “chaotic millennial” and she has 164.4K followers. Eve said: “So I used to work at this place and I had moved across the state to work at this place. And I worked with this woman, let’s call her Karen, who had two kids.

“I knew that I wanted to go home for like the week or so a Christmas break. I wanted to see my family. I put in leave for that week months in advance.

“The week before my boss calls me into his office, let’s call him Bob. He say’s, ‘I know you’re planning to take off for vacation but I talked to Karen and she decided that she really wants to take her kids to Disney World over the break. I was just really hoping that you could find it in your heart to like let her take your week so she can spend some time with her children’. And I was like, ‘You know what, Bob? I did what you said. I’ve searched my heart and it turns out that there is nothing in my heart that’s going to make me willing to give her my week.'”

She claimed her manager told her that she would have to tell the mother herself, which Eve did. Even went on: “I said, ‘Listen, Karen, I just talked to Bob and I know he said that you want to take your kids and for me to give you my week, but like, I’m sorry, I’m just not going to do that. I was like, I’m sure you can take your kids to Disney World another time that’s scheduled.’

The commenters were overwhelmingly in support of Eve Marie. One, also a manager, said: “Me as a manager, that would be a no. I wouldn’t change someone’s vacation to help a Karen.”

One wrote: “You’re someone’s kid too. I always say that. I may not have kids but I’m someone’s kid. and we want to be together too.” Another said: “I have kids and I am 100% on your side. If taking her kids to Disney was a priority, she would have planned it months in advance.”

Some, however, said they were happy to work over the school holidays to allow parents time off. They said: “When I was younger without a child, I’d work for holidays if it meant someone could create memories.”

A number claimed the real villain of the piece was not the mother but the manager and the corporate environment. “Why didn’t Bob find it in his heart to let you both go on vacation?” another said.

One wrote: “Bob is the real villain of this story.” Another agreed, and said: “As a manager, he should have told her no right when she asked, and should have been the one to tell her you wouldn’t switch.” One said: “Perhaps we should focus on the real issue – America working people to death- rather than fighting with each other over who should get time off.”

What does an expert say? Workplace solutions expert Adam Butler, Founder, and CEO of Officeology, shared his expert opinion. He said: “This is a tricky subject as both sides have fair points and reasonable arguments to make, however, it ultimately comes down to organisation.

“As a parent, you need to pre-empt the time you are going to need off of work to spend time with your children, especially when it comes to half-term and other school holidays. Fortunately, these school breaks are made known well ahead of time, so it falls to you as a parent to make sure you book the time off in advance to avoid the days you want being taken by someone else. Similarly, those without children should be encouraged to make sure they plan and book their annual leave in advance too.”

“The argument in the video is that some parents think they should be prioritised over those without children when it comes to paid time off. If an employer was to do this, it would come with a whole host of issues and would likely land them in hot water with the HR department. All employees should be treated equally across all areas of a business.

“Of course, there may be extreme cases such as emergency hospital appointments for children or unexpected school closures that would warrant a conversation such as the one mentioned in the TikTok video, but a last-minute trip to Disneyland doesn’t quite fit into the ‘extreme cases’ category.”