Some Chihuahuas were born to be stars.

That much became apparent during the Miss ChihuahuaTown beauty pageant, where more than 800 Chihuahuas modeled their best outfits, according to South West News Service – a British news agency.

The pageant was hosted by ChihuahuaTown Events, an event organizer that puts together “fun festivals” dedicated to the toy breed. 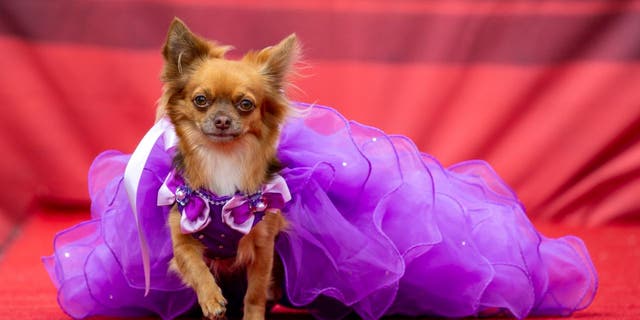 More than 800 Chihuahuas modeled their best outfits at the Miss ChihuahuaTown beauty pageant on Aug. 22, 2021.
(SWNS)

Proud Chihuahua owners from all over the U.K. attended the event at the Yardley Youth Football Club in Towcester, Northamptonshire, with their costumed pooches.

A black and brown short-haired Chihuahua named Twiglet won the Miss ChihuahuaTown crown at the Aug. 22 pageant with her pink pompom dress, which fell in line with the event’s “summer fun” theme.

Meanwhile, the top prize in the pageant’s “fancy dress” category went to a Chihuahua and Dachshund mix named Chiweenie Beanie, who donned a clown costume complete with a rainbow wig, red nose, sunglasses and party hat.

“It was crazy. People make these costumes and hand sew them for their dogs,” photographer Sue Thatcher, 69, told SWNS.

ChihuahuaTown was founded in 2017 and has been hosting festival events that are popular among Chihuahua owners.

Another event is already in the works for the holiday season, which will be called “Chi’mas.”