Big business is on a collision course with whoever wins government over pandemic-era workplace reforms that would allow cuts to employee pay or entitlements during wage negotiations.

After Industrial Relations Minister Michaelia Cash said on Wednesday morning there would be no changes to the “better off overall test” (BOOT) – a key safeguard for employees – Prime Minister Scott Morrison later said there would be no “major” changes, prompting Labor to accuse him of failing to rule out the measure. 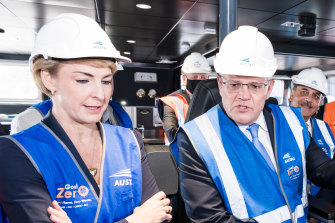 Seizing on Morrison’s pledge to revive the Coalition’s shelved industrial relations omnibus bill, gutted and mostly shelved by the government during the pandemic, Opposition Leader Anthony Albanese said the Prime Minister was putting workplace conditions “up for grabs”.

On Wednesday, workers at Bankwest, a Commonwealth Bank subsidiary, took the unusual step of considering industrial action over drawn-out wage negotiations in which they were offered a 3.25 per cent pay rise over three years, which the Financial Services Union amounted to a pay cut after inflation.

Cost of living and real wages are among the key election issues being debated by national leaders, with employers blaming the rigidity of enterprise bargaining laws for the dwindling of workplace agreements.

Major employer and business groups are calling for the BOOT – which ensures workers on enterprise agreements are paid more than the award and no employees go backwards when renegotiating – to be revised to allow the ratification of bargaining agreements that have majority workforce backing, and getting rid of entitlements deemed unnecessary for most workers.

Australian Industry Group chief executive Innes Willox said the proposed changes would have required the Fair Work Commission to apply the BOOT on the basis of rosters and types of work that were reasonably likely to be worked, “not on the basis of far-fetched, hypothetical scenarios”.

Australian Chamber of Commerce and Industry head Andrew McKellar said the industrial umpire “should be able to listen to employees and employers, and be able to apply practical, common-sense rules”.

Former Fair Work Commission deputy president Reg Hamilton also said the BOOT reforms should be discussed: “The omnibus bill had a lot of good in it, but it was unfortunate it was not well-received.”

One case cited by those wanting to change the system is a challenge by a Coles trolley operator to an enterprise agreement, saying it didn’t satisfy the BOOT as, while it offered a higher hourly rate than the award rate, the penalty rates for evenings, weekends and public holidays were lower.

Adelaide University industrial relations expert Andrew Stewart said the proposed changes left the “majority of workers better off by a small amount, and a minority of workers worse off by a large amount”.

“There’s no mystery here about what employers want, they want to be able to save money,” Stewart said.

After Labor accused the Coalition of wanting to remove the BOOT when it revived its omnibus bill, Cash accused the opposition of scaremongering: “The suggestion that the Morrison government is trying to cut wages and conditions is completely untrue.”

The accompanying statement said the Coalition was not changing the BOOT, “full stop”. However, Morrison said during a press conference in Adelaide “there are no major changes to the BOOT at all”.

Labor and the Australian Council of Trade Unions (ACTU) said Morrison was leaving the door open for changes. ACTU national secretary Sally McManus accused Morrison of “saying one thing and doing another”.

“His plans to cut wages and undermine the rights of working people are still in place,” McManus said.

Cut through the noise of the federal election campaign with news, views and expert analysis from Jacqueline Maley. Sign up to our Australia Votes 2022 newsletter here.