The annual ARIA awards will move to a new home at Sydney’s Hordern Pavilion this year, which organisers say demonstrates their commitment to live music after holding audience-free ceremonies during pandemic restrictions.

It takes the hosting gig for the 36th Australian music industry awards night after a tumultuous two years, during which artists lost income, performances were cancelled and local venues shut down.

The ARIAs were live-streamed from Taronga Zoo last year, but had been held at The Star since 2013. In the past, hosting duties have roved between venues such as the Sydney Entertainment Centre, Qudos Bank Arena, the Capitol Theatre and the Opera House. 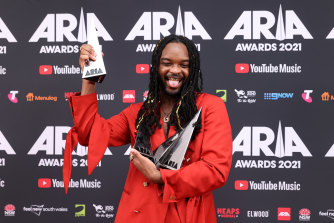 The last two years of live-streamed award shows were widely received as lacklustre without an in-person crowd. The 2021 event was also online-only – restricted to YouTube and Nine’s 9Now streaming service – which led to limited viewership and took the gleam off the event’s prestige.

Organisers promoted the new venue as a celebration of live music and a return to the vibrant energy of earlier years, as the awards revert to a live audience and large-scale broadcast format.

“In a year that has had so many challenges we want to bring the joy of music back to fans, blow up the fashion, fun, and excitement of the red carpet, and celebrate the amazing achievements of our artists in true music style,” said ARIA chief executive Annabelle Herd.

“I can’t think of a better place to do that than a venue as steeped in music DNA as the Hordern.”

In making the announcement on Sunday, the organisation said the move demonstrated its commitment to Australian music and the live stage. It pointed to the venue’s storied legacy of hosting both top Australian performers and international acts since it opened in 1924. 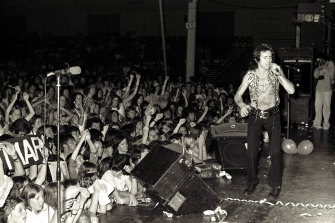 AC/DC performing at the Hordern Pavilion in Sydney on December 12, 1976.Credit:L. Thomas

The Hordern is owned by the Centennial Park and Moore Park Trust. Posts by the venue’s social media pages on Sunday said it was “thrilled to announce that Hordern Pavilion will play host” to the awards and promised more news would follow.

The Australian Recording Industry Association awards have been presented since 1987.

Last year was the first time in its history a hip-hop album – Smiling With No Teeth by Ghanaian-Australian rapper Genesis Owusu – claimed the night’s top album of the year award. Kamilaroi rapper and global superstar The Kid Laroi won the awards’ first gender-neutral best artist prize.

Owusu said his award signified cultural change in Australian music. “The ARIA Awards truly have the power to put a spark in the careers of amazing Australian artists, who might not have been as accepted in the eyes of the greater public in years past,” he said.

“This year, we get to experience it happen again, live in the flesh, at one of Australia’s most iconic music venues. It’s fitting, it’s exciting, and I can’t wait to see the ARIA Awards continue to celebrate boundary-breakers and culture-movers.”

“Sydney and NSW has been the birthplace of many outstanding Australian artists and provided the backdrop to equally as many significant Australian music moments across 36 years of the ARIA Awards,” he said.

“I am particularly excited to see the Hordern Pavilion, a landmark Sydney live music venue, provide another perfect backdrop for this year’s event.”