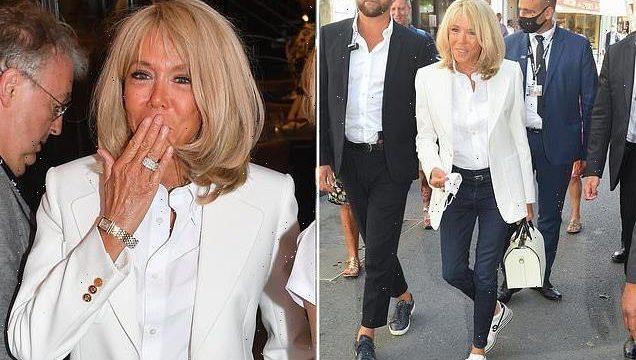 Brigitte Macron stole the show at a French film festival today as she showed off her sparkling diamond wedding ring.

Brigitte, 68, put on a stylish display as she attended the 14th Angouleme French-Speaking Film Festival in the South West of France today.

Wearing a pair of blue jeans with an immaculate off-white blazer and a white shirt, all eyes where on her rock as she sent air kisses to her fans and coyly tucked away a lock of her blond hair behind her ears.

The French First Lady, who is 24 years her husband’s senior, and Emmanuel Macron tied the knot in 2007, after originally meeting when he was 15. 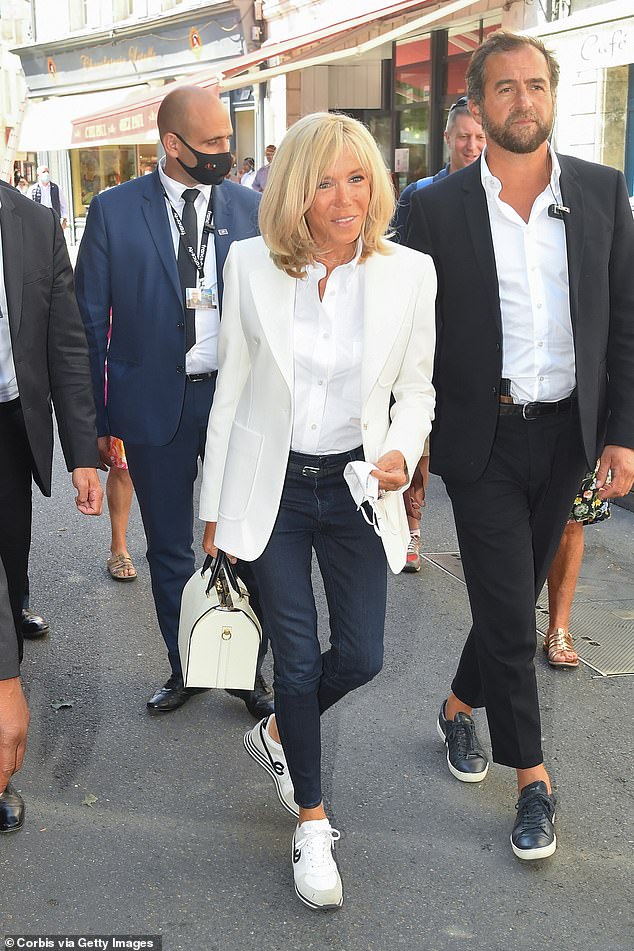 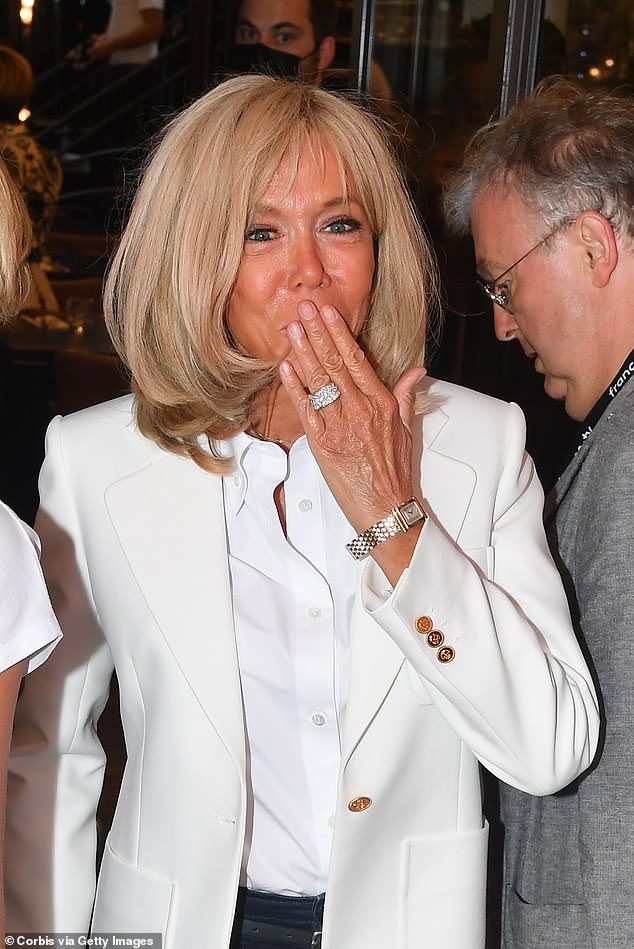 Macron, who married the French President in 2007, showed off her sparkly wedding ring at the event, pictured

Brigitte, who came with a staff of several bodyguards, was all smiles at today’s event donning one of her trademark casual chic get-ups.

The first lady opted for an immaculate off-white blazer, which she paired with jeans and a white shirt, and Nike sneaker lined with black.

Her handbag, also white with a black lining, matched the ensemble perfectly, as well as the discreet black belt around her waist.

Leaving nothing to chance, Brigitte was holding a white face mask while she strolled around the event.

Her blonde locks were styled in her perennial ear-length blond bob, and she was wearing minimal make-up, with just a dash of black eyeliner bringing out the accents of ocean  in her blue eyes.

While she sport a smart casual look, Brigitte could count on her sparkly wedding ring and a luxury watch to bring some glamour to her outfit. 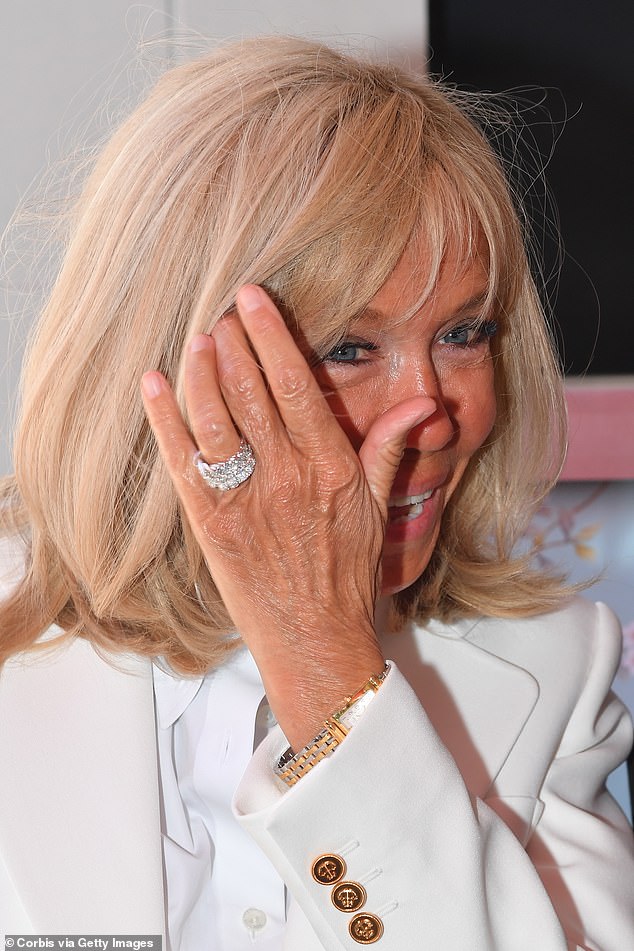 Brigitte always wears two rings, pictured. The first one is hers, and the second belonged to her sister who died in a car crash when the first lady was eight 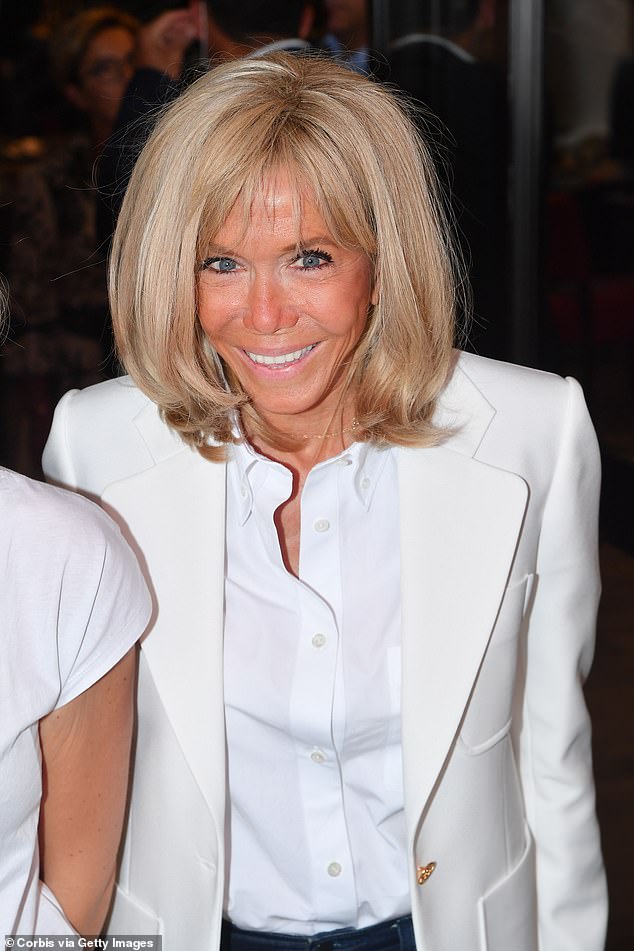 Brigitte was all smile at today’s event in an off-white jacket worn over a white skirt and jeans, pictured

Her pavé wedding ring is mounted with eye-catching diamonds and was handed to Brigitte by her spouse at their 2007 wedding in Le Touquet, North of France.

French magazines have also revealed that Brigitte always wears two wedding rings: the fist is her own, and the second is a ring that belonged to her sister.

The first lady’s sister died in a car accident when she was only eight years old, and Brigitte has been wearing her ring ever since so that her sister’s memory accompanied her everyday.

Meanwhile, eagle-eyed fans of the French president have noticed he also wears two wedding rings, one on the right hand, the other on the traditional wedding finger. 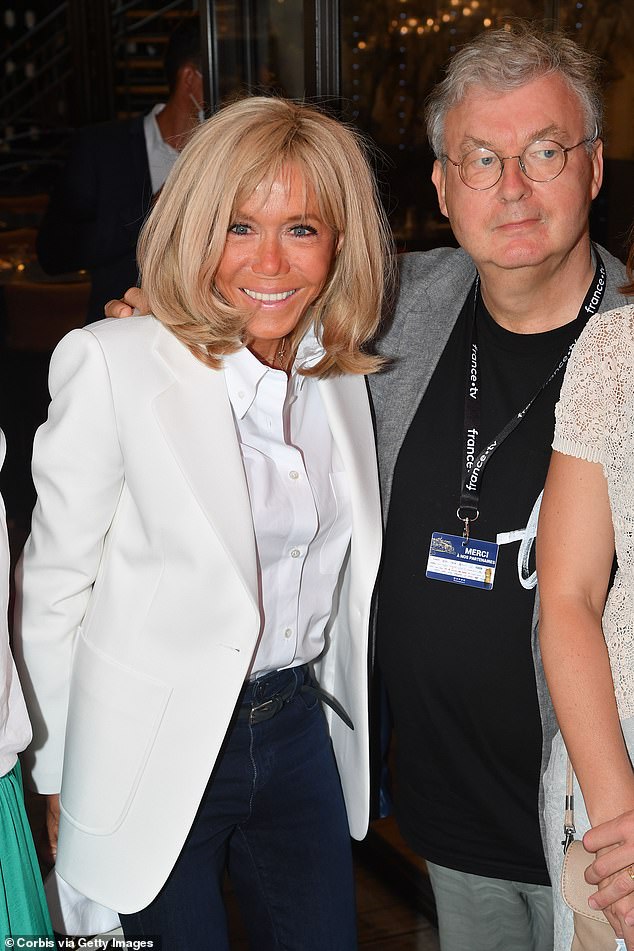 The first lady looked in her element, her blond hair styled in her trademark blond bob, bouncing on her shoulders, pictured with actor and producer Dominique Besnehard

Asked by a French journalist, the French head of state explained the two rings were from the same woman, Femme Actuelle reported.

One of the rings was offered to Macron by Brigitte when he was a student.

In journalist Anna Fulda’s book Emmanuel Macron: Such a Perfect Young Man, Brigitte explained: ‘I offered it to him when he left for Nigeria [during his superior studies]. It was the first time we’d be separated for so long, six months. 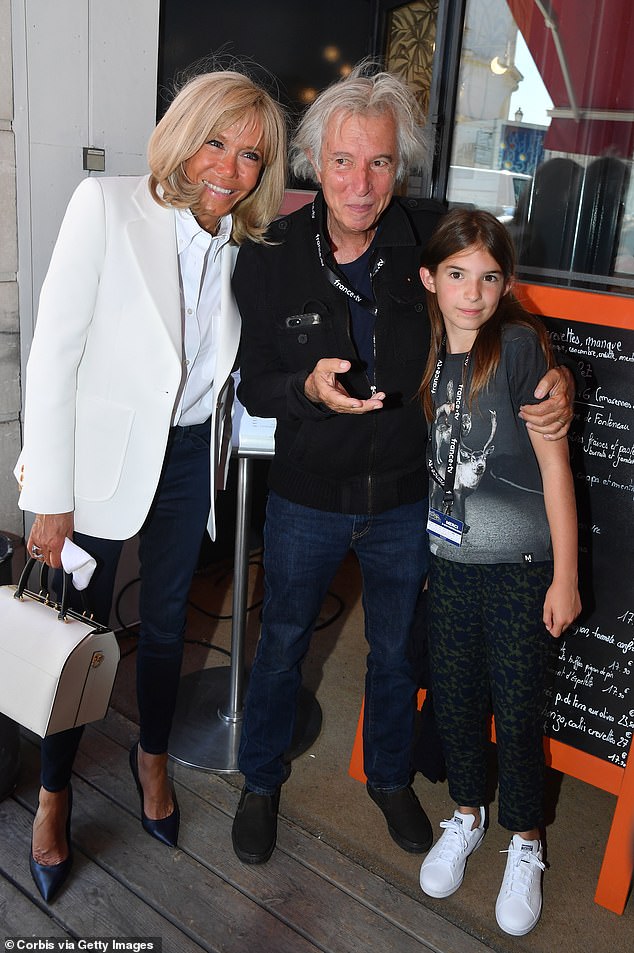 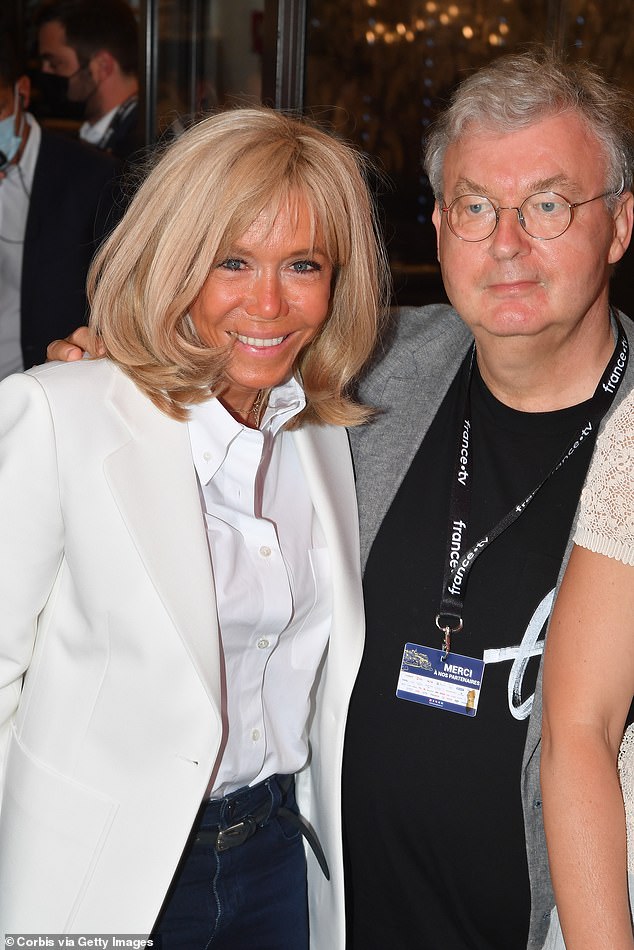