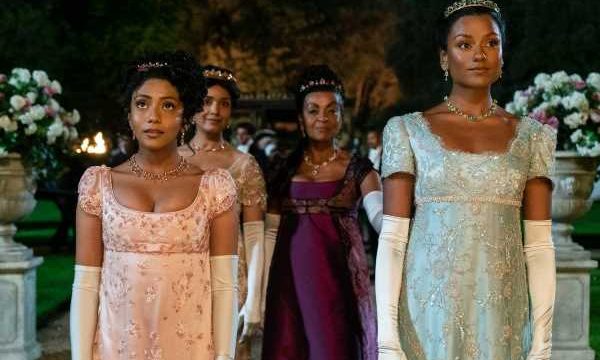 It looks like there may be a new “diamond of the first water” in London and she is a feisty one. Netflix just released the first look at season two of its sexy, Regency-era soap, Bridgerton, and all eyes are on Simone Ashley as Kate Sharma.

In the clip, Kate gets caught eavesdropping on Anthony Bridgerton (Jonathan Bailey) as he is discussing his “many requirements for a wife.” Unimpressed, Kate puts Anthony in his place, asking the Viscount, “When you manage to find this paragon of virtue, whatever makes you think she will accept your suit?” She then walks away, leaving him in shock.

According to Entertainment Weekly, Kate and Anthony will continue to go toe-to-toe, at least in the first part of the season, as Anthony sets his sights on Kate’s sister, Edwina, played by Charithra Chandran. Though at first, Kate does not believe Anthony to be a good match for Edwina, eventually, she begins to form her own feelings for him.

Chandran spoke more about the Sharma sisters at Netflix’s TUDUM fan event over the weekend. Kate and Edwina are new to town, forced to face the marriage market without a father. Because of this, Chandran said the sisters “very much feel like outsiders” and “represent the audience [viewpoint].”

Season two of Bridgerton will hit Netflix in 2022, and while Regé-Jean Page will not be returning, much of the original cast is coming back for round two, including Phoebe Dynevor, Nicola Coughlan, Adjoa Andoh, and more.