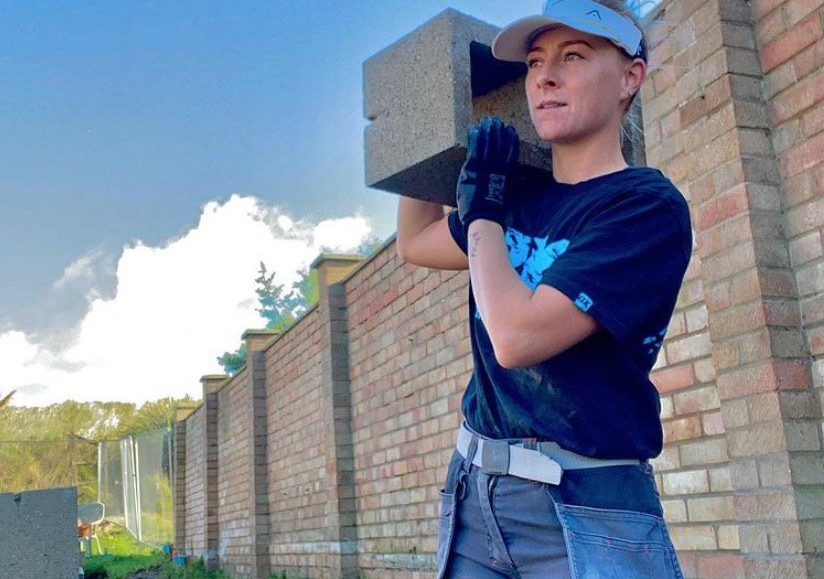 As a woman – and at a height of just 5ft 2in – Darcie Richards doesn’t fit the mould of the stereotypical bricklayer.

Being on a building site is typically thought of as a male role, and this lazy trope has led to the 26-year-old being targeted by trolls online.

Darcie, from Old Buckenham, Norfolk has over 200,000 followers on TikTok, where she shares videos about her life in the construction industry as well as bricklaying tips.

Her gender and size have apparently angered commenters on these videos, with some telling her she’s ‘not strong enough’ or ‘too slow’ to do a traditionally male job.

‘Well this has to be the most unattractive thing I’ve seen a woman do today,’ wrote one person underneath a recent upload.

Not one to shy away from misogynistic jibes, Darcie replied with a video showing her lifting heavy blocks and climbing up ladders on site, with the caption: ‘Just because you feel emasculated, doesn’t make me unattractive! #iambeautiful #letmebeme #bricktok #empowering.’

Over 16,000 comments flooded in from people defending her, with one saying ‘I think this is the most awesome and attractive thing I’ve seen all day.’

‘Hilarious when other people are offended by inspiring, independent, hard-working women doing what they do and doing it well,’ said another.

Up to 99% of the people that work on UK building sites are men, with Darcie thought to be one of the few female bricklayers in the country.

As she knows she stands out against the usual brickie, she’s no stranger to hitting back when people doubt her.

Darcie says: ‘I do get some negative comments from people online. If I do, it is always from men.

‘They just see a girl and think it’s pathetic or that I want attention; they don’t think I’m strong enough or I am too slow. One man even said it was unattractive.’

Working at her dad Ricky’s construction company, Richards Builders, with brothers Louis and Jody, was Darcie’s route into the industry. She now works for Ley Brickwork, and was made an ambassador for Scruff’s workwear’s brand new women’s line.

Darcie says documenting her day-to-day (and the support she gets as a result) has been an eye-opening experience: ‘There have been so many girls, hundreds, who have come to me and said how much of an inspiration I am to them.

‘They think it’s awesome and they are going to do the same.

‘But it’s not just women, half of my followers are men, who are also really happy to see us entering the trade.’

‘Luckily, the positivity outweighs the negatives in the hundreds of thousands,’ she says.

‘I am really proud of myself. I did not think I would ever be in a position to help anybody. Now I have a platform and something to say and people are listening.’