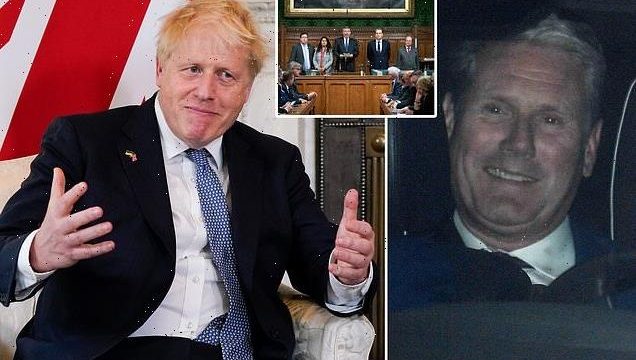 STEPHEN GLOVER: There is a way Boris Johnson can bounce back – cut taxes and give us a real Brexit dividend

Last night’s historic vote was bad for Boris Johnson, bad for the Tory Party and, most important of all, bad for the country.

Out of 359 votes cast, 148 were against the Prime Minister. In proportionate terms, this performance was worse than that of John Major when he was challenged for the leadership in 1995, and much worse than Theresa May’s showing in 2018.

In fact, Boris Johnson’s vote is almost exactly equivalent in proportionate terms to that of Margaret Thatcher when she was ousted from No 10 by Tory MPs in 1990.

On that occasion, her first instinct was to fight on, but after a series of interviews with members of the Cabinet, she was persuaded that the game was over and stood down. 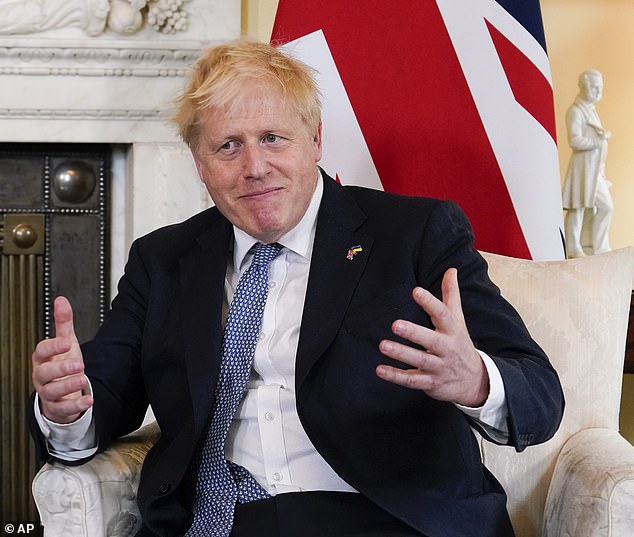 STEPHEN GLOVER: Out of 359 votes cast, 148 were against the Prime Minister. Boris Johnson’s vote is almost exactly equivalent in proportionate terms to that of Margaret Thatcher when she was ousted from No 10 by Tory MPs in 1990

What will Mr Johnson do? He can justly say that he won the contest fair and square, and that he has every right to stay in No 10. And, indeed, under the rules of the Conservative Parliamentary Party, this is absolutely correct.

Moreover, these same rules state that there can be no further challenge to the Prime Minister for another 12 months. There have been attempts in the past to change the regulations, and there might be again.

But it would make the Parliamentary Party look very devious and underhand — although it might not mind that.

The most plausible challenge to the Prime Minister would be — as in the case of Lady Thatcher — a withdrawal of support by some members of the Cabinet.

The difference in this instance is that the current members of the Cabinet are either less independent-minded, or perhaps less disloyal, than was the case in 1990.

If, say, Rishi Sunak should break ranks and set up as a potential leader of the rebels, there would probably be an immediate crumbling of support for the PM and an almost immediate leadership contest.

But it is far from clear that Mr Sunak or any other member of the Cabinet has the chutzpah to act in such a way.

What should happen? I am, as some readers may be aware, far from being Mr Johnson’s greatest fan, and I share most of the criticisms that have been made of him over Partygate. What foolishness he showed — foolishness that it is hard to forgive.

During the Jubilee celebrations, it was impossible not to feel the gulf between the Queen’s sense of duty and integrity and Mr Johnson’s absence of integrity and good sense during the shenanigans in Downing Street.

However, the fact remains that he won, and if he can retain the support of his Cabinet he should be allowed the chance to prove that he is, after all, capable of being a competent and decent leader. It is, of course, a huge call.

In truth, Boris Johnson hasn’t so far been a very successful Prime Minister, and this is a Government that appears to have little sense of political direction. Very few of the opportunities offered by Brexit have yet been taken, and the fear is that they never will be. 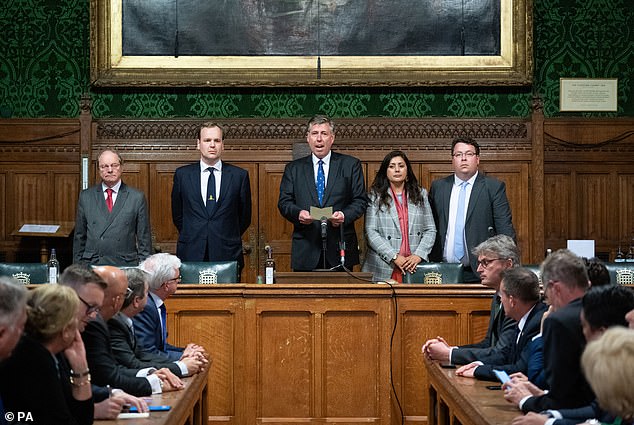 Sir Graham Brady (middle), announces that Boris Johnson has survived the attempt to oust him as party leader following a confidence vote in his leadership at the Houses of Parliament

It is perfectly true that the PM has got several of the big things triumphantly right. He backed Volodymyr Zelensky and the Ukrainian regime with arms, training and vocal support long before the U.S. and at a time when France and Germany were still striving to do a backroom deal with Vladimir Putin.

After presiding over a series of serious errors at the start of the Covid pandemic, Mr Johnson chose the woman who was probably the best-qualified person alive to identify and order the most effective vaccines. As a result, Britain was far quicker than other European countries to begin mass vaccination.

Most notably, of course, he found a way through the Brexit labyrinth and extracted Britain from its most serious constitutional crisis of modern times — no mean achievement — though at the cost of leaving Northern Ireland partly under the sway of Brussels.

When Boris Johnson concentrates on a single formidable issue and throws all his considerable intellectual power into finding the best way forward, history tells us that he can definitely produce the goods.

The trouble is that he often ignores problems until they are put in front of him. He is good at dealing with crises but not at attending to the less dramatic — though vital — challenges with which any successful government must grapple. He is the opposite of being a successful multi-tasker.

Before last night’s vote, he tried to convince backbench Tory MPs not only that he is a ‘winner’ but that he understands ‘delivery’ is ‘what builds trust in a government’. That’s true, of course.

But where is the Brexit dividend? Why hasn’t there been more deregulation since our departure from Brussels? Why have taxes been shooting up under a Conservative government so that, as a percentage of Gross Domestic Product, they are now higher than they were at the end of the post-war Labour government, which was notorious for astronomical taxation?

How can a Tory leader who has professed in the past to believing in a small State and low taxation be allowing the Chancellor — under existing plans — to yank up Corporation Tax next April?

Nor should anyone doubt the contention of innumerable well-informed people in finance and business that the recent windfall tax on energy companies is likely to deter much-needed investment in the UK. 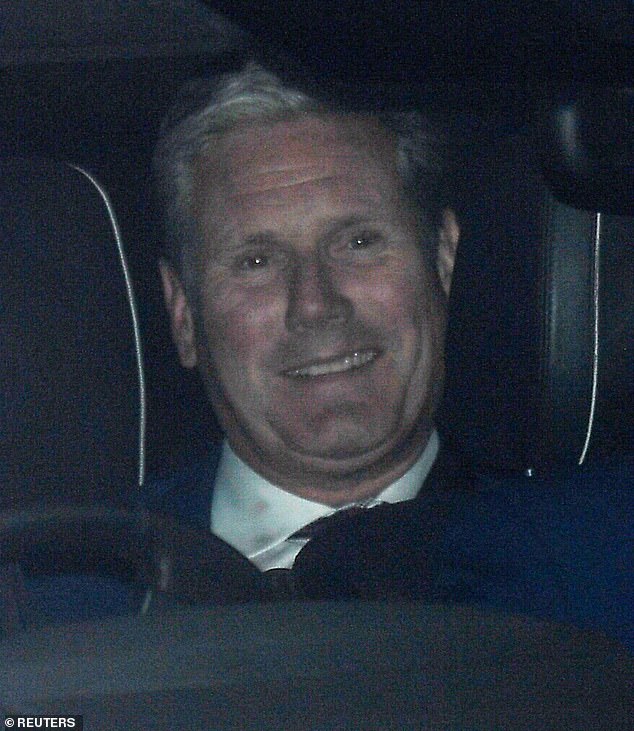 Leader of the British Labour Party, Keir Starmer, leaving the Houses of Parliament on 6 June following the historic vote

Without all its other failings, the Government might have got away with a windfall tax. As it is, it has managed to confirm an impression of a profligate, opportunistic administration whose policies are not driven by consistent principle, and whose favourite political manoeuvre is a U-turn.

Both the Bank of England’s forecast and that of the Office for Budget Responsibility envisage abysmally low growth in the medium to long term.

How depressing. No Tory government should accept the inevitability of such an outcome.

Can Boris, with his short attention span and lack of abiding philosophical beliefs, rescue himself and this sinking Government? For him to do so would require a revolution in behaviour that is difficult to envisage. But it may be worth one last shot.

What I fear is that the battle to get rid of him will intensify over the coming weeks and months, so the Prime Minister won’t even be given the chance to prove that he can govern successfully.

Possibly the plotters will conclude that they acted too early and would have done better to wait until two probable losses for the Tories in by-elections on June 23.

Some of them may have let their dislike of Boris overwhelm their political calculation.

We undoubtedly face more internecine war in the Tory party, which is bound to harm its electoral chances in an election that is only two years away.

I suspect there will be lasting damage to the Tory brand, whether Boris stays or is eventually smoked out of No 10.

The country will suffer because, instead of there being a Government focused on delivery, we will have one that is fighting forest fires as Boris Johnson struggles to survive.

And the country will also suffer because, as a result of last night’s turbulent goings-on, a Labour victory must now be more likely.

So yes — bad for Boris, bad for the Tories and bad for our poor country.