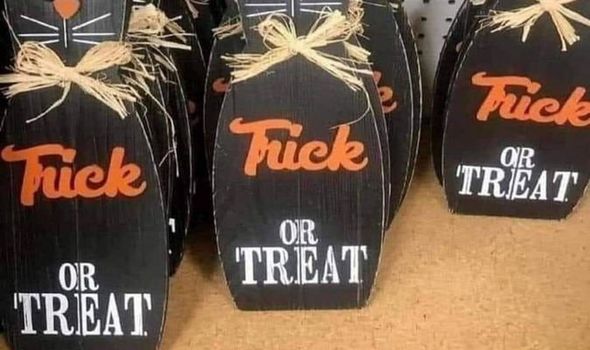 B&M’s Halloween range is on the shelves ahead of this weekend’s celebrations. However, one sign, which is supposed to say ‘Trick or Treat’, looks like it says something much ruder due to an unfortunate choice of font.

They posted a photograph of the Halloween product with the caption: “B&M special haha.”

The post quickly went viral with more than 3,000 upvotes and hundreds of comments.

One amused user responded: “The designer didn’t give a trick.”

Another replied: “I’ll have option one please.” And a third remarked: “What an unfortunate font.”

This is not the first time shoppers have spotted a product blunder in B&M this week.

One of the brand’s star sign mugs, which feature the name and constellation of each of the signs, suffered an embarrassing spelling mistake as Pisces had been spelt ‘Pices’.

A shopper shared a photo on Reddit and left the internet in stitches.

A user said: “I might get this for my mum. She’s a Pisces and a teacher so it will doubly annoy her.”

Another joked: “Did they have any Capricom?” While another asked: “Have they got one for Vingos?”